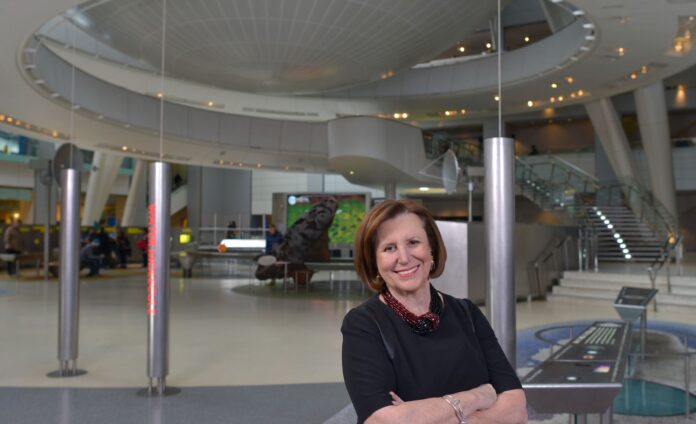 After spending nearly 30 years as president of the American Museum of Natural History, Ellen V. Futter is stepping down. When Futter took the role in 1993, she became the first woman to lead a major New York museum. Futter announced to the board this week that she will step down in March 2023, hoping to coincide her departure with the opening of the museum’s new Richard Gilder Center for Science, Education and Innovation.

“It’s been an incredible run and I just feel so proud and appreciative of my time,” Futter told the New York Times. “The opening of the Gilder Center marks the completion of my work and a good moment for the museum for new leadership.” The museum’s chairman told the Times that the search for a future president would begin immediately, but considering that the museum operates out of a city-owned building on city-owned land, employs over 1,000 people, and has an operating budget of $178m, leading the museum is a uniquely challenging job.

Futter saw the museum through periods of sweeping change, from massive expansions that grew the institution’s reach, to cultural awakenings that led it to rethink some of its more harmful dioramas. In the beginning of 2022, after years of conversation around it, the highly problematic statue of Theodore Roosevelt—which renders the 26th president on horseback, flanked by a Native American and an African man, both of whom are shirtless and on foot—that had stood out front for nearly 80 years was finally removed. (The statue, which is now part of the Theodore Roosevelt Presidential Library in Medora, North Dakota, was technically city property, which is partly why the removal effort was so drawn out.)

Other efforts around cultural rethinking included adding text that attempts to explicitly point out why certain dioramas that include Indiginous people are harmful and misleading. Most recently, the museum unveiled a $19m renovation of its Northwest Coast Hall that incorporates Indigenous perspectives into its displays on the region’s cultures and ecosystems.

Major moments of growth that Futter oversaw include the Rose Center for Earth and Space, which opened in 2000, as well as two accredited degree-granting programs: the museum’s Richard Gilder Graduate School, which has offered PhDs in comparative biology since 2008, as well as their master of arts in teaching earth science, which was established in 2011. Both programs are fully-funded for most students, and the museum notes that half of the New York City public school teachers hired each year with a primary certification in earth science are graduates of their master’s program.

“When I first came here, people would say to me that it was their favorite place, yet nothing ever changes,” Futter says. “I’m proud that they still say happily it’s their favorite place, but things have changed. Not the essential mission of science and education, which is bedrock for us, but how we deliver it.”