Home News Less Than Two Years After It Was First Proposed, the ICA San... 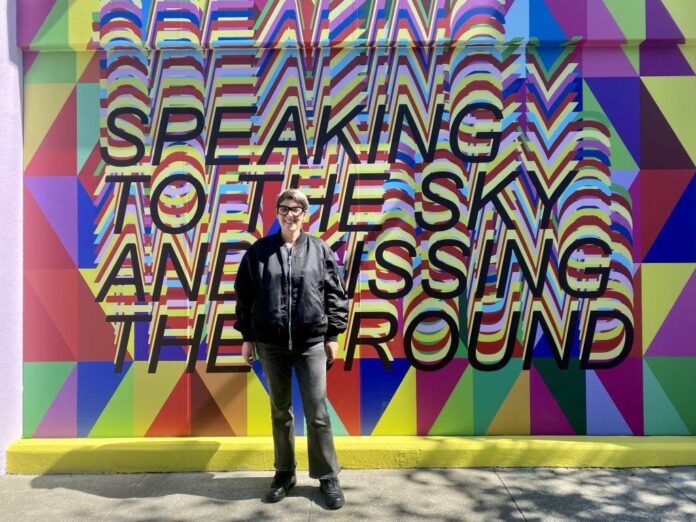 The Bay Area art scene is getting a major boost, thanks to the recent opening of the Institute of Contemporary Art San Francisco, a new museum in the city’s Dogpatch neighborhood that has come together with remarkable speed.

The ICA’s director Alison Gass came up with the idea for the new institution in January 2021, when venture capitalist Andy Rappaport, cofounder of the nearby Minnesota Street Project, asked her if San Francisco would benefit from a non-collecting art museum. They immediately started fundraising, secured a space, and announced the ambitious project in September.

“It was insane. We did this in a year and a half—a year since we got the building,” Gass, formerly head of the ICA San Jose and the Smart Museum of Art in Chicago, told Artnet News during a tour of the 11,000-square-foot space.

The ICA is opening in phases, starting with a show by Jeffrey Gibson, and welcomed some 835 guests on its first day earlier this month. 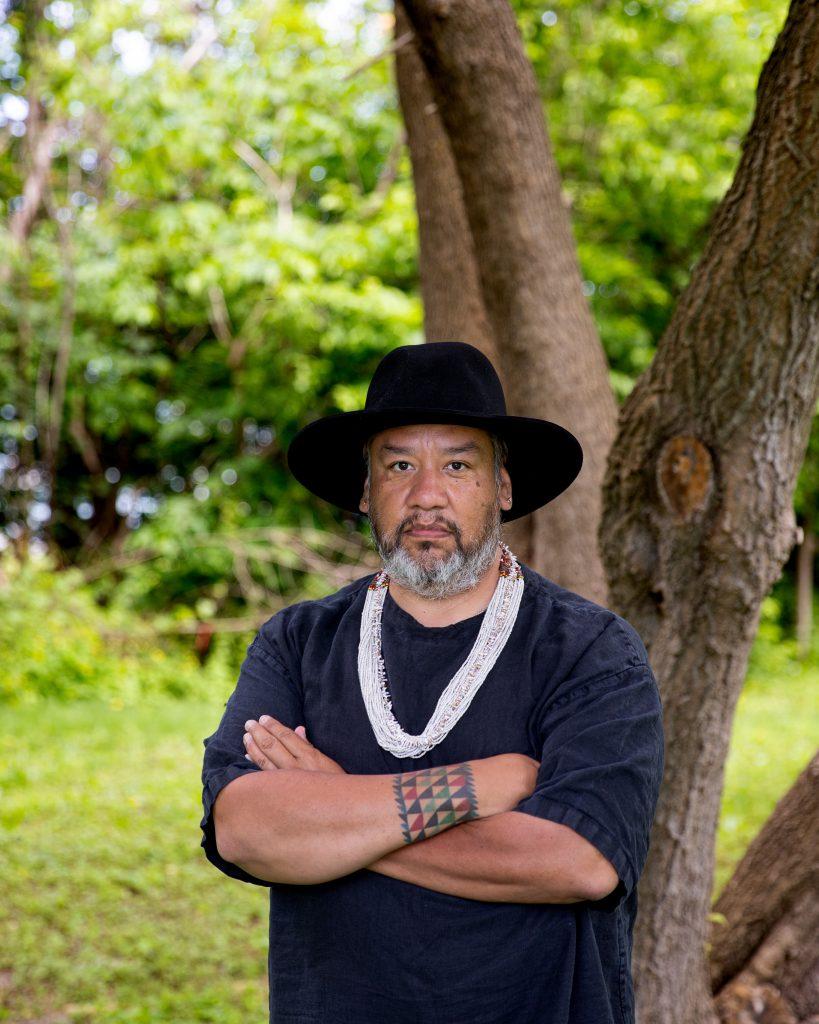 The Choctaw-Cherokee artist is known for his painting and sculpture, and for his embrace of craft, but the centerpiece of the exhibition is his first-ever video work. Titled  (2022), it’s a commission by the museum highlighting the natural beauty of New York’s Hudson Valley, where Gibson lives, across the seasons. It’s accompanied by a soundtrack of music by indigenous performer Joan Henry, as well as natural sounds such as water running, fire crackling, and bees buzzing.

“Jeffrey was very explicit that he wanted to push his practice in a new direction,” Gass said.

“I didn’t know exactly what we would wind up with, and it completely evolved over the course of the year. It became something quite spectacular, that really feels like standing in front of a massive moving painting,” she added, pointing to the geometric collaging of the footage, which cleverly incorporates everything that the artist shot over a period of 10 months into a 10-channel 20-minute film projected on two wall-to-wall screens. “You can recognize all those patterns that you see in his painting and sculpture.” 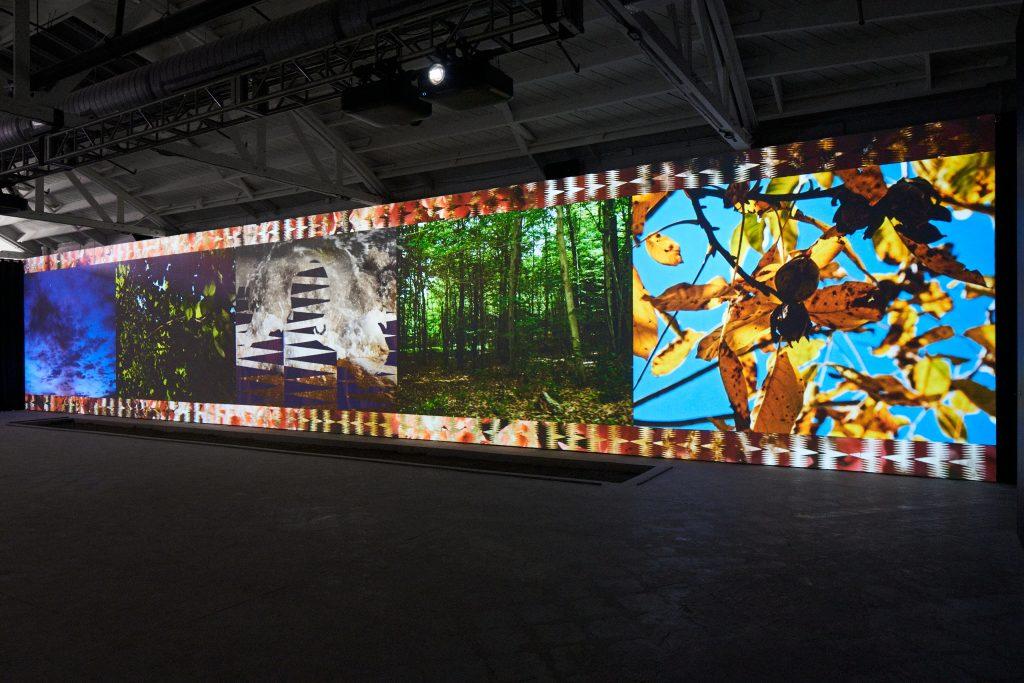 The show starts outside, where Gibson has covered the building’s facade in a colorful, geometric vinyl wrap, that reads “” on one side and “” on the other.

The display continues in a back gallery, where a dying red maple, roots and all, hangs eerily from the ceiling as a recording of Henry singing a mournful elegy to the tree plays.

The unsettling yet beautiful tableau is set against the backdrop of a colorful stained glass window Gibson made from translucent vinyl, which casts an amazing colored light onto the floor depending on the time of day. The project will culminate with the ceremonial burning of the tree, which was sourced from curator Christine Koppes’s yard after it was hit by a drunk driver. 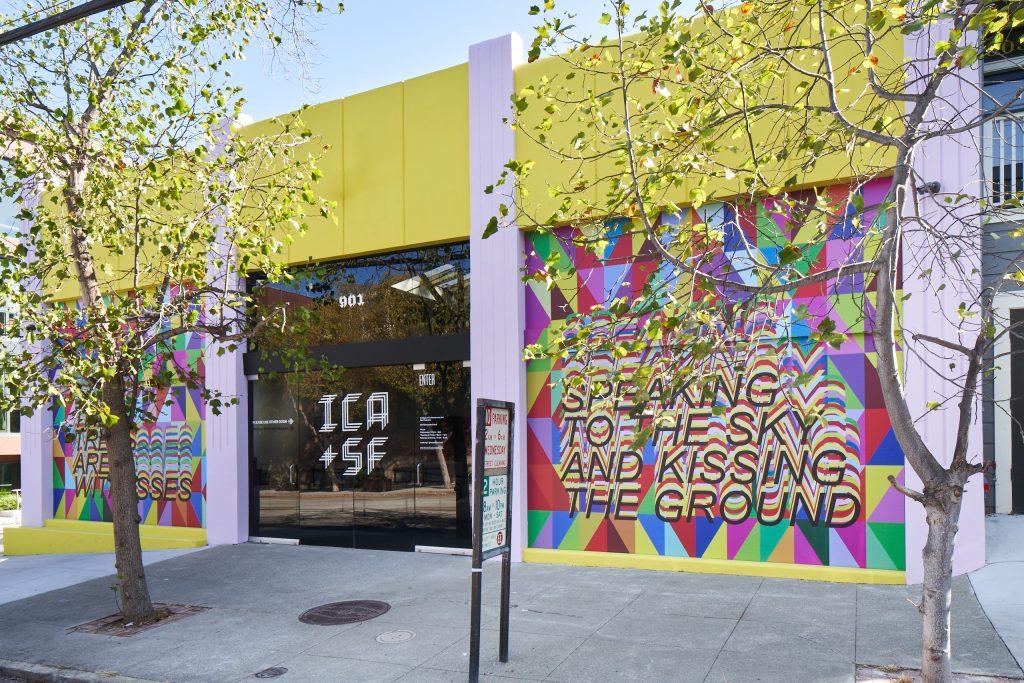 “Jeffrey calls this his most ambitious project to date,” Gass said. “It’s very different from anything he’s done before.”

For Gibson, it was also important that the project incorporate land acknowledgement—and in a more substantial way than a sign on the wall. So he asked Gass if he could excavate a section of the floor in the gallery beneath the video, to commune directly with the ground where the region’s Native Americans once walked.

It was an unconventional request, but an easy one to accommodate.

“There is nothing precious about this found, industrial building’s floor,” Gass said. (The hope is that the work can travel to other institutions, in which case Gibson is potentially open to alternate presentations, such as bringing earth into the gallery, or digging a hole outside.) 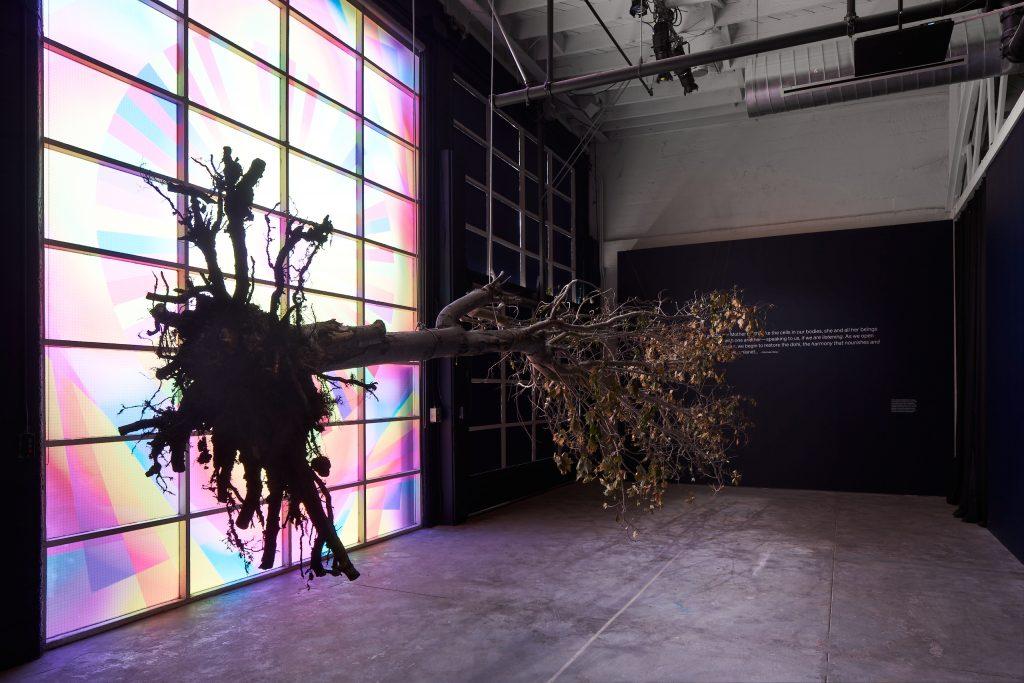 “We are a start up museum opening in some ways still under construction,” Gass said, noting that she likes the idea of making some of the typically behind-the-scenes labor that goes into running a museum visible to visitors. “This is the plus side of the San Francisco start-up culture—patrons were comfortable with taking a risk.”

The building’s industrial roots also went a long way toward allowing the museum to get up and running so quickly. The ICA hired architect E.B. Min to convert the space into a museum, but didn’t want to sink too much money into high-quality flooring or paint. Gass hopes the somewhat barebones surroundings will let the art shine—and allow the museum to prioritize spending on the art and its employees.

The museum will have $3 million annual budget, the bulk of which will go toward commissioning new work, staging exhibitions and programming, and salaries for the six full-time staff members. 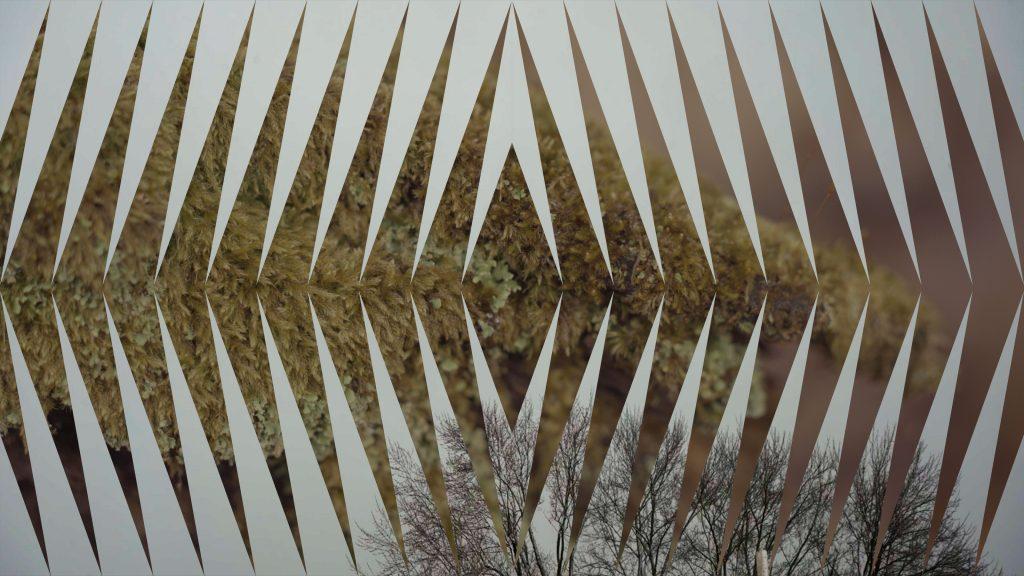 In a field known for its low pay and which has seen widespread labor organization in recent years, the ICA is committed, despite its small size, to paying its employees above-average for the Bay Area—except at the leadership level, which typically sees the largest pay disparity among staffers.

“We’re willing to put a high proportion of our operations budget into salaries,” Gass said.

Moving forward, the museum will also make a commitment to showing California artists, particularly those with ties to the Bay Area. The museum hosted a preview show from January through May featuring Oakland textile artist Chris Martin, and will open in full at the start of 2023. (Both dates are timed to the city’s annual Fog Design and Art fair.)

The front of the building, currently a community lounge and programming space furnished courtesy of Restoration Hardware, will become galleries for the shows “A Weed by Any Other Name,” featuring Oakland artists Liz Hernández and Ryan Whelan, and “Resting Our Eyes,” curated by Tahirah Rasheed, cofounder of the SeeBlackWomxn collective, and Autumn Breon, a Los Angeles artist.

“We’re following the artists and the voices that feel relevant to the moment,” Gass said. “We want to support artists who are ready to step outside of the narrative of their own practice—It feels like the place to do something really experimental.”

See more photos of the museum below. 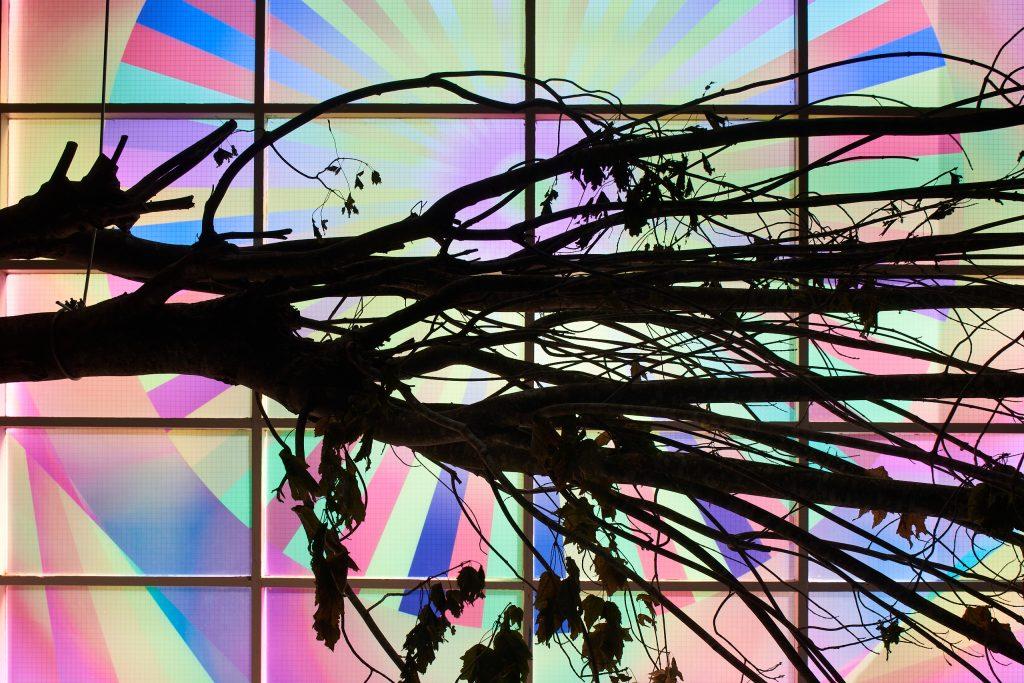 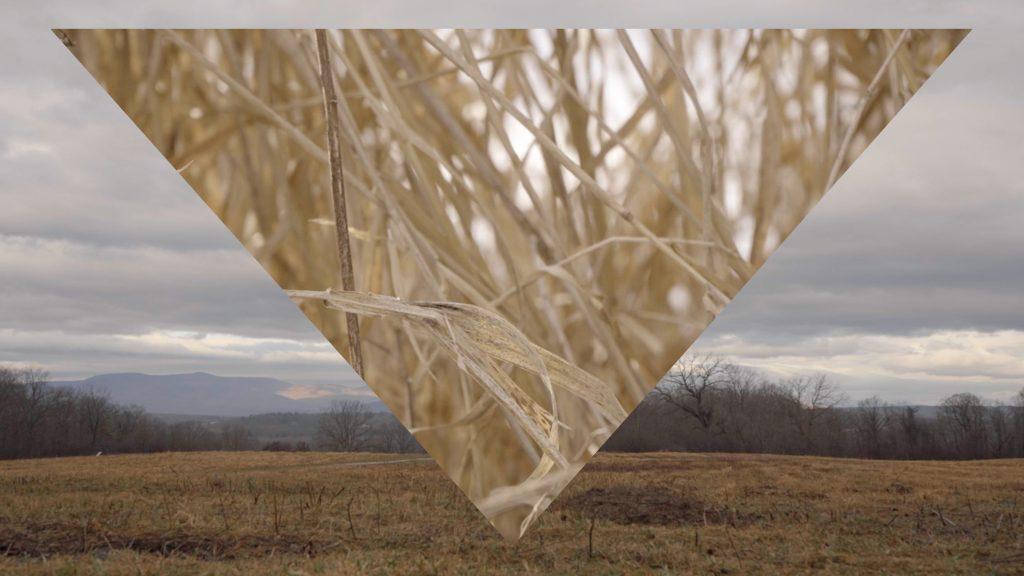 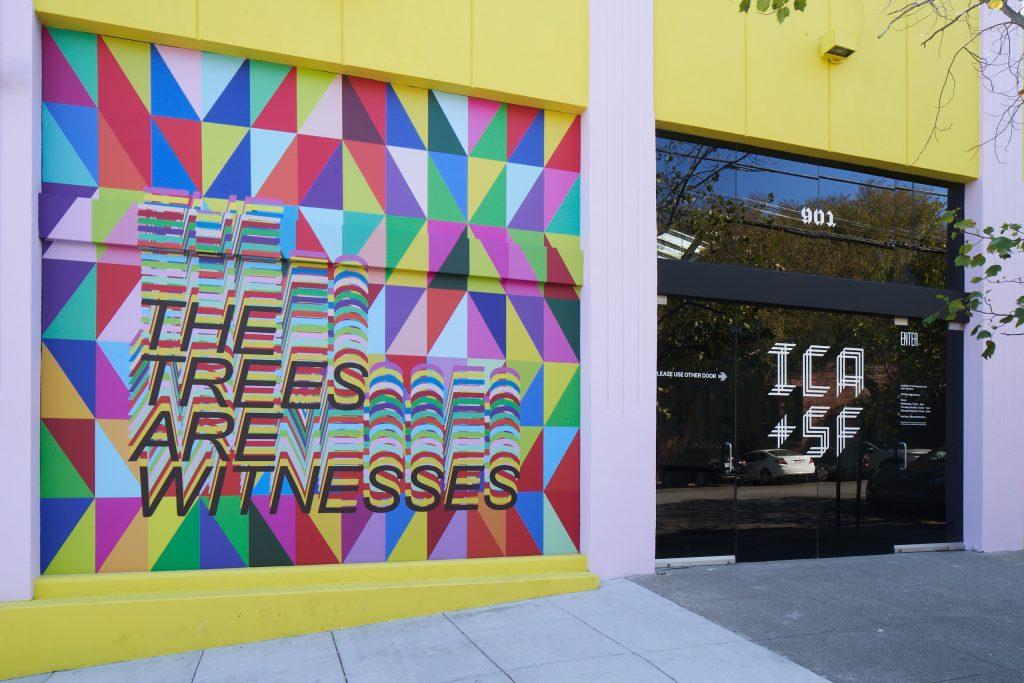 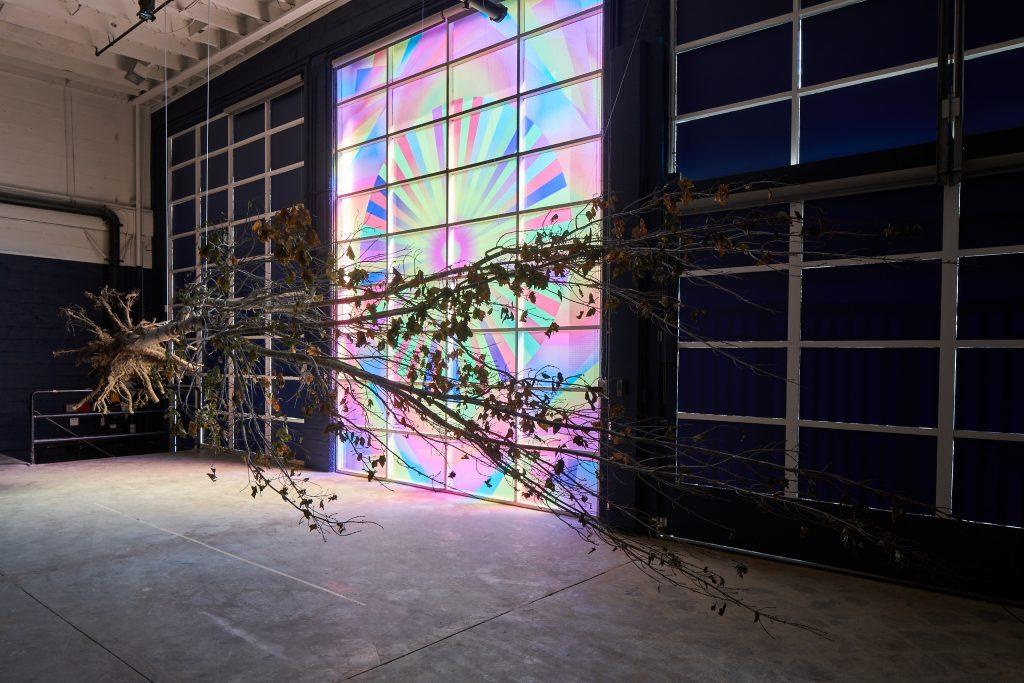 ‘Gift from God’ Elvis is semi-divine, 40 years after death