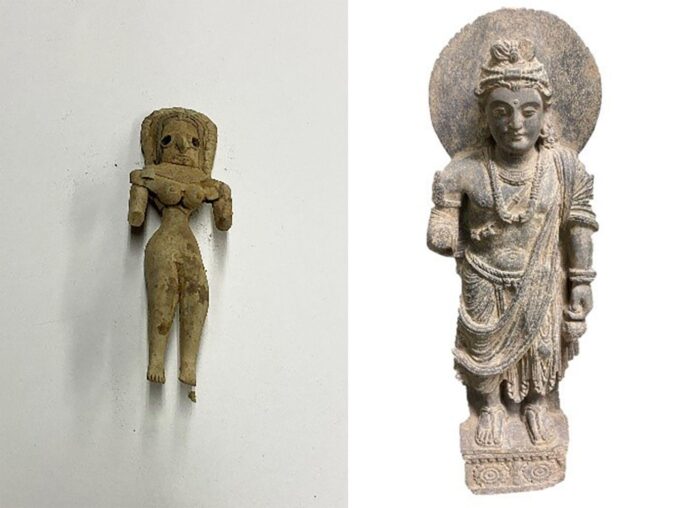 Just days after antiquities trafficker Subhash Kapoor was given a ten-year prison sentence by a court in India, nearly 200 artefacts seized during the Manhattan district attorney’s office investigation into the dealer and his associates have been returned to Pakistan.

The repatriation of 192 objects collectively valued at $3.4m was announced on 10 November. Of those, 187 are tied to Kapoor, his former Madison Avenue gallery Art of the Past and his accomplices in a vast smuggling ring that ensnared collectors and institutions around the world, from New York to Canberra. Since 2011, the district attorney’s office and federal Homeland Security Investigations (HSI) agents have seized more than 2,500 objects worth upwards of $143m linked to Kapoor and his collaborators.

“Subhash Kapoor was one of the world’s most prolific antiquities traffickers, yet thanks to the work of our dedicated investigators and analysts, we have been able to recover thousands of pieces looted by his network,” Manhattan district attorney Alvin L. Bragg, Jr. said in a statement. “We will continue to pursue full accountability against Mr. Kapoor and his co-conspirators, who showed a blatant disregard for the cultural and historic significance of these antiquities.”

The newly repatriated artefacts include several terracotta Mehrgarh dolls, objects dated to between 3500-2600 BCE, making them some of the oldest figures crafted by humans in the world. They were first discovered in 1974 at a Neolithic archaeological site in Pakistan that was subsequently targeted by looters. Also being returned is a Gandharan statue of a maitreya (an enlightened, future Buddha) that was looted from Pakistan and smuggled into New York in the 1990s by traffickers Zahid Parvez Butt and Zeeshan Butt.

The Mehrgarh dolls and Gandharan statue now being returned to Pakistan had been kept in a storage unit rented by individuals affiliated with Art of the Past until its contents were seized earlier this year by agents from the Manhattan district attorney office’s Antiquities Trafficking Unit.

During a ceremony this week at Pakistan’s consulate in New York, consul general Ayesha Ali signed an agreement with Bragg’s office to take possession of the smuggled objects. “We began this journey with the DA’s office and [HSI] in November 2020, 45 pieces of stolen Gandhara artefacts were returned and today we are very fortunate that another batch of 192 antiquities valued at $3.4m are being returned,” Ali said in a statement.

Just over a year ago, Bragg’s office repatriated 235 objects connected with Kapoor to India.