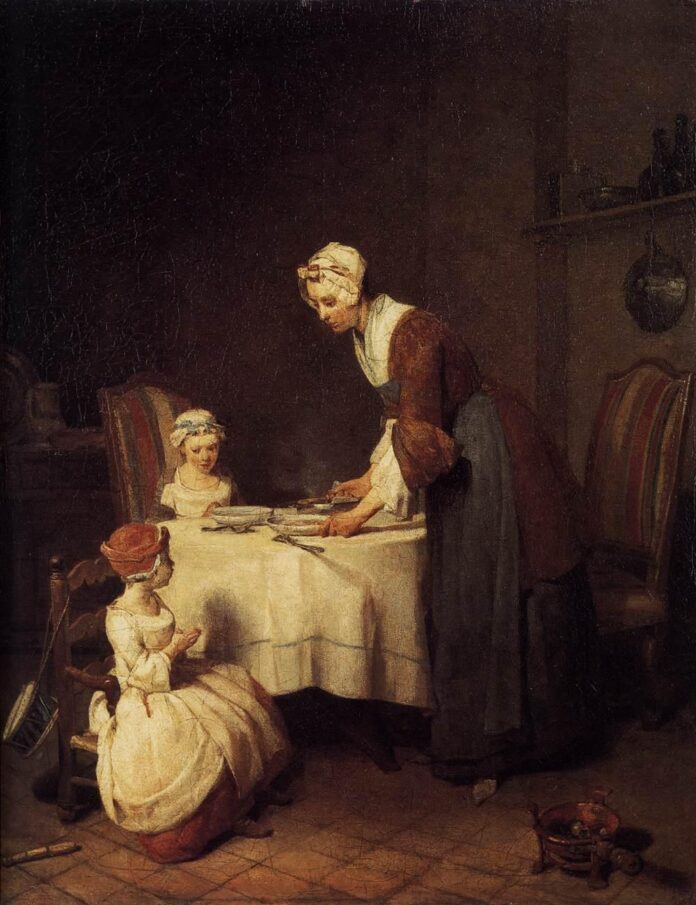 The London-based dealer Simon Dickinson has been cleared of negligence over the sale of La Bénédicité (saying grace, 1744) by the 18th-century French artist Jean-Baptiste-Siméon Chardin.

In a ruling published last week, Judge Simon Gleeson found no sign of breach of duty during the dealer’s representation of the Wemyss Heirlooms Trust in the 2014 sale of the painting for £1.15m, to the Stockholm-based dealer Verner Amell. The work went on to sell for $10.5m (or, rather, $7.5m in cash and the transfer of another painting by Antoine Watteau) just a few months later, to the late Michel David-Weill.

The drastic jump in price was a result of the work’s art historical promotion from a “copie retouchée” (understood by the dealer to mean a work by another, with additions by Chardin) to a work “by Chardin”, in part down to a newly discovered signature that was found in a cleaning between the transactions.

Much debate in court focused on the subtleties of art market terminology and whether distinctions should be drawn between “autograph” and “non-autograph” works, or rather between “wholly” or “partially autograph” works. The judge ultimately preferred the latter line of thinking.

“The description of the painting in the leading expert’s catalogue raisonné for the artist as a ‘copie retouchée’ was entirely consistent with this attribution in the court’s view,” reads a statement from the gallery. “The sale price achieved of £1.15m was also found to be appropriate. The court in the process acknowledged that Mr Dickinson is a recognised expert in Old Master paintings.”

The work had been bought by the Wemyss family in 1751, and there are several versions of it, including one now in the Louvre, Paris, and another in the Hermitage, St Petersburg.

Representatives of the Wemyss Heirlooms Trust said in a written statement that Amanda Feilding, Countess of Wemyss and March, and fellow trustee Vilma Ramsay were “obviously disappointed” and “considering their options for the future in light of the judgement”. It added that the ruling “must raise wider questions about the operation of the art market”.

Whether Dickinson should have contacted the leading authority on the work (Pierre Rosenberg, who published the artist’s catalogue raisonné) prior to his sale of it was considered. While Dickinson had not consulted with Rosenberg on this occasion, the expert is known to have seen the work on numerous occasions previously (once, in 1992, with David Wymess and Dickinson) and the court found that the expert’s opinion that it contained partial elements of Chardin was “admirably consistent”.

The claim that the London dealer had a duty to “warn” the sellers of any lingering questions over the work’s attribution was also largely rejected, with Gleeson stating: “I think that it is entirely reasonable for Dickinson to accept and discharge a mandate of this kind on a discretionary basis without detailed and regular recourse to their principals.”

The court stopped short of making a decision on the work’s attribution (acknowledging that “Chardin worked in a way which could have been calculated to inconvenience the art trade”), but did offer an opinion on the price the painting had gone on to fetch, describing the later figure as inflated and arguing that the market value of a Chardin sat closer to “the vicinity of £5m”.

17 Art Exhibitions Worth Traveling for in Europe This Year, From a Blowout Survey of Yayoi Kusama’s Inflatables to the Largest Showcase of Vermeer’s...

The items are reproductions of the desks and chairs that Wright designed for his landmark Johnson Wax Headquarters.