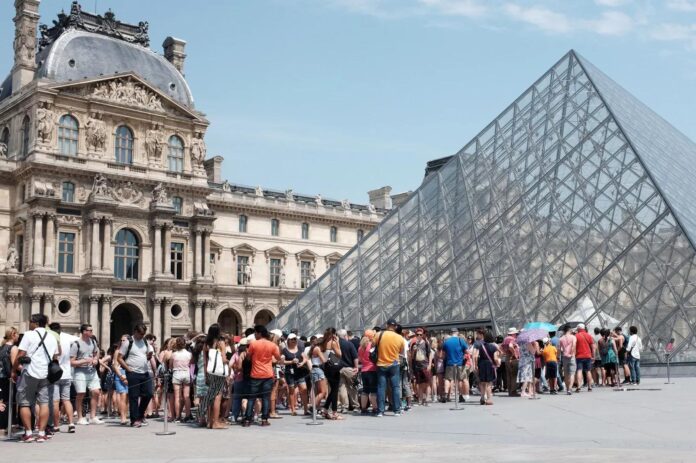 In 2022, the Louvre received 7.8 million visitors—19% less than in 2019, albeit a rise of 170% from 2021 when French museums were closed for nearly five months. But the fall in attendance is not necessarily bad news. The Louvre director Laurence des Cars has hit the pause button and decided to limit daily entries to 30,000. Prior to Covid-19, the museum could welcome up to 45,000 people on its most crowded days. With 80% of tickets now issued via a reservation service, the new policy should stabilise attendance at between 7.5 million and 8 million visitors for 2023, the same levels experienced by the museum around 17 years ago.

In a statement, Des Cars said she opted for the change “so the visit would be a pleasurable experience, especially for first-timers to the museum who make up 60% of entries”. The Louvre, which welcomed around five million visitors at the end of the 1990s, has been struggling for years against over-attendance, and long queues outside the glass pyramid or in front of masterpieces like the Mona Lisa. In recent years, Louvre employees have gone on strike citing “unprecedented deterioration of conditions” amid record crowds.

Although her predecessor, Jean-Luc Martinez, had implemented major works to improve visiting conditions, Des Cars says she is “the first museum director to consciously decide to limit the number of visitors”, taking into account not only the needs of the public but also the staff. As a major two-year renovation of the exhibitions gallery begins this month, the Louvre will not plan any major shows, even with Paris set to receive around ten millions visitors for the Olympic Games in summer 2024.

Des Cars had also announced, when she was appointed in 2021, that she wished to close the museum one hour later every day (7 pm), in order to attract more local visitors, but this will not take place before careful planning, including discussions with the unions, according to an informed source. The Louvre, which has about 2,000 employees, has promised to hire 90 agents in 2023 to take the proposal forward.

Normally, ticketing accounts for almost one third of the €200m annual budget of the Louvre, half of which is subsidised by the state. Without detailing the financial impact of the fall in attendance, a museum spokesperson tells The Art Newspaper that “the museum met its expectations”. According to De Cars’s statement, “the state’s endowment will be increased from €84m to €93m, but this is destined to help the museum to face rising energy costs, which amount to €10m”. She adds that the government has provided €120m of exceptional help to the Louvre since 2020.

Of Louvre visitors last year, 70% were foreigners who resumed travelling, mostly Americans (rising to 18% of the total) and Europeans (27% from UK, Germany, Italy and Spain). However, there were almost no visitors from China, although it accounted for between 8 and 10% of the total before the pandemic. On the whole, attendance fell by 24% compared to 2018, when the museum reached an historical record of more than 10m entries. In December, the average daily attendance was 25,000 before rising to 30,000 over the Christmas and New Year’s period.

The 2022 visitor totals confirm the return of tourism in Paris, a trend also reflected in ticket sales to other leading cultural sites. For example, the Château de Versailles registered 6.9m entries last year, 77% of them foreigners, while the Centre Pompidou welcomed 3m. The numbers for these two institutions were respectively 16% and 10% less than in 2019, but the results are still better than expected. The French culture ministry had been planning for a fall in attendance of 50% in 2022 (compared to 2019), a third in 2023 and less than 20% in 2024.