Home News Artists and Activists Banded Together to Tell Abortion Stories at an Impassioned... 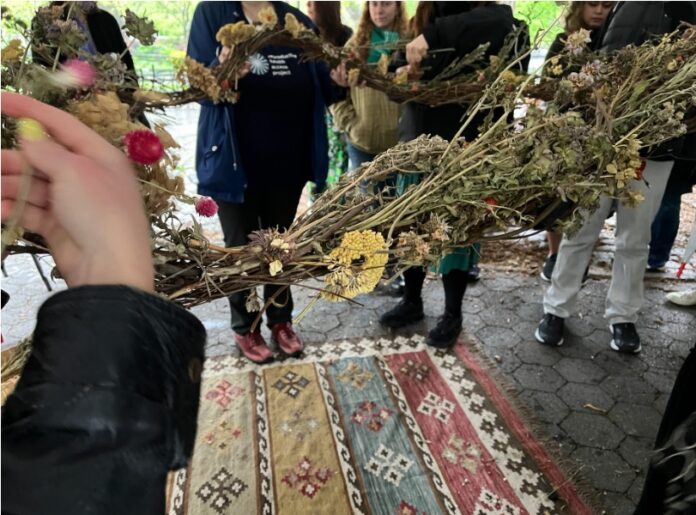 When Politico leaked a draft opinion from the Supreme Court which signaled that the Justices would be overturning Roe v Wade, there was little response from the art world and its institutions. Fairs held in New York last week, like NADA, TEFAF, and Independent, opened to the usual fanfare. But a much different mood was on display at an abortion-themed art event that was held simultaneously in the East Village.

Organized by writer Cassandra Neyenesch, the event, titled Abortion Stories, took place from May 6 to 8, hosting events in Tompkins Square Park. The proceedings extended to Cindy Rucker Gallery, where a group show included feminist artists like Lena Chen, Rebecca Goyette, and Christian Clifford, whose work I Want Your Blood (2013–19), an installation featuring perfume bottles filled with menstrual blood, was previously shown at “Abortion Is Normal,” a 2020 show that now seems even more prescient than it did before.

“I started planning this a year ago when it looked like we were seeing the writing on the wall with SCOTUS,” said Neyenesch, referencing the Texas Heartbeat Bill that all but banned abortions in the state. “I felt it in my bones. This wasn’t going to go well.”

Cindy Rucker agreed to have the exhibit go up at the gallery for a weekend, though the timing with the leak and the arrival of fairs in New York was a coincidence. Abortion Stories highlighted the work of feminist artists that focused on reproductive rights, which Neyenesch said has long been “dismissed and overlooked as women’s stuff.”

The event kicked off with a long session where people who have had abortions were invited to tell their stories. Women who had survived pre-Roe abortions were particularly enraged and full of grief. “Some of these women are 70, 80 years old and can’t believe that this is happening again,” said Neyenesch.

Afterward, Lena Chen led We Lived the Gaps Between the Stories, a performance intended to express gratitude for abortion workers. The piece was adapted from work she had made while she was in residence at Wave Pool Gallery. The initial work resembled a large wreath within which herbs associated with reproductive health have been interwoven.

At the event, abortion providers and educators held the wreath as people wove more of these plants into the large structure, eventually taking it from the providers and lifting it over their heads. Meanwhile, Chen read a piece she had written based on letters of gratitude toward abortion providers that she had collected during her residency.

“I was inspired to do this piece after I helped my friend through a very painful abortion process,” said Chen as she passed her 10-week-old son over to artist Christian Clifford. “I was happy to be there to support my friend, but if it was exhausting for me after just one day, how must abortion providers feel?”