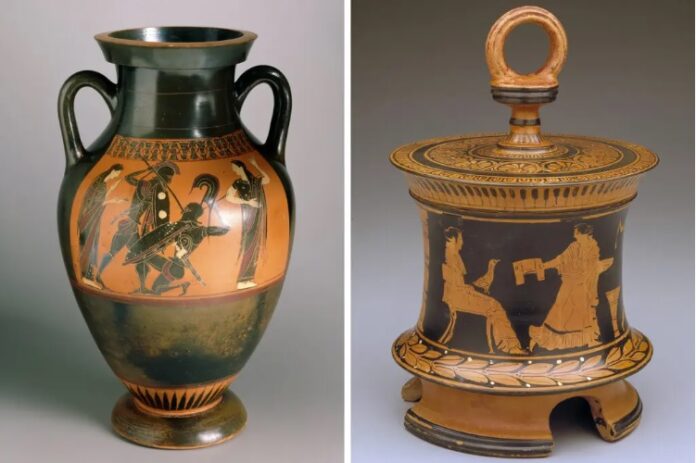 Brian Hernandez, 21, is accused of smashing a door with a steel chair and damaging items with an estimated value of $1 million or more, museum officials said.

A man smashed his way into the Dallas Museum of Art and damaged three ancient Greek artifacts dating to the 5th and 6th centuries B.C., museum officials said on Thursday.

The man, identified by the Dallas police as Brian Hernandez, 21, “seriously damaged” four pieces of art, Agustin Arteaga, the museum’s director, said in an interview. He had broken into the museum by repeatedly striking a glass door with a steel chair around 10 p.m. Wednesday, Mr. Arteaga said.

Mr. Arteaga estimated that the items, which were insured, have a value of $1 million or more, but the true cost of the destruction will not be known until officials and insurers conduct a damage assessment.

“There was no intention, from what we can see, of stealing anything, of damaging any work of art in a deliberate way,” Mr. Arteaga said. “It was just someone who was going through a moment of anger and found this as a way to express it.”

Museum officials called the vandalism “isolated” and the product of a single person acting alone. They said that the Dallas police arrested the suspect at the scene, no one was injured and the man was not carrying weapons.

“While we are devastated by this incident, we are grateful that no one was harmed,” museum officials said in a statement.

The Dallas police said that Mr. Hernandez was charged with criminal mischief, a felony. He could not immediately be reached and it was unclear whether he had a lawyer.

The damage at the Dallas museum was not the only destructive act in the art world this week that set museum security officials on edge. On Sunday, a man dressed as a woman sprang from a wheelchair at the Louvre in Paris and began pounding on the glass shielding the Mona Lisa before smearing what appeared to be cake over the glass. The painting was not damaged, museum officials said.

In Dallas, Mr. Arteaga said he did not want the damage to distract from the mission of the museum, which features a collection of more than 25,000 items spanning about 5,000 years.

“Museums are here to protect, preserve and store the best creations of humanity,” he said. “We do that in order to provide understanding of where we came from and what we can do in the future to become a better society.”

On Thursday morning, about 13 hours after the break-in, the museum’s doors opened to the public at the regularly scheduled time.

A full-time, London-based position has opened up for a driven professional who can develop and deliver a successful commercial strategy