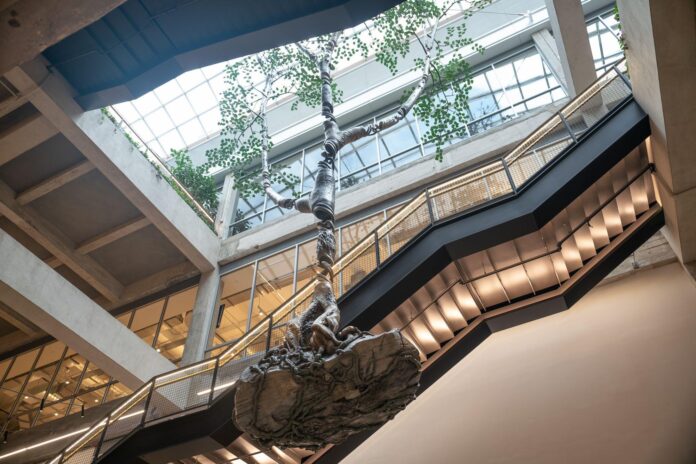 When Meta workers move into their sprawling new Manhattan office complex in the historic James A. Farley Building in a few weeks, they will pass large-scale art installations including a painted mural of various ecosystems by artist couple Esteban Cabeza de Baca and Heidi Howard, bright textile swaths inspired by New York’s streetscapes by Liz Collins and an intricate, symbol-filled multi-panel painting by Matthew Kirk. Emerging into the complex’s main communal space, a multi-storey atrium, they will come face-to-roots with a towering, suspended tree installation by Timur Si-Qin and, just beyond, a sculpture and mural by Baseera Khan.

“It’s not a traditional corporate art collection,” says Tina Vaz, the head of Meta Open Arts, the tech giant’s arts and culture branch. “We think of artists as small businesses, and so much of what Meta is about is helping small businesses thrive, so we see these commissions as an extension of that.”

The offices, which span more than 700,000 sq. ft across five levels of the 1914 post office building, will have room for several thousand workers on any given day, serving as Meta’s New York City hub. The complex’s most eye-catching art commission, spanning several of those floors, is Si-Qin’s 50ft-tall Sacred Footprint (2022), a suspended two-ton steel and aluminium sculpture of a tree whose branches and trunk appear to dissolve into DNA-like helixes in certain places.

The artist scanned various tree species in upstate New York to develop the sculpture’s form, then used a variety of techniques including metal casting and 3D-printing to realise the work, whose suspension was itself a major feat of engineering. “Artists are the original hackers,” says Vaz. “They’re trying things that haven’t been done.”

Facing Si-Qin’s work in the office’s main atrium is a new work from Khan’s series of sculptures based on the form of a Corinthian column, albeit one that seems to have been toppled and wrapped in handmade silk rugs from Kashmir. The work offers a sharp commentary not only on the enduring legacies of empire (from the Roman to the British and beyond), but also on Western societies’ practice of exoticising cultures other than their own. The rugs’ patterns served as the basis for a mural the artist painted across several adjacent walls.

Installations by De Baca and Howard, Collins and Kirk frame the three main entrances to the office complex. Workers entering from the adjacent Moynihan Hall train station and adjacent Penn Station transit complex may find themselves noticing new details in Kirk’s paintings each day. The Queens-based artist, who is an enrolled member of the Navajo nation, took inspiration from the grid structure of traditional weavings to create two huge works, the 8ft-wide A Distant Lie and 22ft-long A Shadow of a Shadow (both 2022). He affixed hundreds of paintings on panels composed of construction materials onto grids of rebar for a quilt-like effect that brings together elements of the Navajo language, superhero iconography, cross-cultural symbols and more.

The works Meta has commissioned for its New York headquarters are notably very tactile and analogue, tangible amenities for a workforce that, like most, has become very comfortable working remotely for the past two and a half years. “This work helps to carry the culture” within the company, Vaz says.

She adds, “One of our challenges and opportunities is communicating this work to our remote team members.” As a result, Meta Open Arts also commissions works for the company’s various apps and online platforms—which include Facebook, Instagram, WhatsApp and others. And given that the company that has staked much of its future on virtual reality and the metaverse, coming commissions may place increasing importance on how the art will manifest in digital work spaces. “We’re always thinking about how we bring the commissioned art into these virtual work rooms,” Vaz says. “The commissions are the foundation of our work with artists, but we’re also working with artists to make work for our apps.”

In the interim, commuters passing through the Farley Building will not need to don Oculus headsets to catch glimpses of Meta’s latest commissions, three of which will be visible from public areas of the building once the office opens in early autumn.

7 Questions for Italian Conceptual Painter Emilio Isgrò, Who Sees Erasing a Word as ‘Setting It Free’