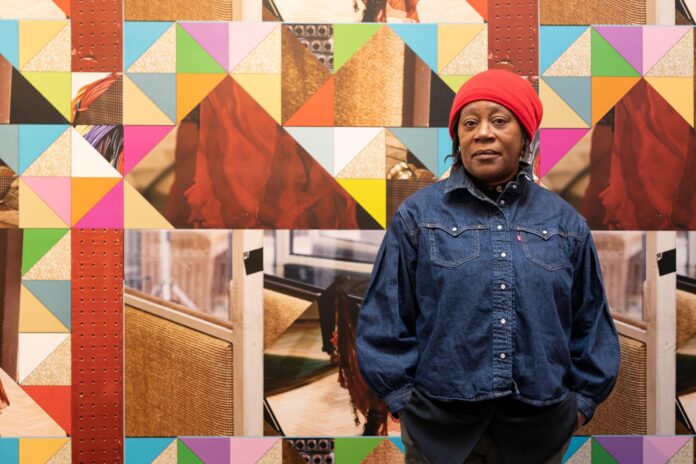 One of the Venice Biennale’s hottest tickets—Sonia Boyce’s exhibition at the British pavilion melding video, collage and music—will be shown next year at two UK venues.

Boyce’s exhibition, which won the prestigious Golden Lion award for the “Best National Participation” at this year’s biennale, will be presented at the Turner Contemporary in Margate (4 February-7 May) and Leeds Art Gallery (25 May-5 November). The Venice Biennale closes on 27 November.

Boyce’s work Feeling Her Way (2022) features a chorus of Black female voices set against tessellating wallpaper and golden 3D geometric structures. “The rooms of the pavilion are filled with sounds—sometimes harmonious, sometimes clashing—embodying feelings of freedom, power and vulnerability,” says a statement from the British Council, which commissioned the work.

The exhibition features on the upcoming BBC documentary series Imagine, which airs on 7 November on BBC One. The episode will examine her life’s work and legacy (in 1987, when she was just 25, Boyce became the first Black female artist to enter the Tate’s collection when the museum bought her drawing, Missionary Position II [1985], for an undisclosed sum) as well as documenting her preparation of the exhibition for the Biennale.

The Venice platform has meanwhile boosted Boyce’s commercial and critical profile. Simon Lee gallery in London, is giving Boyce her first solo show with the gallery (Just for the Record, until 16 December); the London dealer announced his representation of the artist in May 2021, telling The Art Newspaper at the time: “We look forward to amplifying Sonia’s vital and urgent voice, to build a legacy for her practice at an international level.” (Boyce continues to be represented by Apalazzo Gallery in Italy.)