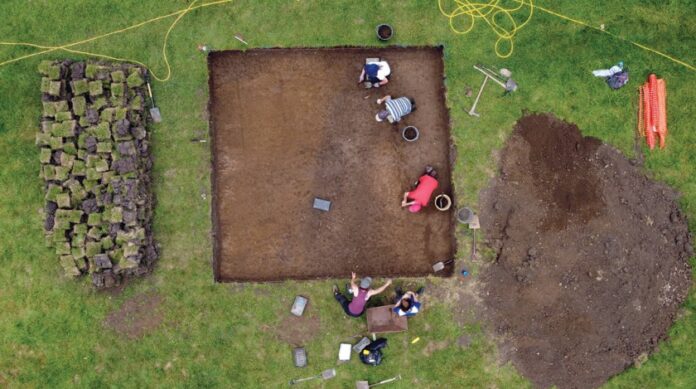 During the excavation, the team uncovered some of the layout of the monastery, showing that it was organised into a series of zones that were demarcated by ditched boundaries.

The remains of an Anglo-Saxon monastery have been revealed on the banks of the Thames, in the village of Cookham, Berkshire. They are believed to represent the monastery that was once headed by Queen Cynethryth, who became an abbess after the death of her husband, King Offa of Mercia, in AD 796.

Archaeologists from the University of Reading, along with local volunteers, made the discovery this past August while excavating on the grounds of the Holy Trinity Church in Cookham. It had previously been speculated that this might have been the location of the monastery, but it had never been confirmed until now. During the Anglo-Saxon period, monasteries were frequently established along the route of the Thames, and this position was particularly important as it is located at the boundary between the kingdoms of Mercia and Wessex – meaning the monastery is likely to have had held a position of strategic and political importance.

During the excavation, the team uncovered some of the layout of the monastery, showing that it was organised into a series of zones that were demarcated by ditched boundaries. Timber buildings were found in one of these zones and, based on the domestic nature of some of the finds in this area, probably once housed some of the inhabitants of the monastery. They also discovered an area of the site that may have been reserved for industrial activity, as suggested by a series of hearths that appear to have been used for metalworking.

Commenting on the discovery, Dr Gabor Thomas, who led the excavation, said: ‘Despite its documented royal associations, barely anything is known about what life was like at this monastery, or others on this stretch of the Thames, due to a lack of archaeological evidence. The items that have been uncovered will allow us to piece together a detailed impression of how the monks and nuns who lived here ate, worked, and dressed. This will shed light on how Anglo-Saxon monasteries were organised and what life was like in them.’

This discovery was announced just as this issue was going to press, but we hope to bring you more details of the site in a future issue – watch this space.