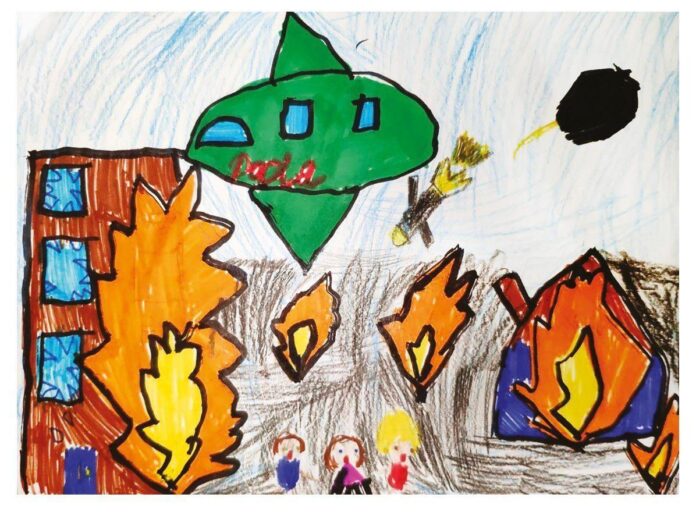 The show “Mum, I Don’t Want War”—on display in 16 cities across Poland, including Warsaw and the border town of Przemyśl, a major port of arrival for Ukrainian refugees—emphasises the shared experiences of occupation, repression and resistance, as well as an enduring faith in victory. The drawings constitute a moving testimony of war, highlighting its particularly brutal impact upon society’s youngest members.

The show is a joint initiative between Poland’s National Archives and the Ukrainian digital project “Mom, I See War”. Poland’s National Archives hold more than 7,000 children’s drawings from 1946, produced as part of a post-war initiative to enable young Poles to process their trauma from the Nazi occupation. Similarly, the “Mom, I See War” project has collected more than 13,500 children’s drawings since the beginning of Russia’s invasion in February. Its founders intend to produce a permanent digital collage of Ukrainian children’s artworks—simultaneously spreading awareness of Ukraine’s plight and raising funds for humanitarian aid. Once completed, the collage will be auctioned as an NFT, with all proceeds going towards Ukrainian children’s charities.

Although produced nearly a century apart, the similarity between the contemporary and historical children’s drawings is “shocking”, according to Paweł Pietrzyk, the director of Poland’s National Archives. “Children draw tanks, planes, fires and explosions. They draw the wounded and the dead, ruined houses and graves. They draw themselves and their families. They draw evacuation and escape. But they also draw images of hope and of their dreams for the future.”

Alongside drawings, the exhibition features personal testimony from Polish and Ukrainian children regarding their wartime experiences. Nine-year-old Zlata from Myronivka, southeast of Kyiv, writes: “I want to see the sun, not basement walls”. Valeriia, 13, from Lviv, writes: “I would never have thought that the joy of childhood would be overshadowed by the war.” Anhelina, 15, from Lutsk in western Ukraine, writes: “They wanted to make us panic, but we have united and we are not afraid.”

The exhibition is accompanied by a quotation from the Polish, Jewish educator and children’s advocate Janusz Korczak, who was murdered at Treblinka extermination camp in 1942: “A child is not a soldier. He does not defend his homeland, though he suffers with it.”

Things to Know About Salvador Dalí