Tehran Museum Puts Western Art on Display – The Tehran Museum of Contemporary Art has taken 19th- and 20th-century American and European Minimalist and conceptual masterpieces out of storage this summer for display, despite the Islamic republic’s condemnation of Western culture. Works by Donald Judd and Sol LeWitt are among the 130 pieces on view in the exhibition, to which more than 17,000 people have visited. (Guardian)

How Anna Weyant’s Success Reveals Art-World Misogyny – Night Gallery co-owner Mieke Marple has penned an op-ed spearing the art media for linking painter Anna Weyant’s roaring success in the market to the fact that the 27-year-old is allegedly dating her 77-year-old dealer, Larry Gagosian. Media have depicted Weyant as wide-eyed and naive, or cold and calculating, the op-ed argues, failing to acknowledge that gaining temporary success is not the same as gaining real power. Marple writes: “What if we acknowledged that in the art world, which continues to suffer from gender imbalances, a woman attaching herself to a powerful man is not gross, but one simply adhering to the terms of a sexist system?” ()

Ken Griffin Reveals Why He Outbid the ConstitutionDAO – Hedge fund billionaire Ken Griffin has said he outbid the 17,000-member DAO to buy a first-edition copy of the U.S. constitution because he was afraid the collective competing for the document would not be able to “manage the responsibilities necessary to protect” it. He scored the document for for $43.2 million, an assured win helped by the fact that the ConstitutionDAO’s public crowdfunding had revealed their hand by divulging their maximum possible bid. After his win, he said he tried to offer the DAO a say in where the document got shown, but that the deal fizzled out. It is now on loan to the Crystal Bridges Museum of Art. (

Dallas’s Art World Still Has a #MeToo Problem – Curator Gavin Delahunty left his role at the Dallas Museum of Art in 2017 amid allegations of inappropriate sexual behavior and harassment that supposedly earned him the nickname “Grabbin’ Gavin.” This summer he was quietly appointed curator at Dallas Contemporary in a behind-the-scenes curatorial role, but when news leaked to the press he stepped away from the contract. Lauren Smart writes about how the move betrays a misogynistic mindset and blind-eye culture still rife in the Texan city. “What kind of ‘inappropriate behavior’ did the executive committee think caused Delahunty to leave the DMA?” Lauren Smart asks. “Did they think he left the museum for a few bad jokes? Did they think our collective memory had lapsed? Did they think we wouldn’t care?” ()

Paris Internationale Announces Exhibitors – The Paris Internationale fair for emerging galleries is moving to a new venue at the former studio of pioneering French photographer Nadar. The five-floor historic building at 35 Boulevard des Capucines once hosted the first Impressionist exhibition back in 1874. The event will welcome 16 new exhibitors among its 58 participating galleries, between October 19 to 23. ()

U.K. Places Export Bar on Il Morazzone Painting – The government has temporarily blocked a Pier Francesco Mazzucchelli (a.k.a. il Morazzone) painting from leaving the country in order to buy time for a U.K. museum or institution to acquire it. depicting a horse and an easel with a painter’s palette, first appeared on the art market in 2020, and is a rare example of 17th-century Lombard art. It has been valued at around £2 million ($2.4 million). (Press release)

This Art Saves (Sea) Lives – For a new series of three public sculptures in Portland, Maine—famous for its lobster rolls—artist Pamela Moulton has salvaged 10 tons of nets, ropes, and other fishing gear from the bottom of the Gulf of Maine, where it is said that 10 percent of all lobster traps are sunk. The project, “Beneath the Forest, Beneath the Sea,” was realized with the collaboration of 5,600 local residents, and is “an underwater arboretum crossed with outer space creatures,” according to the artist. 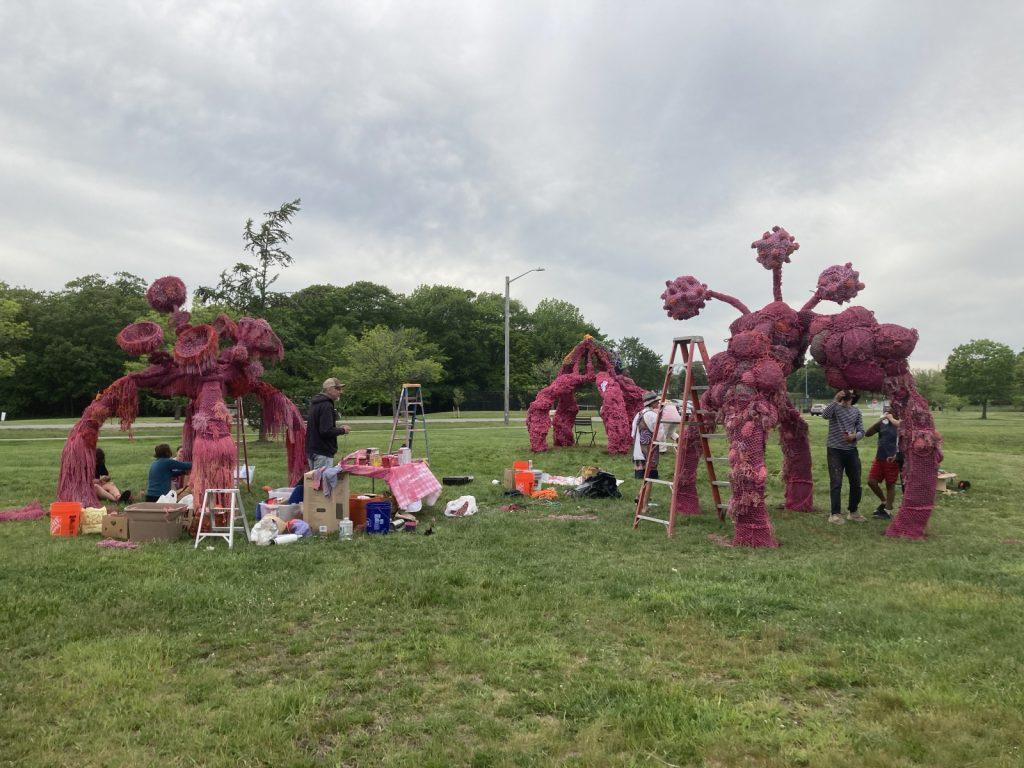 5 Must-See Art Shows Around the World