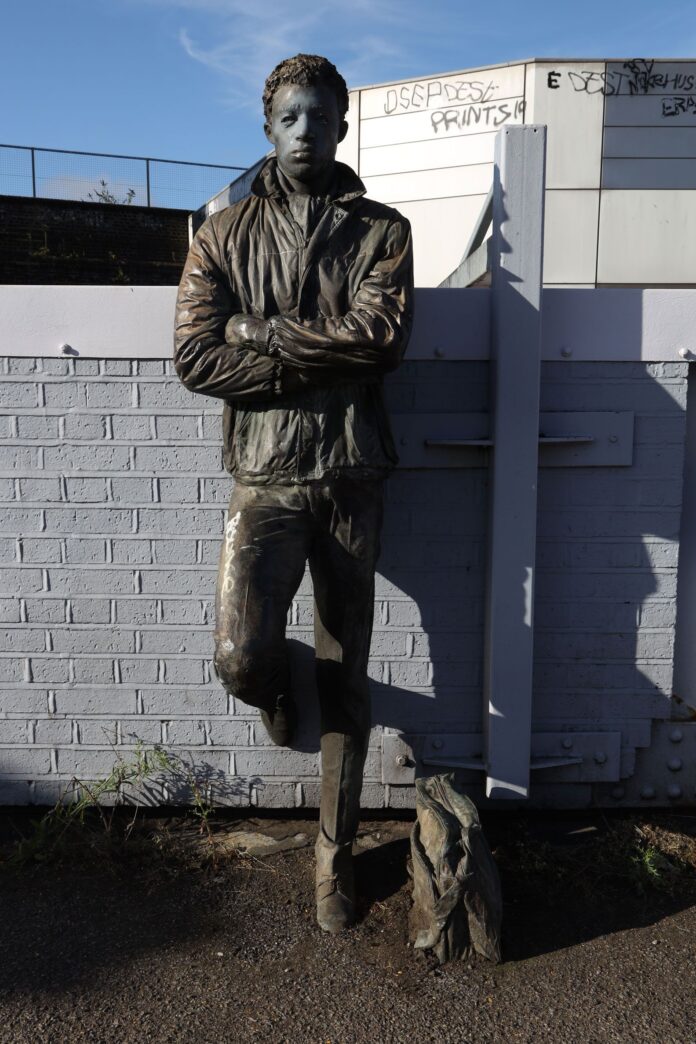 The art education charity Art UK has put online for the first time 13,500 public sculptures in the UK as part of an ambitious five-year project involving more than 500 photography and data volunteers.

The new database includes images of works by established sculptors such as Antony Gormley, Henry Moore and Barbara Hepworth as well as depictions of pop stars like the Bee Gees. Other pieces depicting the palaeontologist Mary Anning in Lyme Regis and Basil Watson’s National Windrush Monument recently unveiled at Waterloo station in London are included.

But the research reveals that just 2% of public sculptures of named individuals across the UK—around 2,600 works—are of people of ethnic minority backgrounds. Crucially, 77.5% of the named public statuary is dedicated to men, while only 17% are dedicated to women (the remaining 5.5% are dedicated to both men and women). “The statistics are shocking without doubt,” says Andrew Ellis, the director of Art UK.

Rare examples of people of colour commemorated in public sculptures and monuments include Betty Campbell (1934–2017), Wales’ first Black head teacher, located close to Cardiff Central train station. Another is the bronze Platform Piece 1 (1985) by Kevin Atherton, which depicts a young black man waiting on the platform at Brixton train station.

The new database is timely, providing essential information over controversial public sculptures fuelled by the government’s “retain and explain” approach towards heritage, which some critics say is part of an “anti-woke” agenda.

Queen Victoria is the monarch with most public monuments and sculptures in her image, numbering more than 175 works. Five monuments of the Indian independence leader Mahatma Gandhi (1869-1948) stand in London’s Westminster and Camden, Greater Manchester, Cardiff and Hull.

Meanwhile another sculpture in Hull, called True Love, honours two Inuit people, Memiadluk and Uckaluk, who arrived in the city in 1847 aboard the local whaling ship Truelove. Details can also be found on the database about a bronze statue by Auguste Rodin, Eve (1882), situated outside a branch of Nando’s in Harlow, Essex.

“Analysing these sculpture records tells us a great deal about our country’s history and who we choose to commemorate, highlighting how our public art should become more representative,” says the Art UK deputy director Katey Goodwin in a statement.

“Each part of the UK reflects its own identity, industries and local heroes in the monuments it builds. This ground-breaking database can be used for research for years to come and will grow as new public sculptures are unveiled across the UK,” she adds.

The database will also contribute to the protection and preservation of the outdoor sculptures, claims Art UK. Project funders include the National Lottery Heritage Fund, Arts Council England, the Henry Moore Foundation and the Scottish government (the project cost is undisclosed).

Art UK also says that work is almost complete on recording all sculptures of the last thousand years housed in UK public collections, with 36,000 examples currently online (these works will be recorded in a similar way to Art UK’s paintings documentation project, covering institutions such as museums, universities and civic buildings, says Andrew Ellis). Art UK’s next photography digitisation project, subject to funding, will be to record outdoor murals across the UK.

An Artist Built a Mock Sweetgreen Salad Shop in New York’s Chinatown. It Made a Lot of People Surprisingly Irate