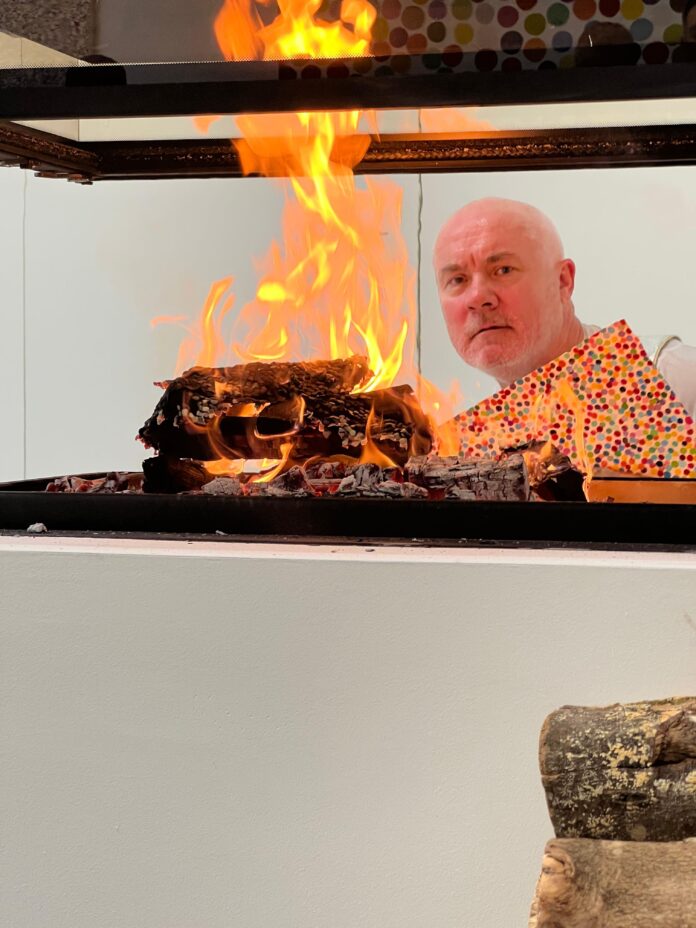 In a ritualistic ceremony at his Newport Street Gallery, today Damien Hirst began incinerating 1,000 of his own works from his first NFT (non-fungible token) collection. “What a weird day,” commented the artist, dressed in silver protective trousers and matching gloves, as he put the first piece, appropriately titled Totally Gonna Sell You into one of six custom-designed sculptural wood-burning fireplaces at his gallery.

This marks the final phase of Hirst’s NFT project The Currency, which he launched in July 2021 with a collection of 10,000 dot paintings, each titled, numbered, signed, linked to corresponding NFTs and priced at $2,000. Buyers could then choose to get the physical work—or have the analogue painting destroyed. The exchange period closed in July this year with an almost even split of 5,149 buyers deciding to keep the physical artwork and 4,851 opting to take the NFT.

All the paintings passed over for NFTs have been on show at Newport Street since 6 September including the 1,000 that Hirst bought for himself. The remaining works will be burnt in batches each day until the show closes on 30 October. The decision by Hirst to put all of his own works to the flame confirms his ultimate support for the NFT over the physical art work option, despite earlier agonising on Twitter that he was “all over the f*****g shop” trying to choose between the two. Perhaps the decision owes something to The Currency project being backed by the technology company Heni.

“The idea is worse than the reality—I’m actually enjoying it more than I thought,” Hirst admitted after he had put a few more works to the flame, but in each case carefully making sure each number and title was filmed first. “It’s a bit like the reverse of signing,” he added.

And what of the environmental impact of this ongoing bonfire of the vanities? Despite the smell of woodsmoke permeating the galleries, The Art Newspaper was told by a representative of Hirst’s trading company, Science Ltd, that the log-burning stoves are “virtually smokeless”. All the fuel comes from renewable sources, the stoves are Defra compliant and a filter has been installed to catch 90% of the particles. And those who have taken the blockchain option can also bask in a green glow with the NFTs minted on the Palm platform that claims to “have a near zero carbon footprint”.