Home News One of India’s Richest Women Is Opening a Splashy New Center for... 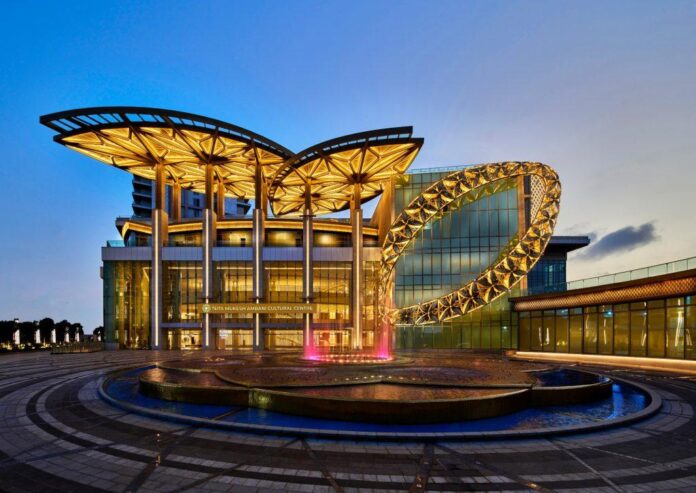 A first-of-its-kind cultural landmark in India, the Nita Mukesh Ambani Cultural Centre (NMACC) will open next March in Mumbai.

The center has been described as the “crown jewel” of the Jio World Centre in Mumbai, a vast cultural and business complex that includes two convention halls, three exhibition halls, 25 meeting rooms, and a 32,280-square-foot ballroom.

This mammoth 18.5-acre facility, which is being inaugurated in stages, is the vision of philanthropist Nita Ambani, the wife of Indian billionaire businessman Mukesh Ambani, who is on the board of the Metropolitan Museum in New York. She has described it as “a tribute to our glorious nation and a reflection of the aspirations of New India.”

The NMACC is the venture’s main cultural arm, and is set to house major exhibitions of art and fashion at The Art House. Large-scale musical performances will take place in the Grand Theatre, which can accommodate more than 700 performers and up to 2,000 guests, while more intimate or experimental productions will be staged in a smaller venue.

The opening program gives an enticing glimpse of what’s in store. American gallerist Jeffrey Deitch is teaming up with India cultural theorist Ranjit Hoskote to curate “Sangram Confluence,” a showcase of Indian contemporary artists side by side with Western artists that count India as one of their influences.

“India in Fashion” examines the reach of Indian style influences on global fashion, including examples by Dior, Saint Laurent, and Valentino, under the curation of editor Hamish Bowles.

The Ambani fortune comes from Reliance Industries Limited, which Muresh Ambani helped his father build during the 1980s. It is the country’s largest private sector company with activities that span petroleum refining and marketing, hydrocarbon exploration and production, petrochemicals, renewable energy, retail and digital services.

Announcing the new centre’s opening date, Nita Ambani’s daughter Isha said that her mother’s “vision for NMACC is to showcase the best of what India has to offer to the world and bring the world to India.”

‘It’s All About the Materiality’: Watch Jack Whitten Experiment With the Physicality of Paint in His Abstract Artworks