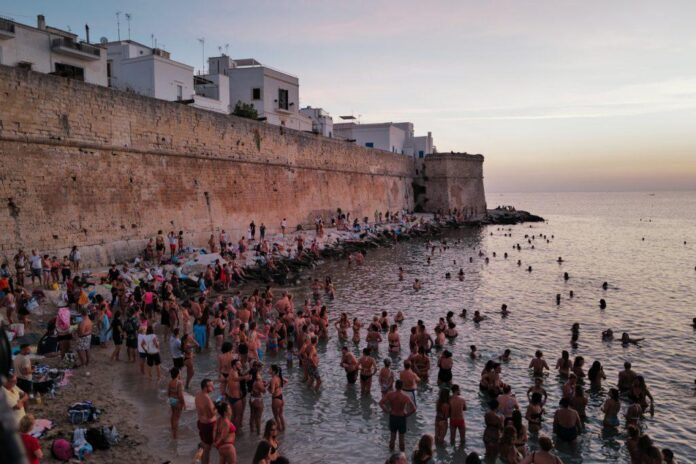 There is a centuries-old tradition in the ancient port town of Monopoli, on Puglia’s Adriatic coast: every September 1, locals gather at dawn at Cala di Porta Vecchia to bathe in the sea, in a bid for a winter of good health. No one really knows the source of the tradition, but I was sold from the moment I heard about it. This year, the collective swim was captured by Massimo Vitali, the Italian photographer famed for his astute portrayals of Italian beaches, and it kick-started the second edition of Panorama Monopol, a four-day, roving Italian pop-up exhibition.

On view now through September 4, Panorama is organized by Italics, a consortium of Italian galleries that was born out of conversations between Galleria Continua cofounder Lorenzo Fiaschi and Pepi Marchetti Franchi, director of Gagosian Rome, during what was Europe’s strictest lockdown period in March 2020. 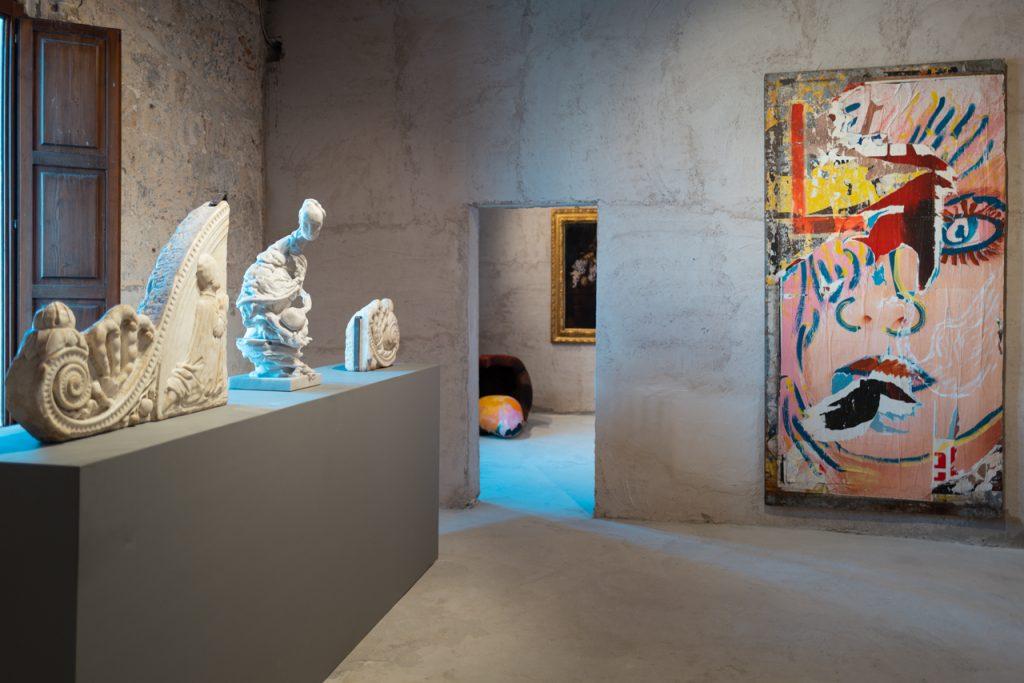 “Both Lorenzo and I were shocked how Italy had come to be seen, almost overnight, as the gateway to the virus,” Marchetti Franchi told Artnet News. Wanting to revive Italy’s perception in the art world became a catalyst for Italics, which was first launched as an online platform that featured cultural and architectural tips by the country’s leading gallerists. It was also the first consortium of its kind in the country.

“The idea was to offer a panorama of Italy outside of the usual clichés,” said Fiaschi. When restrictions eased, creating an exhibition outside Italy’s typical cultural circuits (Florence, Venice, and the like) was a natural step for the dealers. “It made sense to move this project into something itinerant through which we would discover Italy, its lesser-known locations and traditions,” added Franchi.

The inaugural edition, hosted last year on the island of Procida in the Gulf of Naples, was a successful pilot—no small feat, considering it had a three-month runway. It received glowing coverage in national and local presses, and its success certainly played a part in helping Italics secure UNESCO patronage for this year’s edition in Monopoli. “This was an incredible historic moment, because in Italy there is always this attitude that galleries are a bit like unpleasant marketplaces which sell art. All the work that galleries do—tirelessly supporting, researching, and promoting their artists—is too often unrecognized,” said Fiaschi. “UNESCO’s support shows how galleries have a fundamental role in the valorization of our cultural heritage.”

Fiaschi and Marchetti are quick to point out that Panorama is not a commercial event: the artworks may be sold at a later stage, of course, just like with biennales, and it certainly helps bring visibility to the galleries and their artists. The exhibition and its talks program is free, the overall purpose being to bring art to the streets, so that anyone may stumble upon it. An apt example is Gaia Di Lorenzo’s Temmatemenetè (2021), a series of large bronze-tinted aluminum curtains recalling traditional fly screens, which are installed at various heights on the windows and doorways of a chiasso, or small courtyard. They are held up by wooden walnut beams etched with phrases deriving from traditional Apulian songs typically sung by women. In the afternoons, a series of participatory performances take place in various locations in town, including Adelita Husni-Bey’s intimate explorations of injuries, Enounters on Pain (2018–ongoing), in Piazza Garibaldi; Eugenio Tibaldi’s informal poker session Cuba Casinò (2016) will take place in the cloister of the Monastery of San Martino. 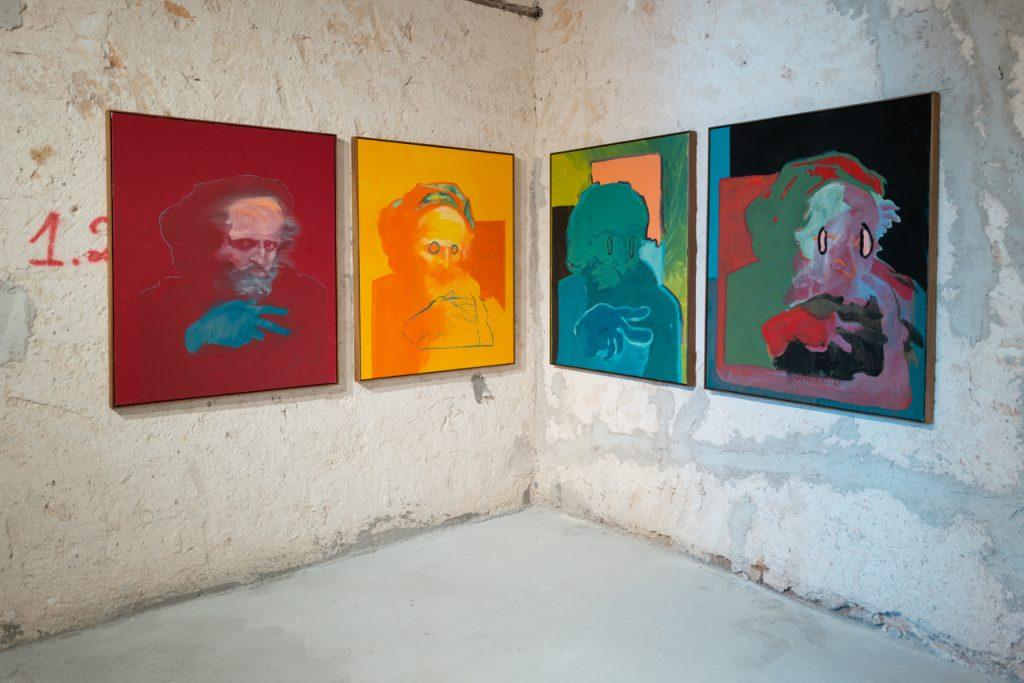 Gianni Politi Enter the Wolf King, My God is the Sun (after W.T.), Noble Attitude (Pittura), The Wolf King in the Moment of His Ascension (2019). Courtesy the artist and Galleria Lorcan O’Neill. Photo © Piero Percoco and Mirko Ostuni. Courtesy Italics, the galleries, the artists.

The central curatorial theme is underpinned (very broadly) by the ancient Greek concept of xenia, or hospitality and our relationship with foreigners. It resonates with Monopoli’s own melting-pot history as an Adriatic port town at the crossroads of numerous empires and peoples, from the Byzantines to the Arabs, Ottomans, Spaniards, and Venetians. “Monopoli is one of the eastern-most places in continental Italy and looks to that part of the world even now,” De Bellis said, noting how the region took in Albanian neighbors as the Soviet Union unraveled. While De Bellis didn’t want to make an overtly political show, the sentiment of welcoming foreigners with humanity is undeniably loaded—with Italy’s elections around the corner and the far right party poised to take power on a campaign fueled by nationalism and closed borders. 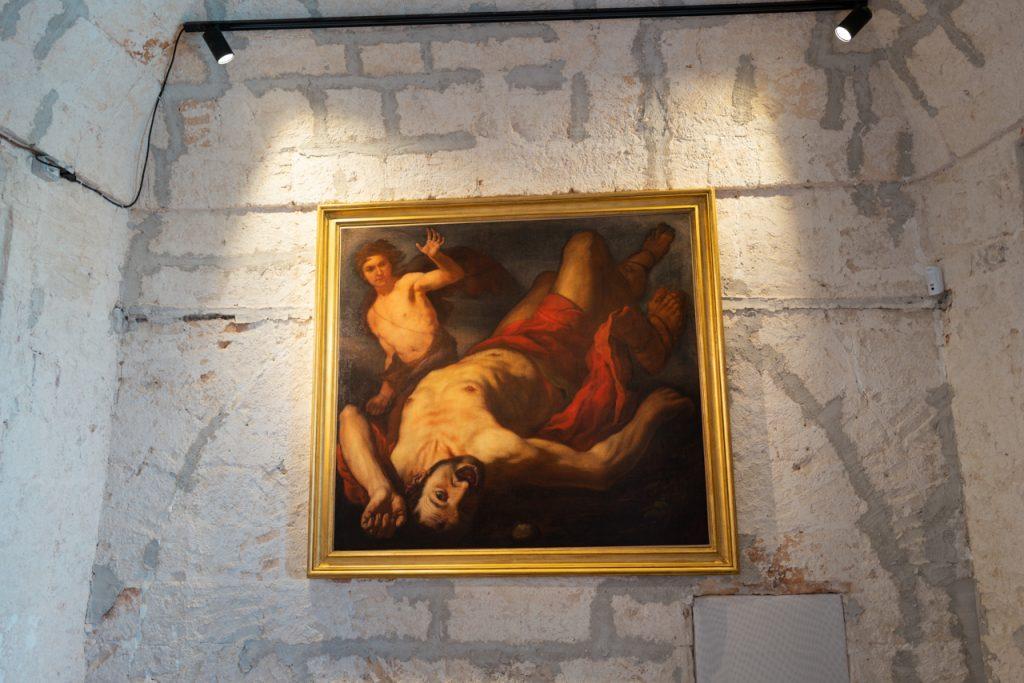 Some of the most poignant pieces which explore these themes are Edi Hila’s moving triptych People of the Future (1997), painted after dozens of Albanian migrants drowned off the coasts of Italy in 1997, as well as Massimo Vitali’s photograph Masso Delle Fanciulle Swimmer (2017), which features a group of Sub-Saharan young men, who are awaiting residency permits, swimming in a natural swimming pool of the Cecina river in Tuscany. The sea, both as a symbol of freedom and danger, is omnipresent, with numerous works referencing its powers of creation and destruction, like Matteo Fato in his site specific work senza tempeste, senza naufragio e senza alcun merito nostro (2022).

Aside from injecting contemporary art into public space, Panorama also strives to provide access to impressive historic buildings that have been closed for decades, central to the spirit of Italics. “We collaborate with local institutions and local authorities to open up specific places that are not usually seen, so that even for a local audience this turns into an opportunity to learn more about their own place,” said Franchi. This taps into a broader pressing issue of how to maintain Italy’s numerous cultural heritage sites, many of which are in a state of disrepair. “Some of the indoor locations we have chosen have been shut for 30 years and are just destroyed inside. What do we do with these sites? It’s an important conversation,” said De Bellis. 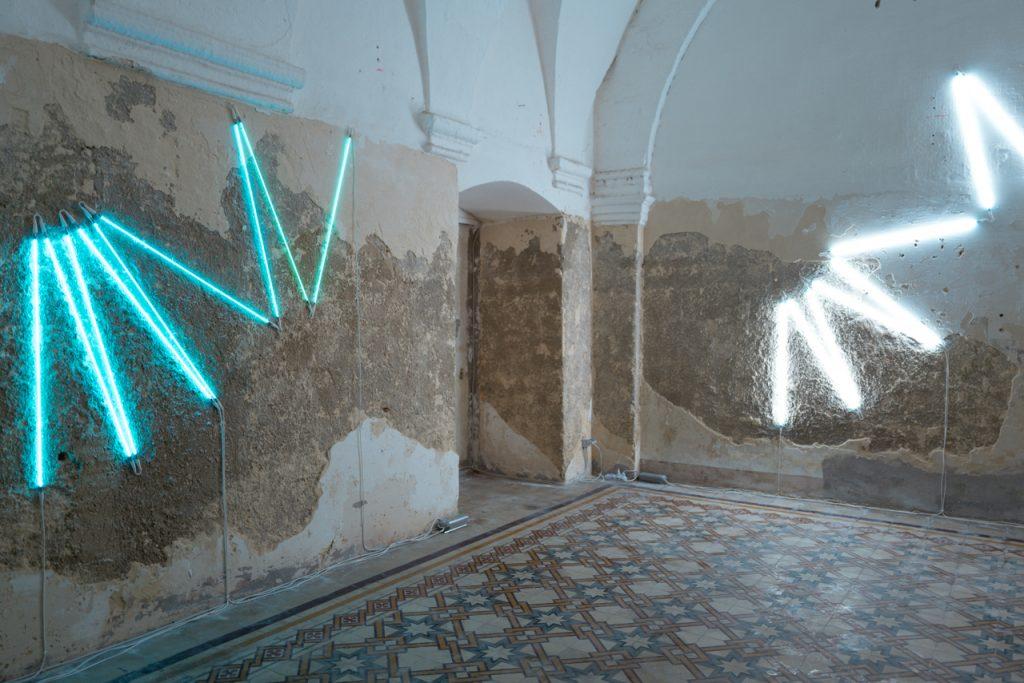 Palazzo Martinelli is a case in point: an iconic port building with a façade laden with Venetian windows and balconies whose interior has been completely destroyed save for its painted ceilings. Here, the standout interventions include Simon Falls’s Not titled yet (2022), a delicate series of works on canvas in which the pigments have dissolved following exposure to rain and humidity, and Giangiacomo Rossetti’s disquieting portrait Tutti i crocicchi del cielo sarebbero affollati di nostre controfigure (2021). Similarly, the town’s San Leonardo complex has been boarded up for three decades, and parts of its walls still bear visible traces of vegetation and moss. Here, Runo Lagomarsino’s mesmerizing video Europa Point (2019) features a slowly burning postcard of the Strait of Gibraltar, a historic symbol of the world’s borders.

Out by the sea, the Monopoli Castle is a 16th-century fortress erected on a promontory, complete with rusty cannons and anchors. It hosts some impressive historical pieces, including Marisa Merz’s stunning Untitled (undated), featuring a delicately sketched face of a woman with cerulean eyes surrounded by a metallic gold halo. Its fiery spirit seems to challenge the demure Madonna, lying opposite Lorenzo Lippi’s painting Madonna con il Bambino e San Giovannino (1606–65).

“Monopoli is a gem on the water dotted with palaces and churches,” said Franchetti. “It’s our hope that this experience will open up the richness of the area.”