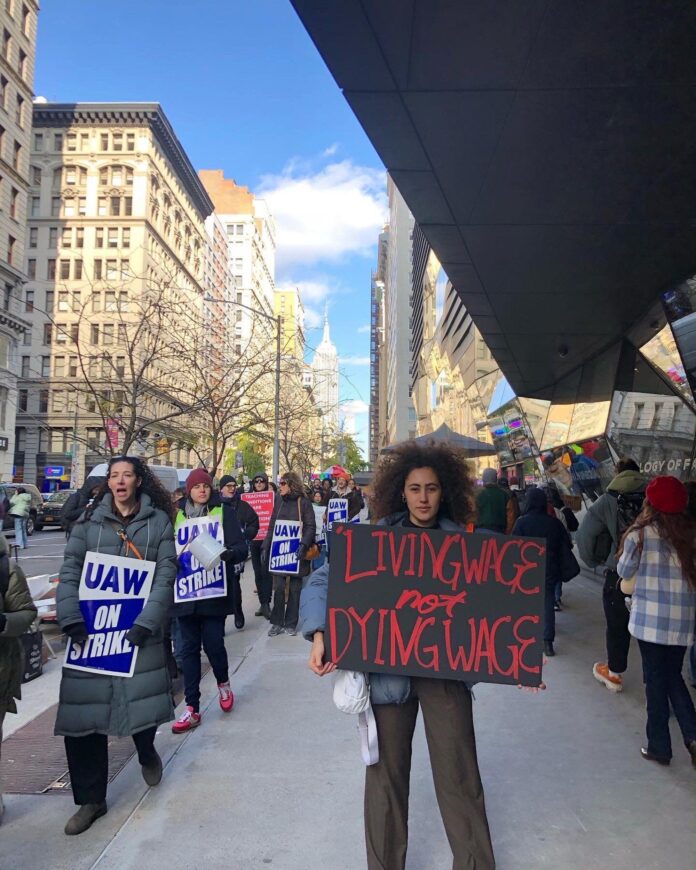 Part-time faculty at the New School in New York have been on strike and picketing outside the university’s buildings in Greenwich Village since 16 November, following the expiration of their previous contract.

The union representing the striking part-time faculty is part of ACT-UAW (United Auto Workers) Local 7902, which also represents faculty at New York University (NYU), issued a statement in which it notes the strike will continue until a contract is reached that offers “meaningful wage increases, no cuts to healthcare and third-party protection from harassment and discrimination”. The union represents some 1,300 active adjunct professors at the university, who account for more than 80% of the school’s entire teaching faculty.

The New School’s part-time faculty union formed in 2005 and last underwent a negotiation in 2014. That contract was due to expire in 2019 but, due the circumstances surrounding the Covid-19 pandemic, it was extended. Part-time faculty at the university have not received a raise in four years and are currently asking for a 10% increase. The union rejected a 3.5% increase offered by the university.

“We would like to end the strike as soon as possible, but a lot of that depends on how the university responds,” educator and designer Lee-Sean Huang, a bargaining committee member and part-time faculty member at the Parsons School of Design, tells The Art Newspaper. “Will they come back to the table? Or will they continue to strong-arm us with their forced ‘last, final, best’ offer and rush us into accepting a bad deal? We are committed to an open, democratic process with our members. Good deals take time, and we will not be rushed. Staying on strike is an option. It is our leverage.”

On Monday, the New School administration released a school-wide statement in which it addressed the strike and noted the administration had presented “a comprehensive offer for a full contract, which includes an average increase of 20% in total compensation, including a one-time bonus in year one of the contract for all part-time faculty in academic year 2022-2023. This offer is responsive to each of the priorities identified by the union, and we urged union leadership to present the offer to part-time faculty for review and ratification.”

The latest proposal, the administration wrote to students, also included a “7% wage increase for all part-time faculty in the first year of the contract, in addition to a $2,100 pandemic bonus—totaling a 20% average increase in total compensation in academic year 2022-2023 upon ratification of the contract”.

“Part-time faculty play a vitally important role in the New School community, and we look forward to reaching a fair and equitable agreement that works for everyone,” a representative for the New School said in a statement. “We deeply respect our part-time faculty and remain committed to a renewal agreement that provides competitive compensation, exceptional benefits and protected time off.”

The school gave the union until noon on 22 November to respond to the proposal. Officials at the New School and union representatives met today to discuss the university’s most recent offer, which administrators had said is their “best, final and last offer”. The union will put the proposed contract to its members for a vote, though it is not expected to pass as the administration and union remain far apart in their negotiations.

The union is asking for raises, affordable and more accessible healthcare benefits, increased job security and recourse to outside support in harassment and discrimtation claims, as well as more input when it comes to department affairs, programmes and curricula.

Haung described it this way, “Our members have not received a raise since 2018. Cumulative inflation is up to 18% since then. The university’s latest offer of a 7% raise is still a net decrease in real income. We also want acknowledgement and compensation for unpaid labor. We only get paid for contact hours that we spend in class with all our students. Course prep, grading, mentoring, etc. are not covered. NYU and CUNY adjuncts have recently won compensation for some of this time.”

The strike at the New School, whose highly-ranked art programme employs many contemporary artists, comes as part-time faculty, researchers and graduate student workers increasingly seek to safeguard their benefits and improve their workplaces. On the other side of the country, thousands of workers at the University of California who are also members of the UAW went on strike.

Faculty at NYU whose contract also expired earlier in the month had voted to strike as well if they could not reach an agreement with the school’s administration. However, they were able to strike a deal.