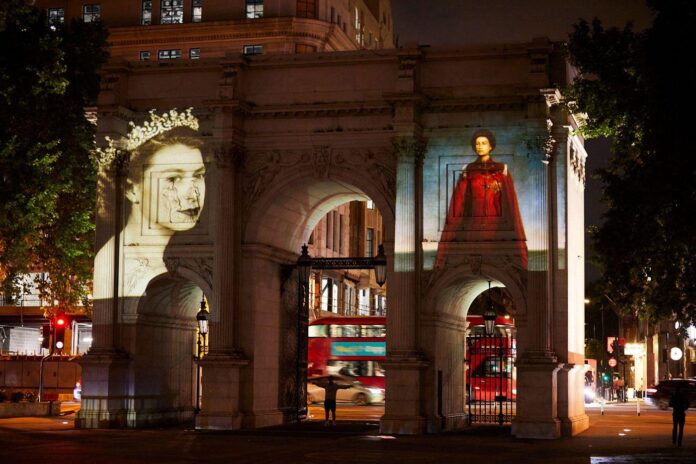 Astonishingly, in 1967 the National Portrait Gallery (NPG), in London, had no portrait of Queen Elizabeth II. Roy Strong, director of the NPG, initially favoured a group picture of the Queen and her family, a successor to James Gunn’s Conversation Piece at the Royal Lodge, Windsor, 1950, in the NPG collection. On 2 August 1967, Strong wrote to Lawrence Gowing, deputy director of the Tate Gallery and a trustee of the NPG, seeking advice: “I have had a conversation with Sir Martin Charteris concerning the possibility of the gallery having a new conversation group of the Royal Family painted. It must be somebody pleasant for the Royal Family to sit to and at the same time someone who will produce a painting acceptable to the gallery and not involve us being denounced as a retrograde institution.”

Gowing scorned the idea, suggesting there was no need for the Queen and her family to be represented in the NPG. As he explained: “The domestic arrangements of the Royal Family are steadily decreasing in public importance and the only excuse for representing them again would be if we got a really remarkable picture. That, for the moment, I do not see how we are to do. The very few good painters who are capable of it will not do it and the great painter who might is surely unacceptable to the Royal Family.” One wonders whom Gowing had in mind as the “great painter” (possibly Lucian Freud?).

Strong then managed to secure an invitation for lunch at Buckingham Palace, encouraged by the NPG chairman, Lord Kenyon. In his diary he recorded his discussion with the Queen on 28 November: “I tackled her about a new royal family group for the Portrait Gallery. She denounced the James Gunn and also went on to say that she wouldn’t allow a portrait, which has just been finished, to go to Scotland as it was too awful. Another made her into a midget. Annigoni was the only artist whose name passed her lips. Do I tackle the possibility of her sitting to Annigoni again?” Pietro Annigoni had made his mark with his celebrated portrait of the Queen commissioned by the Worshipful Company of Fishmongers in 1954, and this quickly became a popular icon.

Strong’s other problem was money, and he decided to approach a fellow guest at the Buckingham Palace lunch, the millionaire Max Rayne. He wrote to Rayne, but two days later received a dismissive reply from the businessman: “While I sympathise with your natural desire to have a portrait of Her Majesty for your Gallery, I must confess that I find it difficult to summon any enthusiasm for the idea of another work by Annigoni—this with due respect to the comment you mention the Queen having made.”

Strong obviously also felt some ambivalence about Annigoni: “You have really pinpointed our problem admirably in that we have not been able to light on anybody who would be able to do a good portrait of the Queen. Annigoni has produced the only acceptable image of her within the terms he works in.”

At the meeting of the NPG trustees on 14 December 1967 Strong finally sought formal approval to approach Annigoni. The minutes record: “The Director reported that he had been tackling various avenues of approach for a new portrait of The Queen. The Queen herself was not in favour of a family group, but would conceivably sit for Annigoni again. The Trustees agreed that Annigoni should be approached. The Director would make every effort to secure a private donor for the portrait.”

Strong had already drafted the request to Annigoni, although the letter was not actually sent until 2 January 1968. Writing to the artist at his studio in Florence, he explained: “I am approaching you in confidence about the possibility that you would be interested in painting a second portrait of the Queen for this gallery. It would of course be a very important commission for it would be the most widely accessible and known representation of Her Majesty in Britain… Inevitably we would need to know how much you would charge for such a portrait commission. I need hardly stress the importance to us of secrecy about these proposals for the time being until we have obtained the approval of Her Majesty to sit for the picture and we have raised the money.”

Annigoni agreed, asking for £2,000, the same fee he had charged the Fishmongers’ Company. Strong found a donor, Hugh Leggatt of the dealer Leggatt Brothers. The Queen eventually gave no fewer than eighteen sittings to Annigoni, who later explained: “I saw her as monarch, alone in the problems of her responsibility.” When the portrait was finally finished in 1970 it was greeted with a very mixed reception. And what did the Queen think? At the unveiling, she simply remarked: “It looks very different with a frame.” Strong himself became reconciled to the choice of Annigoni, describing the portrait as “stunning, hugely grand and majestic.”

The first mega-gallery for design? Inside Carpenters Workshop’s ambitious expansion