Home News After Their Art Was Stolen on Campus, Yale MFA Students Demand That... 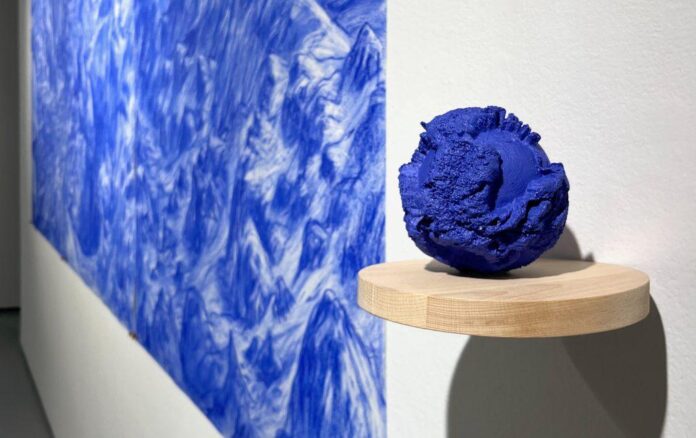 Yale School of Art students are calling on the university to update its policies after thieves made off with two sculptures by MFA candidates from an exhibition on campus. The current student handbook states that students must safe-guard their personal property, which means the university bares no responsibility for damaged or stolen art.

“The work that we as students and professionals produce is the wealth that these programs rely on, like that with any academy. For that to not be protected is nonsense,” Y. Malik Jalal, one of two artists whose work was stolen in the incident, told Hyperallergic.

The university’s official policy states that “Yale does not cover theft or damage to personal property for any reason,” and that “students are responsible for the safety and security of their belongings.”

The thief targeted two small, freestanding sculptures on view in “Blanket Statement: 1st-Year MFA Fall Exhibition” at Yale’s Green Hall Gallery:  by Jalal, an abstract stainless steel sculpture displayed on a small rectangle of red carpeting from a Chevrolet vehicle, and a small 3-D printed blue globe from , an installation by Rafael Villares. 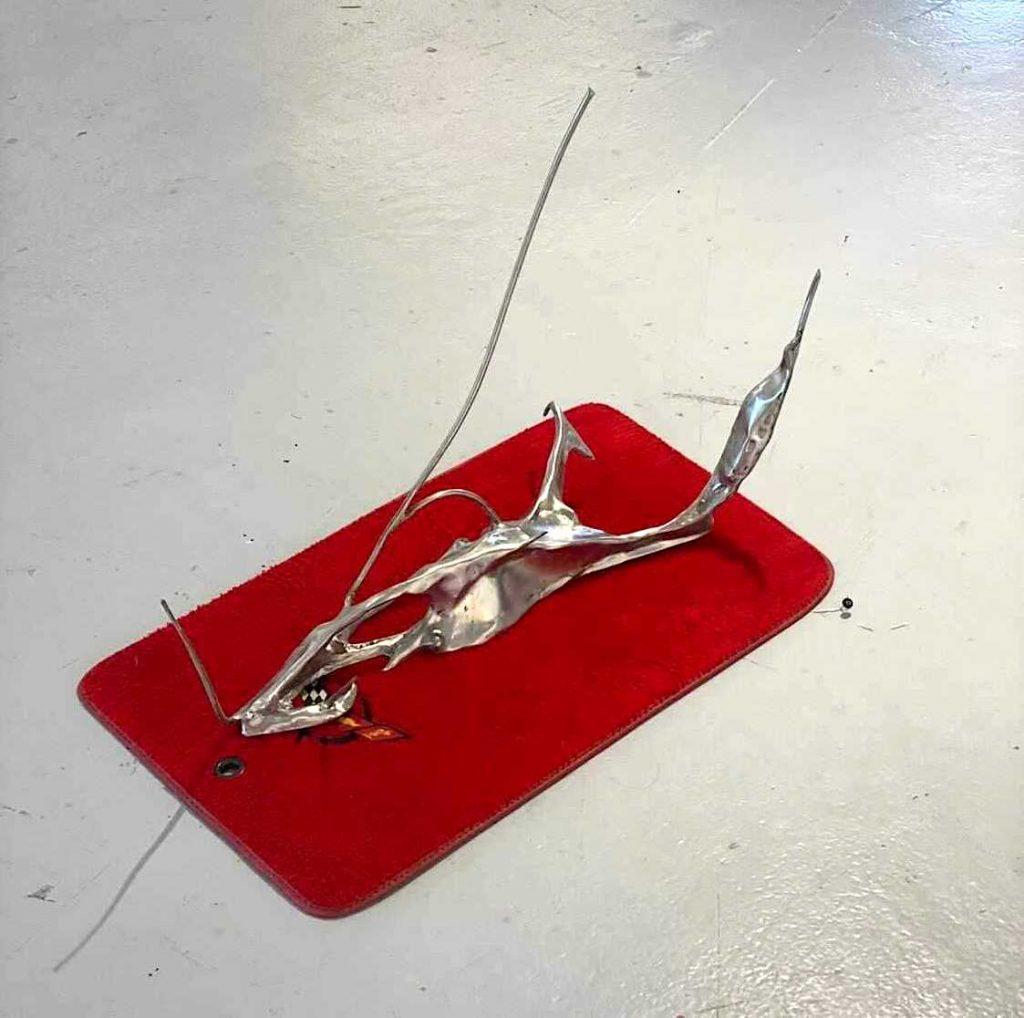 Both students are part of Yale’s 2024 MFA class. Villares is currently featured in the Cuban pavilion at the Venice Biennale, as part of a group exhibition “Terra Ignota, (proposals for a New World),” curated by Nelson Ramirez de Arellano Conde.

“We are all disheartened and disappointed that someone with access to this building, which is limited to the Yale community, could have treated Yale artists in such a way,” School of Art dean Kymberly Pinder wrote in an email to students and faculty following the incident. “The galleries are educational spaces that are open to provide access and conversation among the community.”

Based on photographs of the show taken at 9:30 p.m. on the evening of November 9, in which both works are visible, the robbery took place sometime before 10:30 a.m. the following morning, when Villares’s wife noticed that the sphere was missing. The exhibition closed on November 11.

Villares and Jalal reported the stolen art to campus police, who are investigating but have not identified a suspect.

“We’ve pretty much accepted that work is lost for good,” Jalal told Artnet News in an Instagram message. “Rafael and I hope more than anything that moving forward students won’t fear that what happened to us could happen to them.” 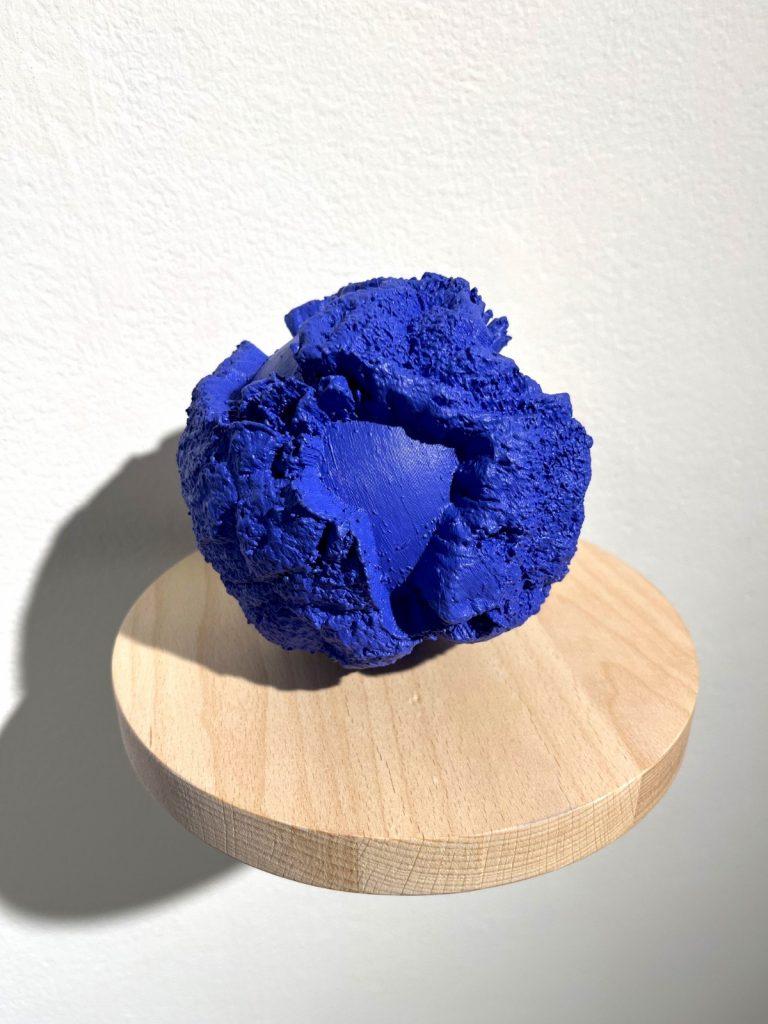 Rafael Villares, , 2022 (detail). A thief stole this blue sphere from an exhibition of MFA student work at the Yale School of Art. Photo courtesy of Rafael Villares.

“This unprecedented theft has shaken students and faculty and caused widespread concern over the security of artistic creations. Yale police department’s investigation is ongoing and we are hopeful that the missing sculptures are recovered,” a representative for the college told Artnet News in an email.

There are security cameras in the hallways of the building, but none inside the gallery space, and there is not a gallery attendant tasked with monitoring the exhibition—something MFA students hope will change moving forward, to better protect their work from future incidents.

In response to the theft, the school plans to reduce gallery hours and limit access to the space. Previously, the gallery remained unlocked at all times, allowing anyone with a valid Yale ID to enter. The next exhibition, featuring work by undergraduate students, is scheduled to open November 28.

“The School of Art’s student handbook outlines all policies regarding personal property and insurance,” the college representative said. “It is given to each MFA student, who is required to sign a form stating they have reviewed all of the information prior to receiving studio keys. These policies are reiterated in other shared information and are in line with those of other art schools.” 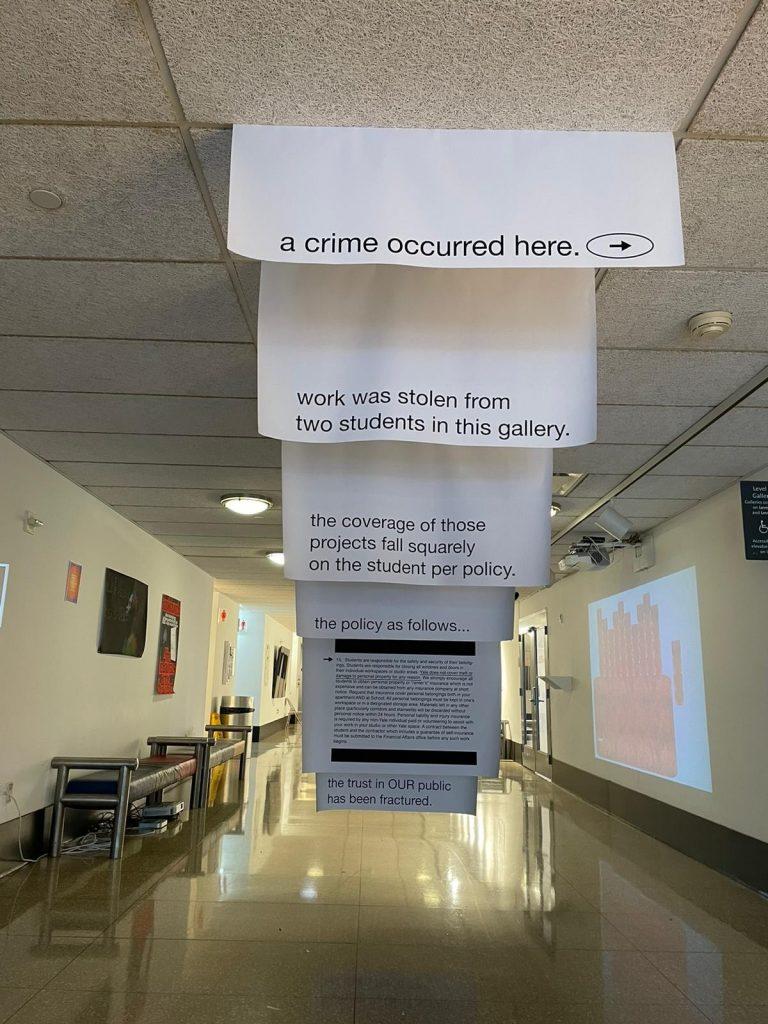 One MFA student, David Jon Walker, took it upon himself to warn his classmates that Yale will not protect their works, hanging a series of signs just inside the School of Art entrance.

The first sign noted that “a crime occurred” here, with additional signs noting that the school will not cover losses incurred due to theft, and stating the relevant university policy. The last sign states that “the trust in OUR public has been fractured.”

Initially, administrators told Villares and Jalal to refer to the handbook policy noting that Yale bore no responsibility for any thefts. But when other MFA students object to this response, the school reportedly offered to provide compensation for the artists’ materials costs—a solution the artists don’t find satisfying.

“The actual things we purchased to make the work don’t even remotely reflect what the value of the work is,” Jalal told the . “There’s a great deal of labor put directly into both of those objects. Their value is not determined by material expenses.”

As They Arrive in New York, the Dealers Behind Sprüth Magers Discuss How a Gallery Can Have a ‘Cultural Footprint’

What I Buy and Why: Design Collector and Fair Director Jill Bokor on the Danger of Buying a Chair That You Can’t Actually Sit...

‘Tis the Season to Sparkle: New York Auction Houses Roll Out Their Finest Jewels for the Holidays