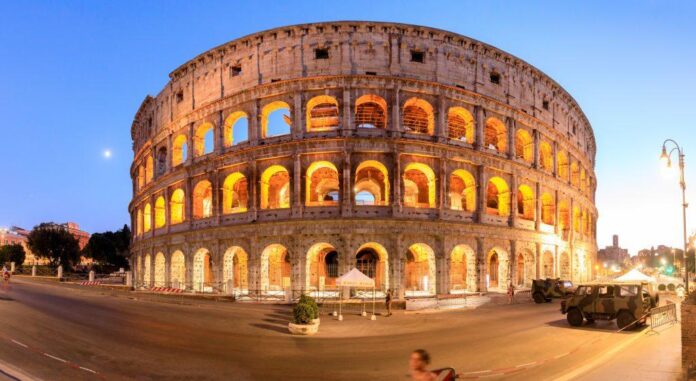 In the latest news that will all but convince you the end is nigh, there’s a TikTok influencer out there trying to convince the interwebs that the ancient Roman civilization never existed, and is actually a hoax concocted by the Catholic church in the 1500s and maintained by white supremacists.

The bizarre—and let’s be clear, completely groundless—conspiracy theory comes to us courtesy of a TikTok user @momllennial_returns, and whose real name, as per her Twitter profile, is Donna Dickens. She first posted a video on the subject in November 2021, but her hypothesis is back in a bigger way a year later, to the consternation of classicists, archaeologists, and, you know, generally educated people.

This year’s version of Dickens’s “fake Rome” video has a mere 9,300 views on her original TikTok, but a copy she shared on on Twitter has taken off, with nearly 75,000 people having watched it.

Dickens has claimed that ancient Roman culture as taught by historians is actually a mix of elements from ancient Greece, Turkey, Asia, and Egypt. Dickens said Roman monuments like the Colosseum can’t be considered proof since stone can’t be radiocarbon dated.

And all those historical text from the Roman period? There are no extant originals, so clearly they were forged by monks, she insisted. (To set the record straight, there are 100 percent ancient manuscripts written in Latin that plainly and obviously debunk this falsehood.)

And on what credentials is Dickens staking these outlandish claims? She’s “a former entertainment journalist who double-majored in anthropology (specialized in archaeology) and history” before dropping out of college after her junior year, according to her blog, Fog of History.

Fortunately, plenty of real experts (and passionate YouTubers) have stepped into the fray to lay out the mountains of evidence that contradict Dickens.

Some have also raised questions that obviously punch holes in the idea that Rome could be a hoax.

“And peoples all across Europe (France to Romania) speak Latin-descended languages why?” asked one user. “What’s your position on birds? Real or not real?”

But as the events of the past three years have shown us all too well, internet-based conspiracy theories—no matter how absurd—can be a powerful force that can negatively impact our world. (And while we’re on the subject: No, 5G cellular networks did not cause the pandemic, and no, Democrats did not steal the 2020 U.S. presidential election.)

But while the lure of misinformation and fake news can send people looking to cope with the stresses of life in 2022 down potentially dangerous internet rabbit holes, it seems like Dickens’s “fake Rome” theory is catching on, not because it resonates as credible with people watching, but because it is so obviously insane.

It’s easy to mock the Ancient Rome Wasn’t Real/Ancient Aliens/Lost Ancient Civilization conspiracy theorists, but I’m deeply alarmed at how quickly disinformation about the past is being spread by people whose entire arguments essentially rest on a rejection of authority.

Though a few commenters seem intrigued by the (nonexistent) possibility that Dickens is on to something, most responses are mocking or discrediting her.

Her video is being spread “not necessarily by believers, but by other people watching it because it’s funny and interesting,”  author Joseph Uscinski, a political science researcher at Florida’s University of Miami, told the Daily Beast. “I guess if we wind up with a cadre of people on campus who are, like, ‘Rome truthers,’ I’ll be concerned.”

So, while the viral “Rome Is Fake” story is absolutely sinking to new depths of internet stupidity, it’s at least somewhat comforting that there are some conspiracy theories that are simply too ridiculous to worm their way into people’s belief systems—at least for now.