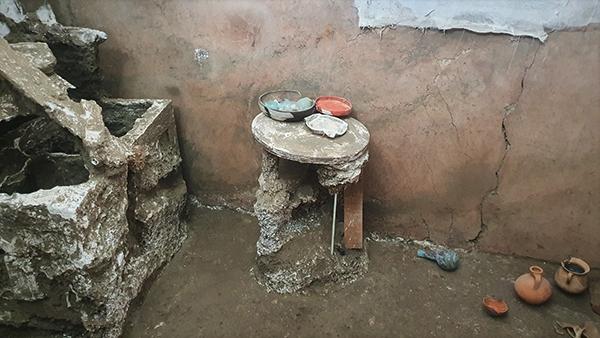 The ancient city of Pompeii continues to offer up new glimpses into what life was like in first-century Roman Empire. Archaeologists’ most recent excavations have uncovered what appears to be a middle-class home, with furnishings reflecting the desire for a higher social standing.

The centerpiece of the home is its luxurious —a shrine to the spirits believed to serve as guardians of the Roman household—in the courtyard, decorated with detailed murals of an enchanted garden. Archaeologists named the building the House of the Lararium after this lavish feature, but the rest of the structure seems to hold less ornate belongings.

“The owner was able to embellish the courtyard with the and the basin for the cistern with exceptional paintings, yet evidently funds were insufficient to decorate the five rooms of the house, one of which was used for storage,” Massimo Osanna, Italy’s director general of museums, said in a statement.

“We do not know who the inhabitants of the house were, but certainly the culture of (leisure) which inspired the wonderful decoration of the courtyard represented for them more a future they dreamed of than a lived reality,” he added. 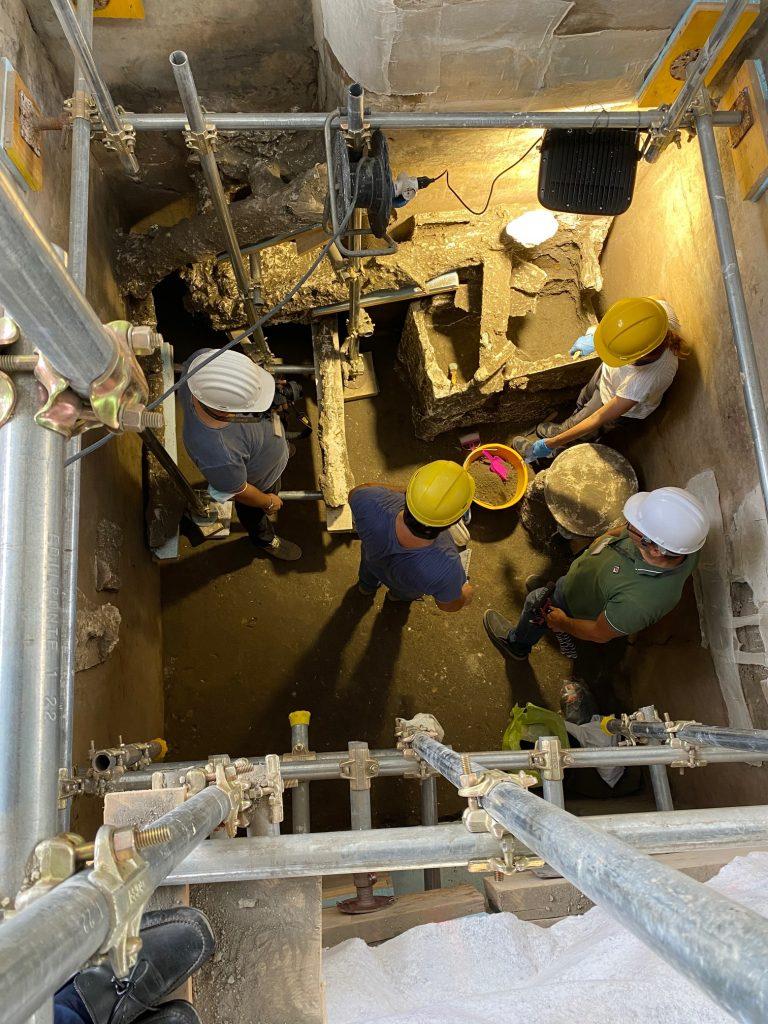 Excavations at the House of the Lararium in Pompeii. Photo courtesy of the Pompeii Archaeological Park.

Inside, archaeologists found a bedroom, and were able to make casts of the pillow and parts of the bed frame for the simple cot. The room’s ceiling had collapsed during the eruption of Mount Vesuvius, but a wooden chest containing a clay plate and a lantern, bearing a bas-relief sculpture of Zeus turning into an eagle, managed to survive, its lid left ajar, presumably as its owners fled the doomed city.

A ceramic cup and a pair of plates still resting on a three-footed table reflect the sudden nature of Pompeii’s destruction, freezing the every day lives of the city in the ashes for millennia. 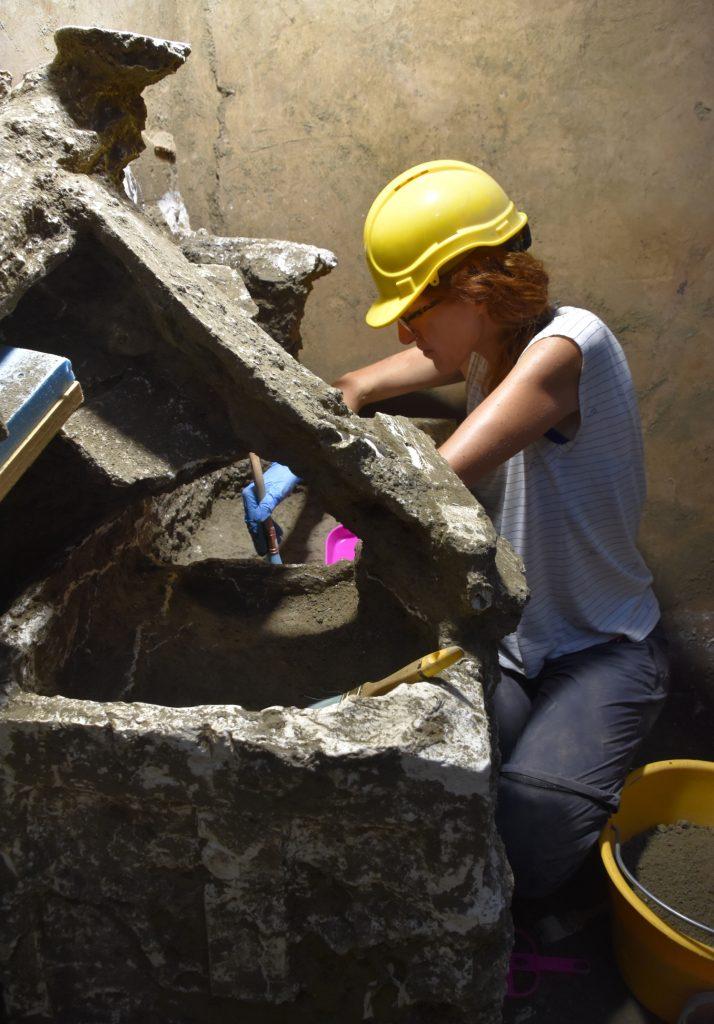 Excavations at the House of the Lararium in Pompeii. Photo courtesy of the Pompeii Archaeological Park.

The House of the Lararium’s storage room, meanwhile, had a plain earthen floor, and the walls were not plastered. It contain a shelf full of amphora and a pile of wooden planks tied up with cords.

Excavations of the home’s supper floor yielded a unique find in the form of seven waxed tablets. Archaeologists also unearthed well-preserved ceramic vessels, a painted incense burner, and a set of bronze vessels, including a jug with a lion’s head and a sphinx on the handle. 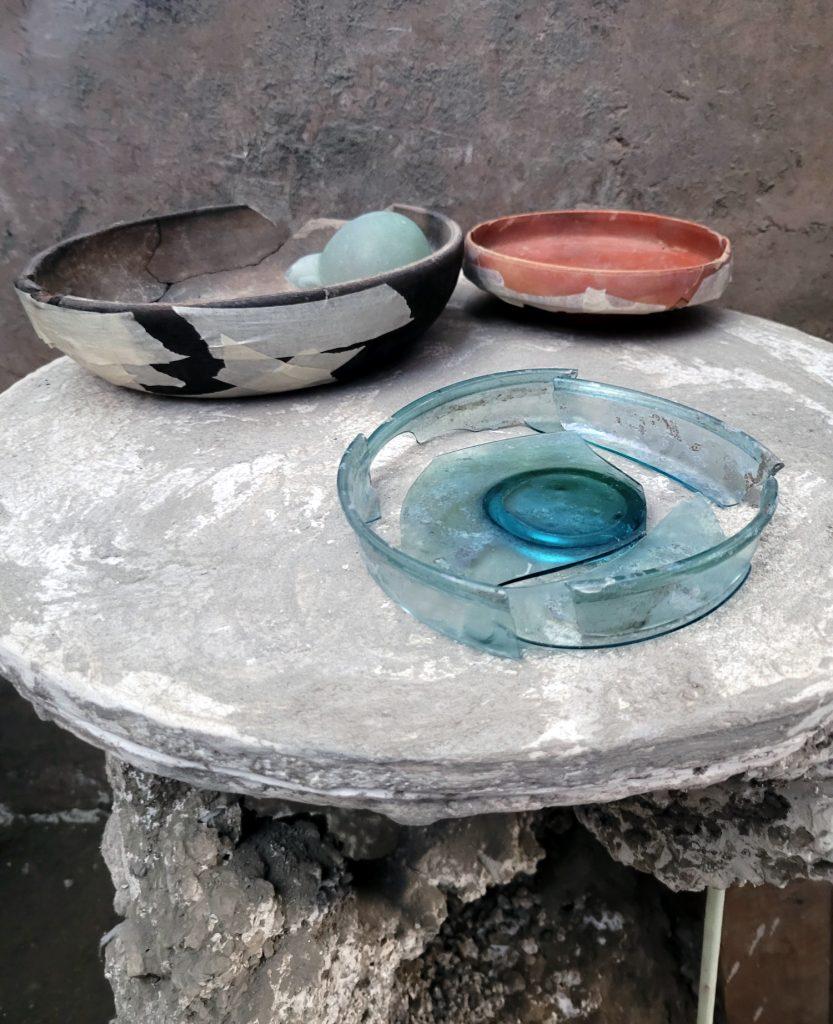 Excavated artifacts from the House of the Lararium in Pompeii. Photo courtesy of the Pompeii Archaeological Park.

Located in Pompeii’s Regio V section, the main site of active archaeological work at the complex, the home was first excavated in 2018.

Other recent discoveries from Regio V, which is not fully open to the public, include frescos of Leda and the swan and a gladiatorial battle, as well as an ancient “fast food” restaurant, or .

Artists created a portrait of a doctor-hero from wood

A Group of Eighth-Graders on a Field Trip Near Tel Aviv Stumbled Upon a 3,000-Year-Old Sacred Egyptian Amulet

The Chicago-based designer recently had an exhibition at the Art Center Highland Park, and is slated to represent the United States at the 2023 Venice Architecture Biennale.