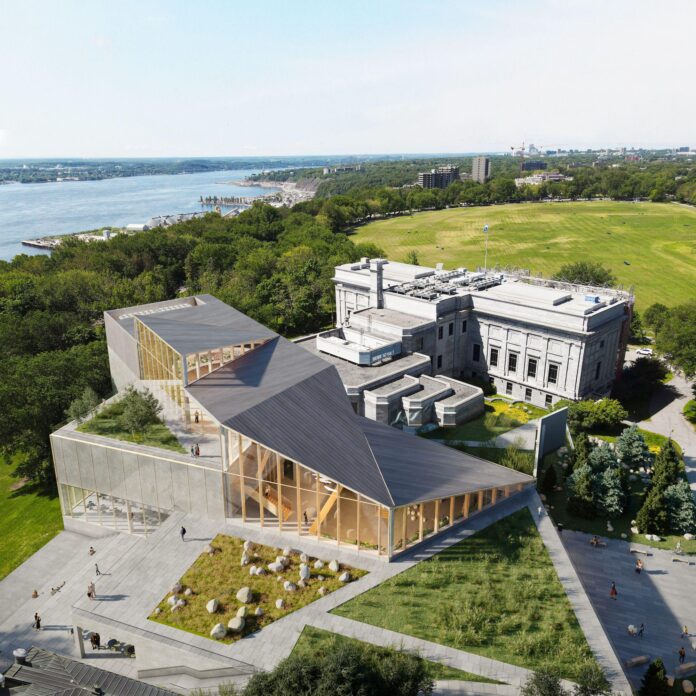 The Musée national des beaux-arts du Québec (MNBAQ) in Québec City is planning a C$42.5m ($32.6m) blowout to mark the 100th birthday of the province’s most famous modern artist, Jean-Paul Riopelle (1923-2002). Ahead of the renowned abstract painter and Refus Global manifesto co-author’s centennial next year, the museum has picked Montreal-based architecture firm Les Architectes FABG to design a luminous, terraced new pavilion to display its trove of Riopelle works, the largest public collection in the world. The Espace Riopelle pavilion is expected to open to the public in late 2025 or early 2026.

Les Architectes FABG’s winning design features a series of rising, geometric volumes with glass walls, leading visitors up toward a circular room that will hold Riopelle’s magnum opus, the 30-painting narrative fresco Hommage à Rosa Luxembourg (1992). The pavilion’s design was inspired, in part, by Riopelle’s light-filled studio. It will offer sweeping views of the St. Lawrence river, as well as the nearby Plains of Abraham, the site in 1759 of what is considered the decisive battle between the French and English for control of Canada. The firm’s previous cultural projects include the Musée d’art de Joliette and the renovation and expansion of the Auditorium de Verdun in Montreal.

The Espace Riopelle pavilion’s C$42.5m price tag will be covered through a mix of public and private funding. The Québec government is providing C$20m ($15.3m), as are the patrons of the Jean-Paul Riopelle Foundation, with the MNBAQ Foundation contributing C$2.5m ($1.9m). Over and above those contributions, the municipal government of Québec City is providing an additional C$2.5m toward the realisation of the room devoted to Hommage à Rosa Luxembourg.

The Espace Riopelle’s construction will require the temporary closure of the museum’s Gérard Morisset pavilion, home to its collection of historic art and temporary exhibitions. The museum’s most recent expansion, the Pierre Lassonde pavilion designed by Rem Koolhaas’s Rotterdam-based architectural firm OMA (Office for Metropolitan Architecture), was a C$103.4m project and opened in June 2016. The groundwork for the latest expansion was laid last December, when the Riopelle Foundation donated artworks valued at C$100m to the MNBAQ.

“I salute the strength of the architectural proposal, which is in line with Riopelle’s vision in terms of respect for nature and the environment,” Michael Audain, a major collector and the chair of the Riopelle Foundation’s board of directors, said in a statement. “As we will soon launch the artist’s centenary celebrations, we are delighted to take another important step today towards the realisation of our dream of creating a gathering place paying tribute to the impressive contribution of Riopelle to the history of art in Quebec, Canada and around the world.”

Espace Riopelle is not the only major project afoot to mark the artist’s 100th birthday next year. His widow Huguette Vachon recently revealed plans to build a C$4.3m ($3.3m) Musée-Atelier Riopelle on the Isle-aux-Grues, a tiny island in the St. Lawrence around 80km downriver from Québec City. The artist spent the last 15 years of his life living and working on the adjacent Île-aux-Oies. If realised, that project could be completed as soon as the summer of 2024.

Diverse, temporary monuments to pop up on the National Mall in Washington, DC, in new initiative