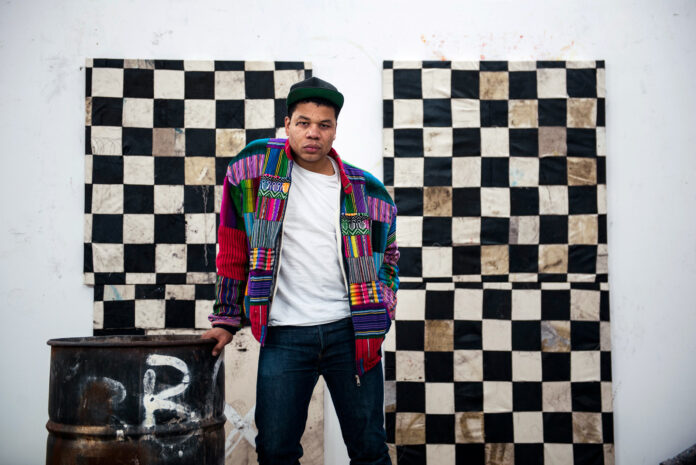 Oscar Murillo, a 26-year-old Colombian-born London artist, is one of the brightest young painters who is compared to Jean-Michel Basquiat.

Artist Oscar Murillo was born into a poor family in Colombia and spent his entire childhood there. He had little interest in art and spent most of his free time playing outdoors with friends. When Oscar was ten years old his family moved to London.

The capital of Great Britain seemed to the boy a boring, sterile city separating people, and he began to study art so as not to feel lonely and to be able to throw out his emotions. Artist Oscar Murillo entered the Royal College of Art. There, he studied painting.

But performance has always been an integral part of his work. Artist Oscar Murillo understands it as a collective action, as a kind of communication between people. Oscar Murillo’s paintings and performances are closely related: seemingly meaningless nouns in his paintings take on meaning when the viewer sees the performance associated with each work.

For example, one of his paintings has the word “yoga” written – in 2011, he staged a performance called Animals die from eating too much! Yoga at the London Hotel Gallery, during which girls practiced yoga on pieces of his painting. In the same year, he made a tablecloth out of one of his works – all visitors to the Carlos / Ishikawa Gallery, which represents Murillo, could eat, get acquainted, and communicate at the table covered with his painting.

In 2011, even before Murillo graduated from the Royal College of Art, his work was exhibited in several galleries in London. However, the next year, 2012, brought real success and international recognition to the young artist Oscar Murillo: his exhibitions were held in Paris, Berlin, and Miami.

In the same year, Murillo made his most famous performance, The Cleaners’ Late Summer Party, for the summer pavilion of the Serpentine Gallery in Hyde Park. He invited his family members and Colombian acquaintances to throw a “janitorial party” with karaoke and dancing.

In the 1990s, when artist Oscar Murillo moved to London, almost all of his relatives worked in cleaning companies, whose owners threw parties on special occasions. Murillo decided to reproduce one of them in the summer space of the famous gallery.

The resulting performance was one of the most striking works of Murillo, which shows his understanding of this genre as a “common cause” as an opportunity to provoke interaction between people.

In addition to a successful Oscar Murillo art performance in London, in 2012 the artist managed to make a series of huge paintings, which are now exhibited at the Rubell Family Collection in Miami. This is a contemporary art museum owned by the famous collectors Mere and Don Rubell. They have been collecting art since the mid-1960s, and their collection includes works by:

In the spring of 2012, the Rubells saw the work of the artist, Oscar Murillo, at the Independent fair in New York’s Chelsea and decided to invite the artist to an art residence in the Rubell Family Collection, although they had never given anyone such an opportunity before. Two huge halls of their museum were turned into a studio for the young author, and Murillo spent five weeks in Miami in the summer.

As a result, the young artist Oscar Murillo managed to make some huge works for the exhibition, which had opened at Art Basel Miami Beach in December 2012. It was the artist’s first and highly successful show in the United States, home of Abstract Expressionism, which is undoubtedly one of the main sources of inspiration for Murillo.

He would continue working in the United States – according to the artist, he would like to live in New York and explore the connection between the cultures of Colombia and America.

About art, ego, and Colombia

Critics equate Oscar Murillo’s artwork with Jean-Michel Basquiat’s work and call him one of the brightest contemporary painters. Oscar Murillo is a Colombian artist who addresses the topic of globalization and reflects the state of continuous change in the modern cultural environment, where ideas, languages ​​, and everyday objects are displaced from their usual places, circulating, and increasingly intertwined with each other.

Artist Oscar Murillo touches upon the problems of:

In his creative practice, he uses painting, performance, installation, sculpture, and sound. Many of Oscar Murillo’s paintings are based on recyclable materials or include non-artistic elements found in the studio.

Each Oscar Murillo artwork project of the artist, often created in several stages, combines material traces of various social situations that arise at the junction of socioeconomic, racial, and cultural phenomena. Murillo reveals their complexities and contradictions while insisting on the universality of human experience.

The artist’s auction history began in 2013 (between an exhibition at the Rubell Family Collection and the signing of a contract with David Zwirner). At the daytime auction of New York Sotheby’s, a small painting was sold at the upper limit of the estimate for $ 30.0 thousand.

In total, to date, Murillo has 146 sold lots, 58% of which have gone at a hammer price of over $ 100 thousand. At the same time, painting accounts for 92% of the artist’s sales in figures – $ 13.7 million. Oscar Murillo was also included in the rating of contemporary artists for whom ArtTactic respondents predicted a successful future in a ten-year perspective.