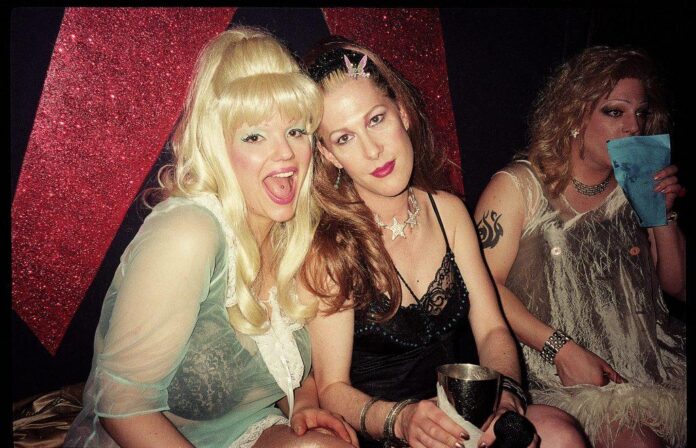 The door fee for Saturday night at the Cock was $5, and Irene never let in for free, but she took your money with a smile. It was a steep price to pay to get into an East Village gay bar in the late 1990s, but was worth it, even though the place—not much bigger than a two-bedroom apartment and painted pitch black—was a dump. “Here’s your Foxy Dollars, love,” she’d say, and hand you Xeroxed, Monopoly-style fake bills emblazoned with a cartoon fox in exchange for your hard currency. 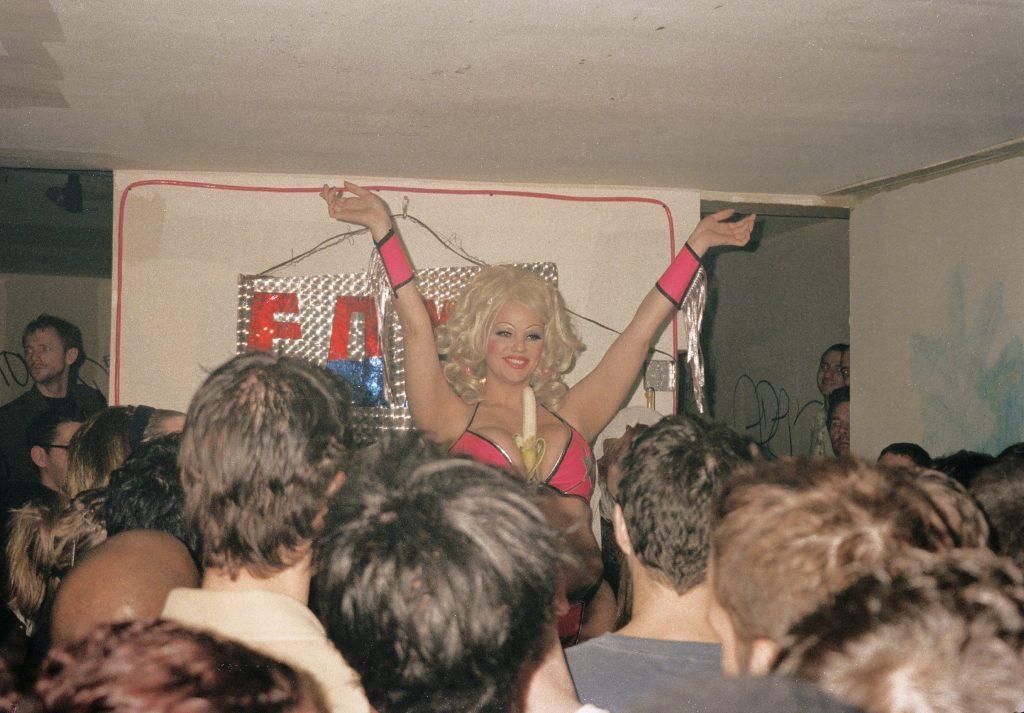 Unlike a traditional cabaret, the draw was the crowd itself. “We didn’t do lip sync or drag shows,” the multidisciplinary artist and singer Justin Vivian Bond recalled. Bond, who has since graced stages at Carnegie Hall and Brooklyn Academy of Music, was at the time merely a neighborhood legend, an entrancingly acerbic Foxy host and emcee. “We got everybody involved in performing.”

Volunteers scrambled to come onstage to take part in a depraved and silly exhibitionist talent contest. After all contestants had exposed themselves or peed in a cup or performed whatever absurd skill they had, the audience would vote for the winner (who’d receive $100) by handing in their Foxy bucks. Whenever Krylon Superstar participated, you knew there would be no competition. Once he donned an apron and staged a kitchen tableau complete with a red tablecloth, carefully applying ketchup and mustard to a hotdog bun. He looked around, disappointedly, before his face registered a eureka moment. He pulled a hotdog out of his butt, placed it in the bun, and took a bite. The audience howled. 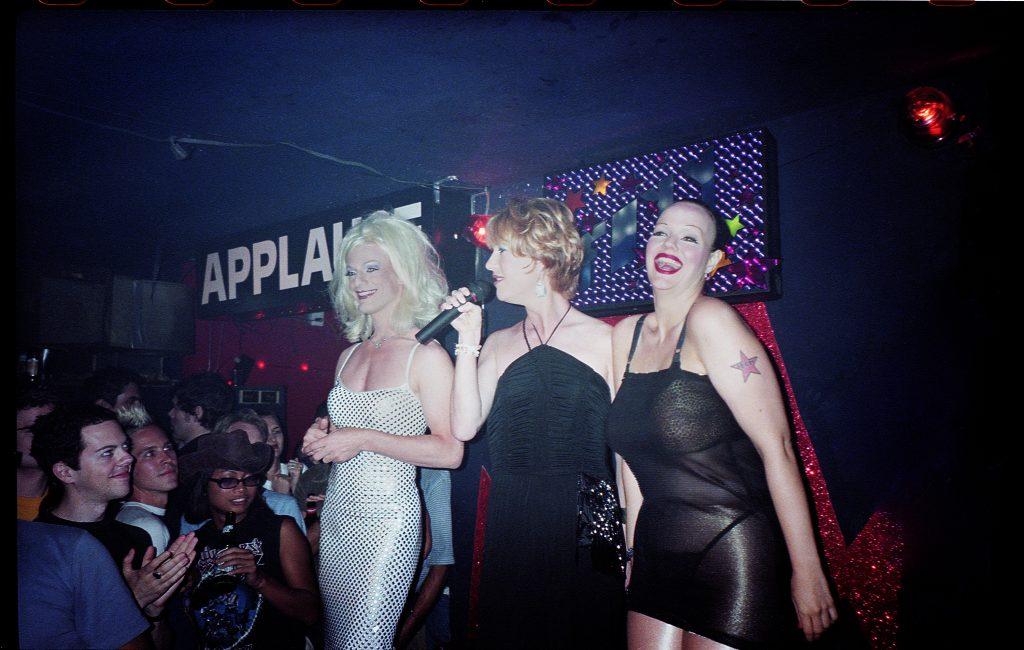 “She’d come in every week and put something different up her butt,” Bond recalls. “She put a literal Christmas tree up her butt and put flocking around it like a skirt, then bent over and had the audience decorate it. One time I said, ‘Oh, Krylon will put anything in there except for the kitchen sink.’ She was in the bathroom and heard me. She unscrewed the faucet and came out and had the faucet in her ass. There were all kinds of crazy things that you couldn’t do now because everybody has their phones. You could do whatever you wanted and it stayed in that room. Mr. Means was there to document it. He was the only one with a camera.” 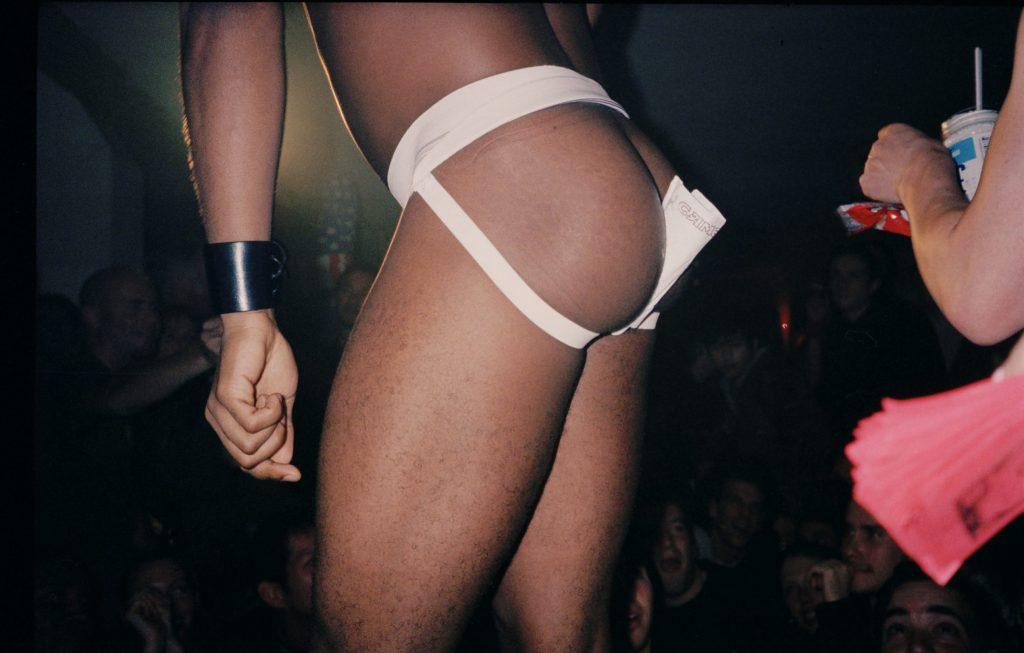 Everyone knew Mr. Means, who photographed for , , , and virtually every local indie publication. In 1994 he moved into a Williamsburg storefront and turned it into a studio/clubhouse for the creatively weird—including future members of the Foxy squad. He was a fixture at the Cock from its inception and made the glittery cardboard Foxy backdrop. He took photos because that’s just what he did. “It wasn’t a project,” he said. “l always had a camera on me. I was just hanging out with friends. But this space that my friends were creating seemed very special and unique.”

Despite the rampant nostalgia for 1990s New York nightlife, those pictures—examples of which illustrate this article—have never been published (and many more were too racy to include here). Mr. Means is now editing his stockpile of images from the Cock and other venues, such as Lux, Slipper Room, and legendary parties like Squeezebox, into a proposed book on the era’s club scene (its title derives from the draconian speakeasy-era laws that were rigidly enforced by then-Mayor Rudy Giuliani’s administration). Mr. Means has since decamped to New Orleans. “I feel very blessed to have experienced New York before it really shifted,” he said. 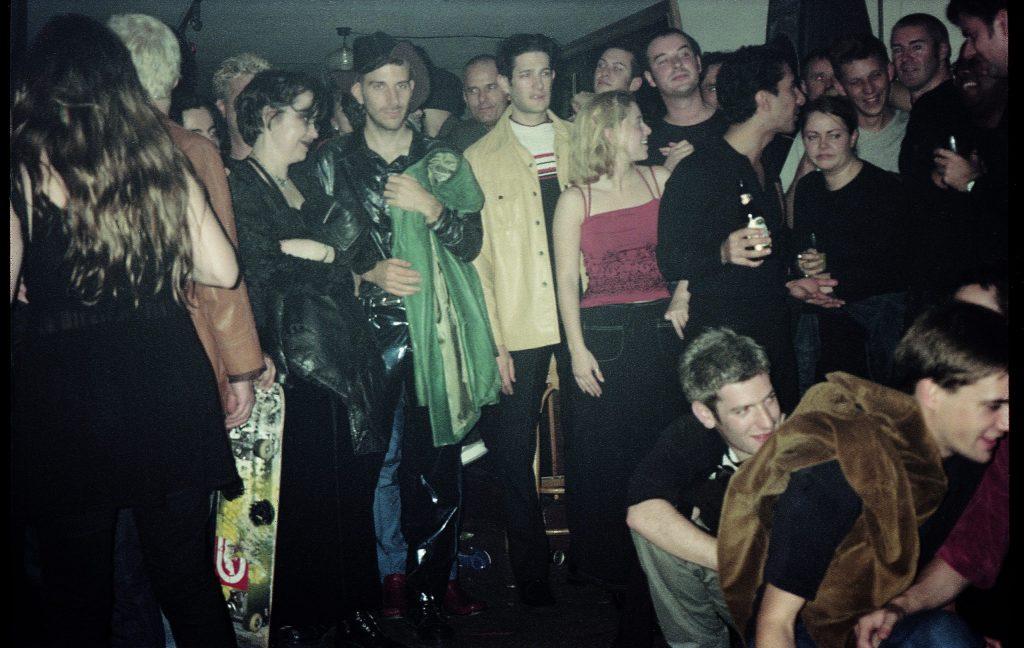 The crowd of Foxy in 1998. Mel Ottenberg is seated in the foreground. “I’d buy vintage clothes and resew the outfits to go to the Cock to have a look and also get laid. I wanted to be a fashion designer, but was too busy partying at the Cock to do anything about it. People liked my style and saw me around, and then I started getting styling gigs, which I didn’t even know was a career,” he said. Photo: Mr Means.

The images capture the whole Foxy cast of characters, including vicious wit Jackie Beat, the batty Cookie, and The World Famous *BOB*, who at the time was often referred to as a female female-impersonator. Mr. Means describes her thusly: “That magical pony, The World Famous *BOB*. She called herself the East Village tit clown. It’s hard to describe this beautiful woman. She’s a performance artist and was my muse.” Bob favored agrarian pinup-girl tropes. In one crowd-slayer, she did jumping jacks and aerobics in a Spandex leotard. She pulled multiple McDonald’s cheeseburgers from underneath her breasts and ate them while exercising.

Mel Ottenberg, today the editor-in-chief of , has a crystalline memory of the night that changed his life. “It’s August 1998. I graduated from the Rhode Island School of Design and moved to New York,” he recalls. “I’ve never really clicked with gay people before. These girls were like, ‘We have to go to the Cock. There’s this Saturday night called Foxy. Everyone’s talking about it. They do this contest and the most outrageous person wins $100.’ I didn’t want to go. I didn’t think it sounded cool. I nervously pulled up to 12th Street and Avenue A and walked in, and it was like when it goes from black and white to color. Everyone was so cool and there was rock music blasting. My reservations evaporated the second I walked in there.”

Ottenberg became a regular. “There was a mix of cultures and people,” he said. “There were hot muscle guys, punks, junkies, writers, architects, barfly drunks, weirdoes, and fashion designers like Alexander McQueen and Calvin Klein.” 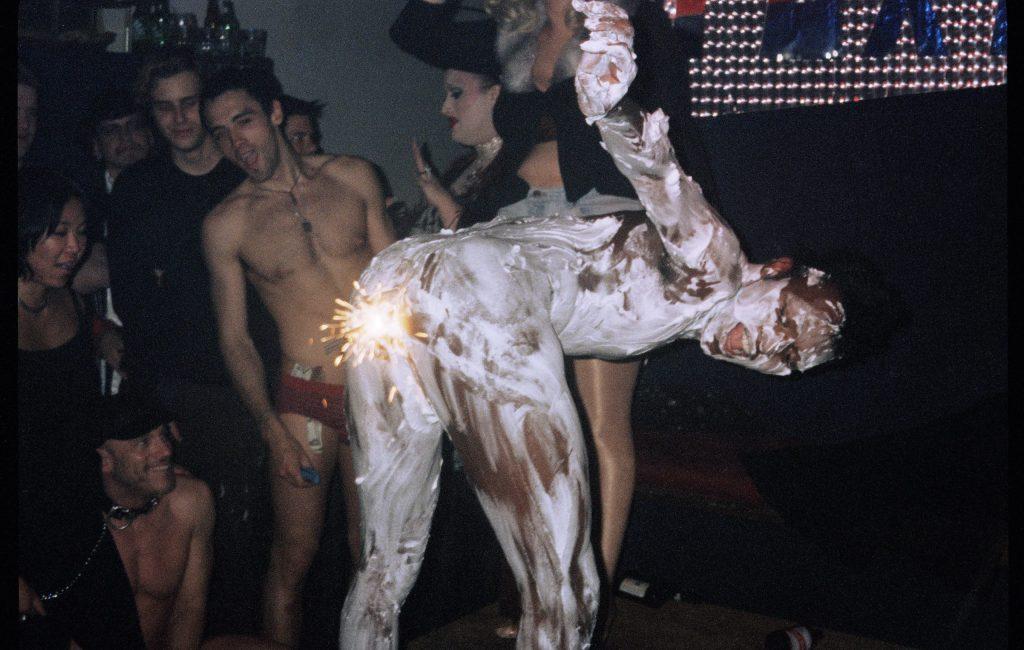 The Cock crested in a transition period for New York nightlife. The club-kid reign was waning; Michael Alig had recently been imprisoned. Mega-venues like Limelight and Tunnel were falling out of fashion, and the first iteration of the New York rave scene had hit a lull. The East Village had a vibrant culture of gay bars, but the drag, performance, and art-centric Pyramid scene had ceased. A handsome young promoter named Mario Diaz, whose previous efforts included the parties Hustler and Studio Filthy Whore, saw a hole that needed to be filled. 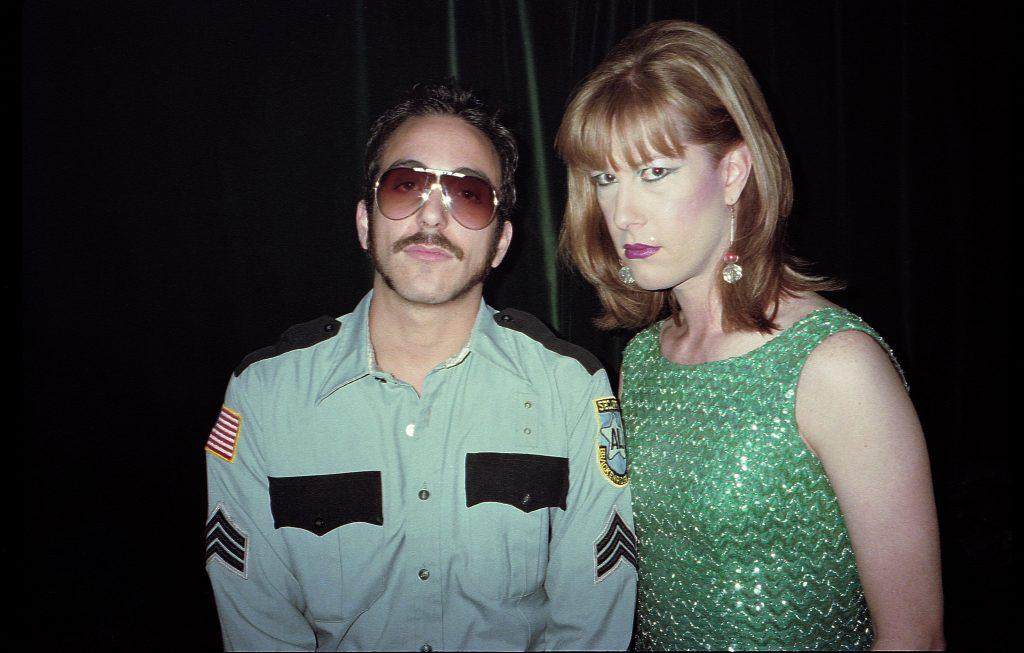 Mario Diaz and Justin Vivian Bond at Foxy in 1998. “The stream-of-conscious brilliance that would come out of their mouth every week…” Diaz recalled of Bond. Photo: Mr. Means.

Diaz threw Foxy about three times in downtown dive bars (and was banned after each outing) before setting up shop on Avenue A in 1998. An instant hit, the bar’s owner partnered with Diaz, and the Cock was born. The DJ and artist Scott Ewalt designed the beacon-like neon rooster sign outside. “My proudest achievement is creating that space,” Diaz said. “I got to see such brilliance there. Foxy was the greatest party I ever did, and I’ve been doing this for over 30 years.” 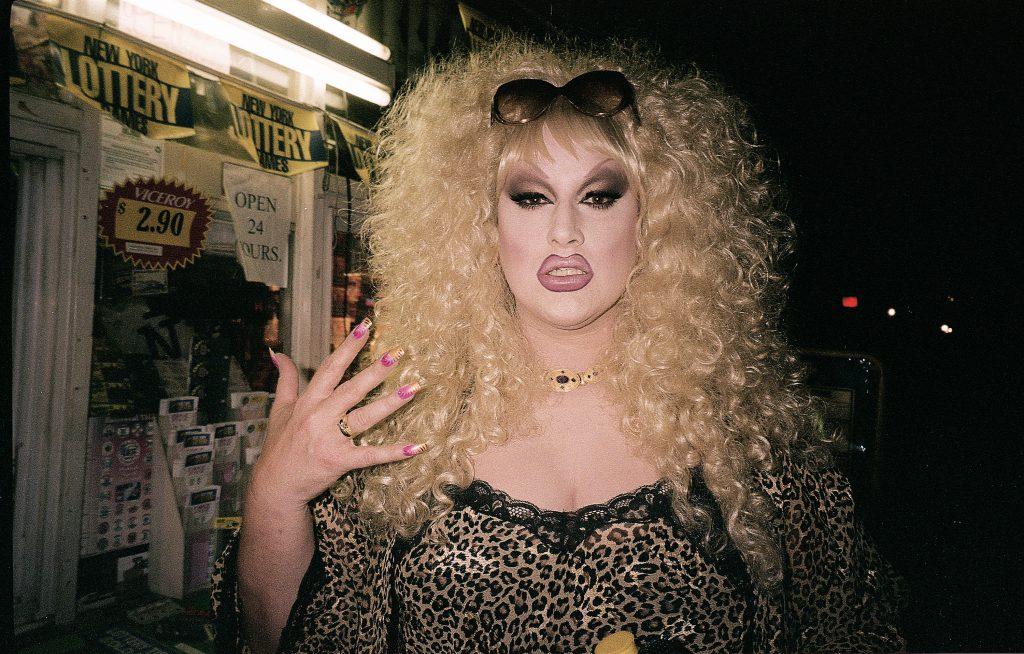 Foxy helped shaped a generation of artists, performers, and fashion denizens. “I had been to Studio 54 and this amazing club in San Francisco called Club Uranus, which had a kind of similar DIY radical queer aesthetic,” said Bond. “But the thing about Foxy [was that it was] happening right after the [HIV retroviral] cocktail. People could start to have sex again without feeling like they were gonna die. We wanted to make it a joyous whimsical celebration of sexuality, because there was so much guilt and shame around sex.” 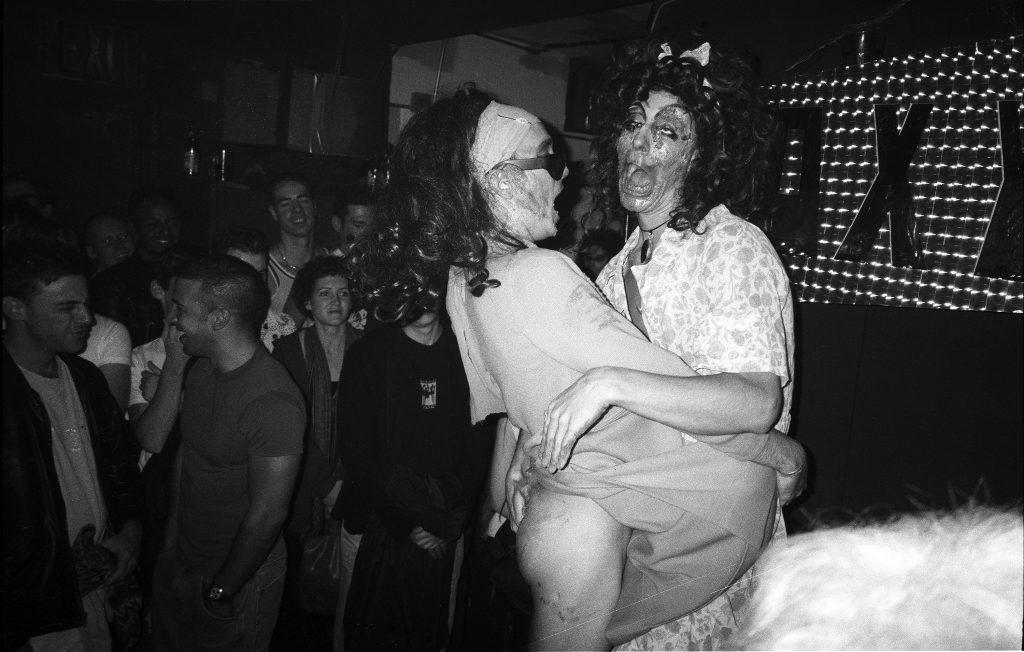 There were frequent police raids and the establishment was fined for dancing, public nudity, and other charges. “We were staging a revolution,” he said. “We were fighting against Giuliani and his ‘quality of life’ campaign. Not quality of life: he was targeting queer and POC venues. This whole puritanical wave that’s been destroying our country was in full effect. At the time, people sort of credited Giuliani for cleaning up New York, but he was really pushing homogenization and gentrification.”

Diaz’s staff was like a family of fabulous misfits. “I joke that we had a pneumatic tube from the Cock to my coffee table,” said Bond, who lived down the street. “Because the party would always end up at my house.” Every employee, from busboys and bartenders and strippers, remained for the three years Diaz ran the place.

But after years of capacity crowds, Foxy ceased around 2000, after Diaz fell out with his business partner. The Cock still exists, in its third East Village location. It’s still a fun, sleazy option, and Irene is still the charming door person who won’t let you in for free. But without its founding ringmaster, the nocturnal confluence of art, sex, performance, and wild abandon are gone.

“My essential mission was to be as loud and in your face and as sex-positive as I could,” Diaz said. “Everybody was on board with that good time. We were in the moment. We were wild, we were fearless.” 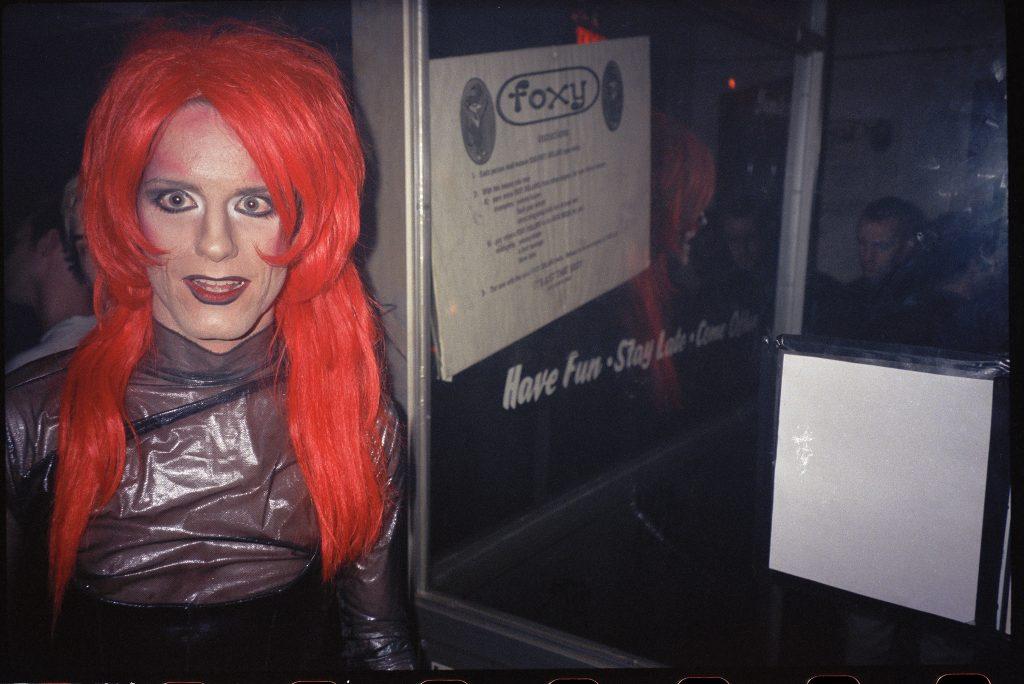 Roberta sees a sign at the Cock. Photo: Mr. Means. 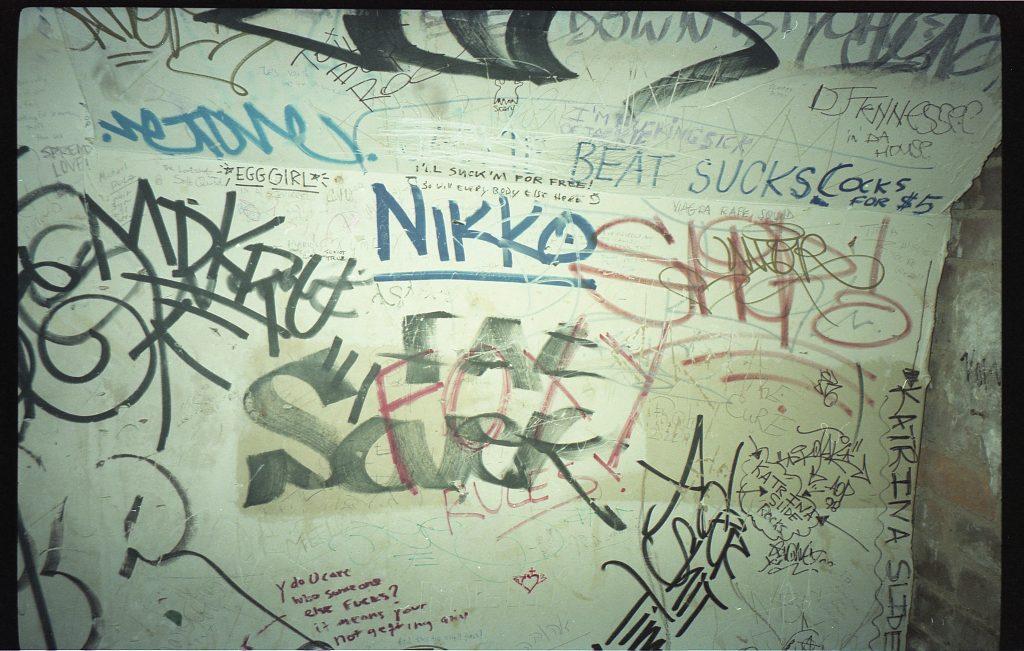 The bathroom wall of the Cock. Photo: Mr. Means. 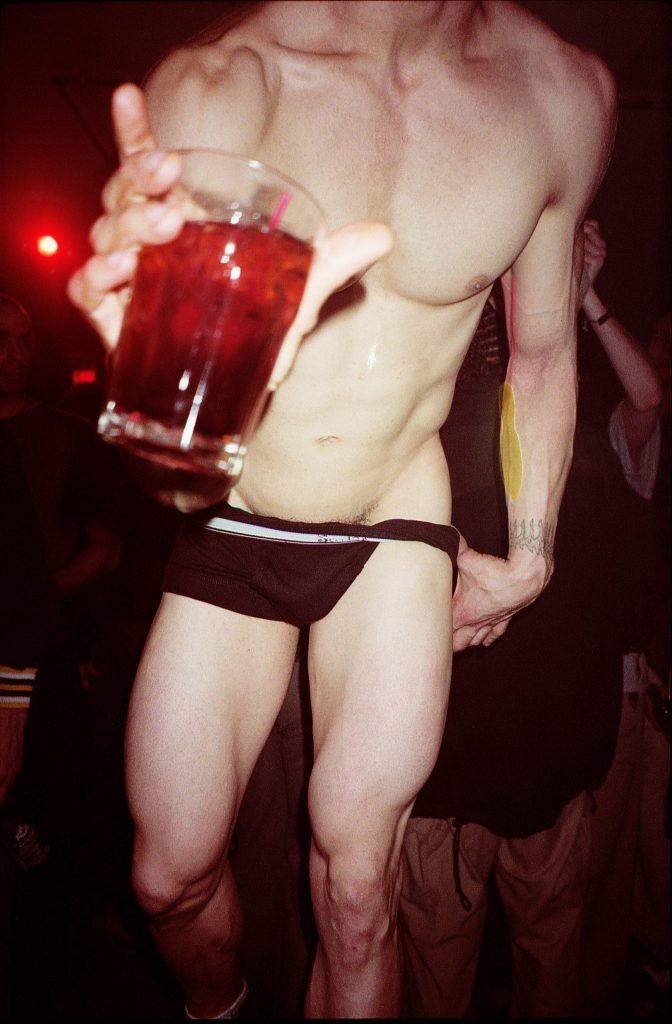