Home News Richard Prince: the master of appropriation who wants to feel like he... 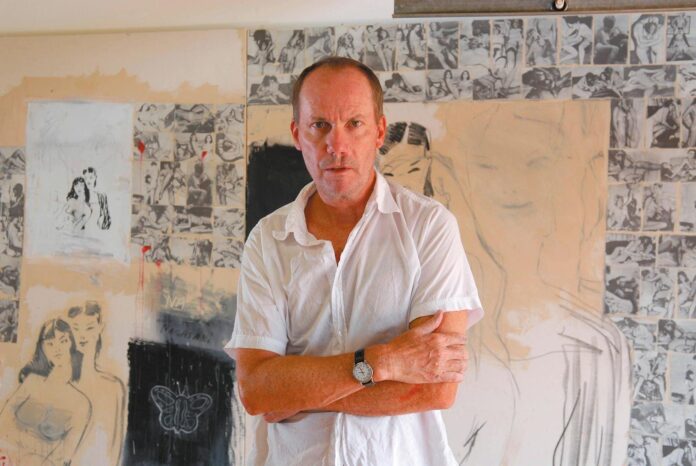 Prince’s new exhibition Same Man at the Louisiana Museum in Humlebæk, Denmark, features 89 works, including 60 on paper, and is his first presentation in Denmark. He spoke to The Art Newspaper about the exhibition and his work, in an office at the museum with a roaring fire and windows looking out onto the sea—a scene that recalled a Danish design fever dream.

The Art Newspaper: How did this exhibition come about, and why put on a drawing show now for the Louisiana on Paper series?

Richard Prince: Preparations for the exhibition began before Covid, so it’s been in motion for three or four years. The show is very much about Anders Kold, the curator, presenting my work, because I usually curate it myself. This could be only the second time my work has been shown with very little input from me. I’ve always thought that the premise of a medium-specific show would be difficult. From the late 1970s, my idea was always to create different bodies of work that had something to do with a specific subject matter [such as the cowboy, nurse or De Kooning series], whether that be in sculpture, photography or drawing. The subject came first and then the interpretation. I would have never attempted to curate this myself.

Why did you decide to call the exhibition Same Man, borrowed from the title of one of your works [Untitled (Same Man Looking in Different Directions) (1977-78)]? Are you the same man as the artist who started out in New York in the 1970s?

In terms of the title, it speaks to the question of an artist’s signature or style—or rather, not having one. I don’t really want to talk about other artists, but I was looking at a fantastic Meret Oppenheim painting the other day, in which these surreal rocks emerge from the ocean [Stone Woman, 1938]. The fact that she could do that and then make a sculpture like the fur-lined teacup [Object, 1936] is extraordinary: they are by the same woman, but you’d think it was two very different artists. I’m the same man that goes into the studio every day and I want to feel like I can do anything I want. I can work on a piece for four, five, sometimes ten years and it’s not until there’s a particular moment of revelation, contribution or recognition that I know it’s even art at all. I don’t know how other artists work, but I was glad to walk past the [Sigmar] Polke room on the way to my show here at the Louisiana. I first discovered him in the mid-1980s, and I always imagined that Polke and [Gerhard] Richter had similar days to me: they weren’t governed by one particular way of working or having to make something look like a Polke or a Richter. They went into the studio and discovered.

In a video accompanying the exhibition, the Danish artist Joachim Koester talks about how it often feels like something is left out of your signature cowboy pictures. He observes that “there is no trace of the genocide of the Native Americans, or the tycoons, or the mining, logging, or oil industries”. What did you choose to leave out of your cowboy rephotographs?

It was not so much about leaving out as much as what’s left in. It’s the opposite. When I started rephotographing, I knew nothing about the camera. I was working at Time Life magazine, and it was my job to make sure all the image parts went to the person who wrote the editorial. So at the end of the day, after tearing up these magazines, I was left with the advertisements. They were right next to me. What they promised was something impossible but also something that I could believe in.

In the mid-1990s, you created an untitled series of text and image works that featured personal vignettes alongside a portrait and the names of corporate America monoliths such as Citibank or McDonald’s. Do these relate to a sense of belief or are they just making a joke?

That’s just part of the American landscape; that’s where I live. Those images and words are what you run into every day. The portraits give some sort of ground that’s not made up, that exists and is real. They’re personal, but then the words are already in the public domain, part of what everyone else has already shared or critiqued, and therefore have their own belief system. Together they have some kind of elemental truth.

What do you mean by elemental truth?

Well, it has a bit of the truth. Ultimately what I’m interested in is agreement, which is such a powerful emotion because in my experience
there are not so many situations where two people agree.

That sounds like a very sincere aspiration for the making of art, but it also reminds me of your work I’m not Linda (1992), which depicts a dialogue: “I waited on the corner for my blind date. When this girl walked by, I said: ‘Are you Linda?’ She said, ‘Are you Richard?’ I said ‘Yeah.’ She said, ‘I’m not Linda.’” It’s a funny encounter because there is both agreement and disagreement at the same time, or rather agreement based on
false premises.

Over the past few years, your work has responded to the structures and self-presentation of social media, and critics have labelled you “the artist of Instagram” because of how you have turned the Insta-screenshot into an artwork. Who is your Instagram handle ‘Joan Katz’?

The pseudonym, the fake name, has always interested me. You tap into a part of you that you don’t really want to. It’s a way of letting something out that you wouldn’t let out in another way. The Instagram portraits or Instagram itself is just another magazine to me; I use it as subject matter in the same way that I used the magazine for more than 20 years. After I was first introduced to Instagram, it was just a way of continuing this idea of portraiture which I developed in the 1980s. You didn’t come to sit for me to make your portrait: you give me five, six or seven pictures of yourself that you already liked and I would rephotograph one that I liked and that would be your portrait. The tools were easy to use.

Screen-saving [images] works in a similar way, but that was a revelation to me. And the idea of storing images on your phone in a grid reminded me of the gang portraits that I used to do. I became obsessed by the idea that I could take a portrait of someone I knew or almost knew or wanted to know. Those are all things that attract me to a certain type of portrait, and so that’s what I did. It’s the same as why sometimes I’ll pick up a ballpoint pen and make a drawing on a piece of paper, because there’s no mystery to it. I’m not trying to fool anybody. It’s basically the same as working on your phone, which I consider to be an extension of the studio. I have this term called “post-place” and I think that’s where we spend most of our intimate time. You can be anywhere at any time, under any circumstances. I could make an Instagram portrait of you right now, as we speak. I like those advantages. It’s how I want to spend my day. That’s a great way to get out of labour, right?