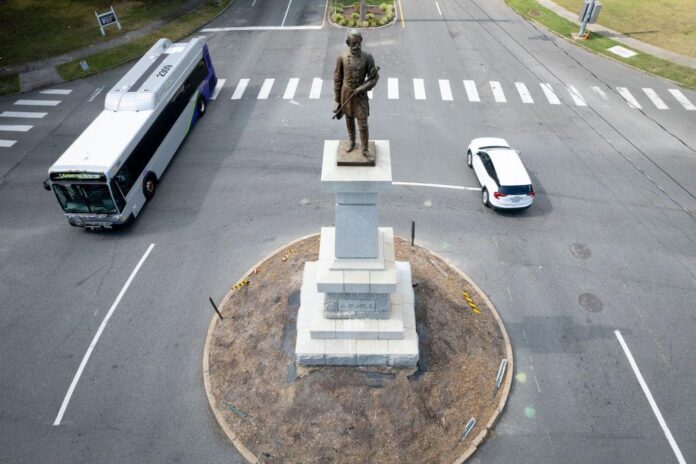 The status of the 130-year-old statue, which depicts Confederate General A.P. Hill, has been in limbo since 2020, when four of his indirect descendants filed a lawsuit attempting to block its removal.

More than a dozen Confederate memorials in Richmond have been taken down in recent years—and some, like the infamous statue of Robert E. Lee, were similarly mired in litigation beforehand. Removing the Hill sculpture proved to be particularly complicated, because the monument doubled as a grave: it was erected atop the General’s remains in 1892.

Last week, however, a Richmond Circuit Court Judge rejected the heirs’ motion to halt the dismantling process, allowing the city to proceed with its plan.

Over two years ago, Richmond was home to more confederate statues than any city in the United States. Collectively, we have closed that chapter.

We now continue the work of being a more inclusive and welcoming place where ALL belong. pic.twitter.com/3DHUSUg2Ea

Richmond Mayor Levar Stoney—who in June 2020, amid country-wide protests over police brutality and racism, ordered the removal of all Confederate statues in his city—arrived at the intersection of West Laburnum Avenue and Hermitage Road this morning to watch the Hill sculpture being taken down.

“Over two years ago, Richmond was home to more confederate statues than any city in the United States,” Stoney wrote on Twitter. “Collectively, we have closed that chapter. We now continue the work of being a more inclusive and welcoming place where ALL belong.”

All the Confederate statues previously removed from Richmond have been transferred to the Black History Museum and Cultural Center of Virginia. The city is seeking to move the Hill monument to that institution, too, but the General’s decedents are instead fighting to have the sculpture relocated to Cedar Mountain Battlefield, where he fought in 1862.

As the heirs’ case goes through the appeals process, the statue will temporarily be placed in storage, according to the AP. Meanwhile, per an agreement between Richmond city officials and the decedents, Hill’s remains will be moved to a cemetery plot in Culpeper, Virginia, where he was born.

To date, Richmond has spent at least $1.8 million removing its Confederate monuments, the Richmond Times-Dispatch reported. Evidence recently provided in court suggested that further delays to the relocation of the Hill monument would result in more than $30,000 in additional costs.

How Long Do I Need to Hold an Artwork Before Selling It to Avoid Being Labeled a Flipper? + Other Art-Trade Questions, Answered