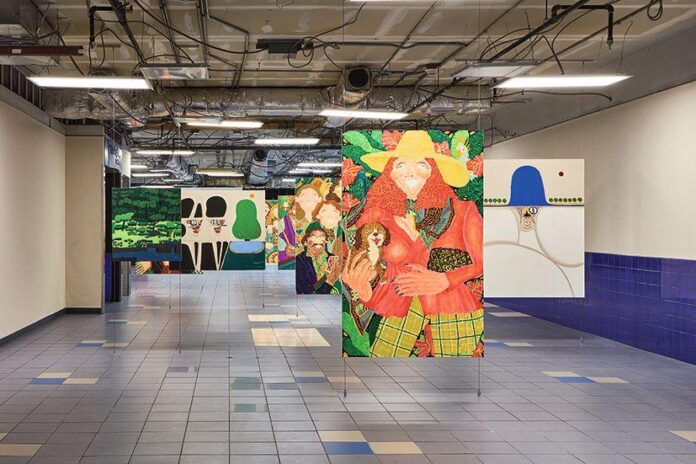 The arid metropolis affectionately known as Sin City has made vacillating strides to rectify its reputation as a cultural desert over the years. The latest venture to land there is the nationally roving Artist / City exhibition series, conceived by the New York-based dealer Stefania Bortolami, presenting art in off-beat environments around the US. For its Las Vegas iteration, a decommissioned bus terminal near Fremont Street has been converted into a temporary gallery with paintings by Jonas Wood, Susumu Kamijo and Koichi Sato hung from the ceiling.

“I didn’t pick Las Vegas necessarily because of Las Vegas, but what I’ve discovered from doing this project all over is that every city has a pool of collectors; mostly they go to New York, sometimes Los Angeles, or Miami art fairs,” Bortolami says. “Would I open a gallery in Vegas? No. But we do have some collectors here, and many artists are interested in spending time in Las Vegas, so maybe there could be a market worth tapping into.”

The dealer Emmanuel Perrotin has also gambled on the city’s art-market potential, partnering with MGM Resorts International to open a store earlier this year at the Bellagio casino and resort on the Strip that sells palatably-priced prints, editions, publications and artist-designed objects by stars of its roster like Maurizio Cattelan and Takashi Murakami. Perrotin entrepreneurially implied that the store has the power to democratise art, stating that “art is for everyone”, even those not well versed in contemporary art or who cannot afford to purchase blue-chip works.

These new spaces and projects are small signs of progress for a city that has long struggled to assimilate fine art into its panoply of cultural offerings. Pace Gallery opened a store in the Bellagio in 2002 that closed just five years later. No blue-chip galleries have permanent outposts in the area. And most of the art on public view belongs to corporate casino collections and is dispersed throughout properties along the Strip.

The first major cultural milestone for the city was orchestrated by casino magnate Steve Wynn—who resigned as chairman and chief executive of Wynn Resorts in 2018 following a series of sexual harassment accusations—when he opened the Bellagio Gallery of Fine Art in 1998. The gallery originally showcased works from Wynn’s personal collection, valued at $400m—pieces by artists like Henri Matisse, Claude Monet and Pablo Picasso—and charged $10 admission. Although the works were available for sale, most visitors were spectators, with a survey revealing that around 30% had never previously entered an art gallery.

The gallery temporarily closed when MGM acquired Wynn’s properties in 2000 along with around $200m of his art collection in a $4.4bn merger. It later reopened with rotating exhibitions managed by MGM’s art and culture department, which has worked to boost its contemporary art holdings, sometimes by deaccessioning the European masterworks it inherited from Wynn.

Wynn’s collection came into the spotlight again last year, when MGM sought to offset its debts with a Sotheby’s sale in Las Vegas of Picasso paintings that the gaming mogul had hung in the Picasso restaurant at the Bellagio. The sale performed well against its estimate ($70m-$100m), fetching $110m (with fees) and solidifying Las Vegas as an “undeniable site to congregate a global audience”, says Julian Dawes, a senior vice president and head of the Impressionist and Modern art department at Sotheby’s.

“There’s an enormous amount of wealth, not just from casinos and global clients but also from recent sports and entertainment industries, that allows the market to be integrated into the larger population, even if still a small and rarefied population,” Dawes says. “There are opportunities for Perrotin or whoever else to say that art is on the menu, and that you should have good things.”

Art adviser Michele Quinn of Las Vegas-based MCQ Fine Art argues that there is still headway to be made before the city can become a full-fledged art destination, and that for now there is a particular strength in the pop-up model. Earlier this year, Quinn partnered with Marianne Boesky Gallery to hold an exhibition of works by the Haas Brothers in downtown Las Vegas.

“The long-term gallery model is just unsustainable; we’re not a walkable city outside of the Strip and tourists are not here to focus on art even if the gallery is on the Strip,” Quinn says. “People don’t equate Las Vegas with fine art collecting. The pieces have to be more decorative or architecturally integrated, and it’s hard for them to compete on a visual level with everything else going on around them because this place isn’t built for quiet reflection.”

An anticipated Las Vegas branch of the Reno-based Nevada Museum of Art, announced in 2018, was scrapped in 2020 due to insufficient funding exacerbated by the Covid-19 pandemic, according to the chief executive David Walker. The museum would have cost around $250m and was envisioned as a global destination that would “not emphasise tourism, which is why maybe some past attempts to build a museum there, like the Guggenheim, have not worked”.

Walker refers to a failed partnership between the Solomon R. Guggenheim Foundation and the Venetian casino and resort in 2001, when the foundation opened two Rem Koolhaas-designed museums and a gift shop inside the casino. The Guggenheim Las Vegas closed after 15 months and a single exhibition, and the Guggenheim Hermitage Museum, a smaller adjoining museum, closed nearly seven years later, similarly due to ailing funds and poor attendance.

The Marjorie Barrick Museum of Art at the University of Nevada, Las Vegas, is the only extant fine art museum in the city. It was founded in the 1960s as a natural history museum and has rebranded as a contemporary art museum over the past decade, before it was nearly forced to close due to lack of state funding. It holds a significant collection, but the museum is tucked away on the university campus and not easily accessible or advertised to tourists.

Although projects with little commercial viability still face bleak prospects of success in Las Vegas for now, arguably some of the best art offerings in and near the city are largely free from its capitalist trappings, from Ugo Rondinone’s mega-popular neon cairns Seven Magic Mountains (2016) to Michael Heizer’s Double Negative (1969) and City (1970-2022), the latter of which opened to visitors in September. But these works require a pilgrimage beyond the Strip, and their true value to any visitor or local is inherently subjective.