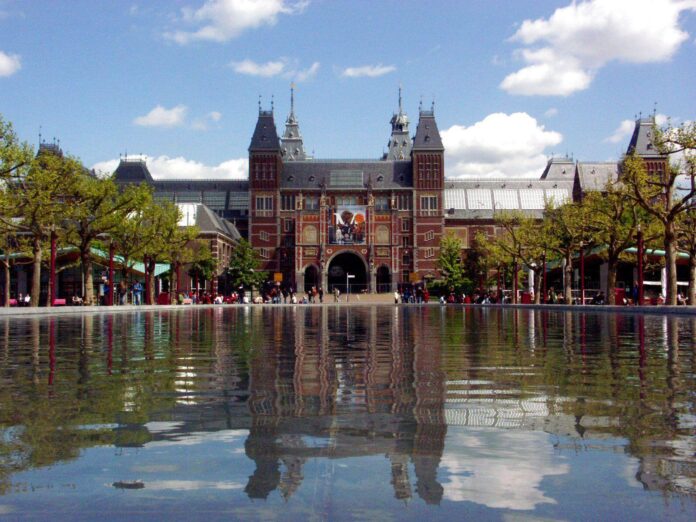 The Rijksmuseum, the national museum of the Netherlands, has issued a stringent rebuttal to reports that claim the museum is sinking. The news site Bloomberg reported last month that this summer’s drought—the worst in 500 years, according to the European Drought Observatory—has created a fungi that is eating away at the Amsterdam museum’s wooden foundations. A spokesperson said the museum “has not sunk a millimetre”.

According to Bloomberg, the museum—which houses masterpieces including The Night Watch (1642) by Rembrandt van Rijn and The Milkmaid (around 1660) by Johannes Vermeer, among others—is beginning to list to one side as some of the 8,000 wooden poles on which the museum rests have been weakened by fungi.

But a Rijksmuseum spokesperson said the museum was not in danger of sinking and that the foundations remain robust after a ten year refurbishment. “The Rijksmuseum building was extensively renovated between 2003 and 2013. This renovation included the foundations. The fact that since 2013 the building is completely stable proves this was done right. The current effects of climate change have no impact on the stability of our monumental building. Since the renovation in 2013 the building is continuously monitored.” They added: “Fungi rotting wooden poles is indeed a problem in many parts of the Netherlands including Amsterdam, but not for the Rijksmuseum.”

Dutch citizens are traditionally more concerned about flooding than drought, as sea level rises brought about by climate change could devastate the marshy, lowland country. To avoid being flooded, most buildings constructed in the Netherlands before 1970 are propped up on foundations made of wooden poles.

But, after this summer’s prolonged drought, the country is now facing problems from not having enough water. In Amsterdam, it led to falling groundwater levels, which in turn exposed foundational wooden poles to the air. This attracted a form of fungi that is eating away at the wood and threatening thousands of the country’s buildings with collapse.

Matthijs van der Lugt, an architect at the firm Braaksma and Roos, which is based in The Hague and specialises in historic buildings, said drought was already causing other problems for heritage sites in the Netherlands. He says that comparable wooden pile foundations are used in other European countries including Germany, Sweden and throughout the canals of Italy’s Venice.

Van der Lugt tells The Art Newspaper : “Drought can cause the wooden posts to become dry, causing them to rot and cause subsidence. Drought can also cause the polder floor to sink. If this happens unevenly, which often happens in inner-city areas, a monument will sink unevenly and you will get crooked buildings and large cracks. An example of foundation problems is Remonstrant Church, in the Westersingel area of Rotterdam and St Francis Church in Oudewater.”

He adds: “If you want to prevent foundations from becoming dry, you can raise the groundwater level. However, this can pose major problems for other properties such as watery basements, wet walls and mould.”

After spending years trying to keep water out, the Dutch are now attempting to keep groundwater in, so as to prevent building foundations from drying out. Home owners in the Netherlands are facing bills of between €60,000 to €80,000 to fix the problem, with wooden pole foundation expertise now a niche business. It is estimated it could take €100bn to repair all the homes in the Netherlands that are sinking due to the retreating groundwater.

For cultural institutions housed in older buildings across the country, it is yet another potentially costly challenge posed by climate change.