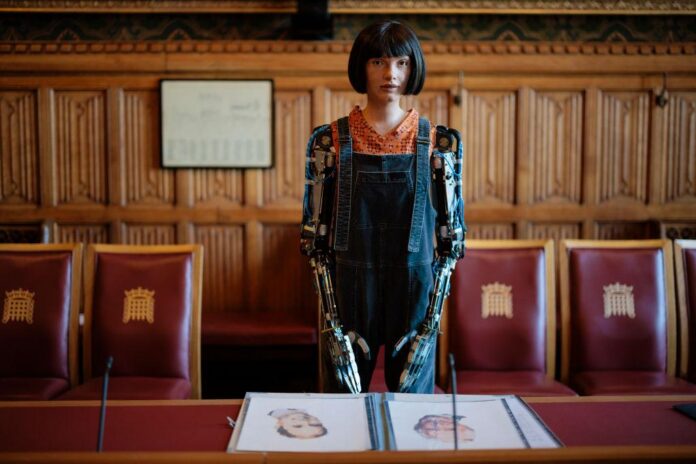 The artificial intelligence-powered robot Ai-Da has become the first of her kind to speak at the U.K. Parliament after addressing the House of Lords yesterday, alongside her creator, artist and gallerist Aidan Meller.

She appeared before the peers of the Communications and Digital Committee to give evidence on the impact of technology on the creative industries.

The humanoid robot artist, whose name is a tribute to the mathematician Ada Lovelace, was developed in 2019 by Cornish robotics company Engineered Arts and computer A.I. researchers at the universities of Oxford and Birmingham.

Conceived as a contemporary art project intended to explore the artistic potential of A.I., Ai-Da has made headlines in recent years for a number of artworks, including a portrait of Queen Elizabeth to celebrate her Platinum Jubilee and “Leaping into the Metaverse”, a solo exhibition in Venice during this year’s biennale. 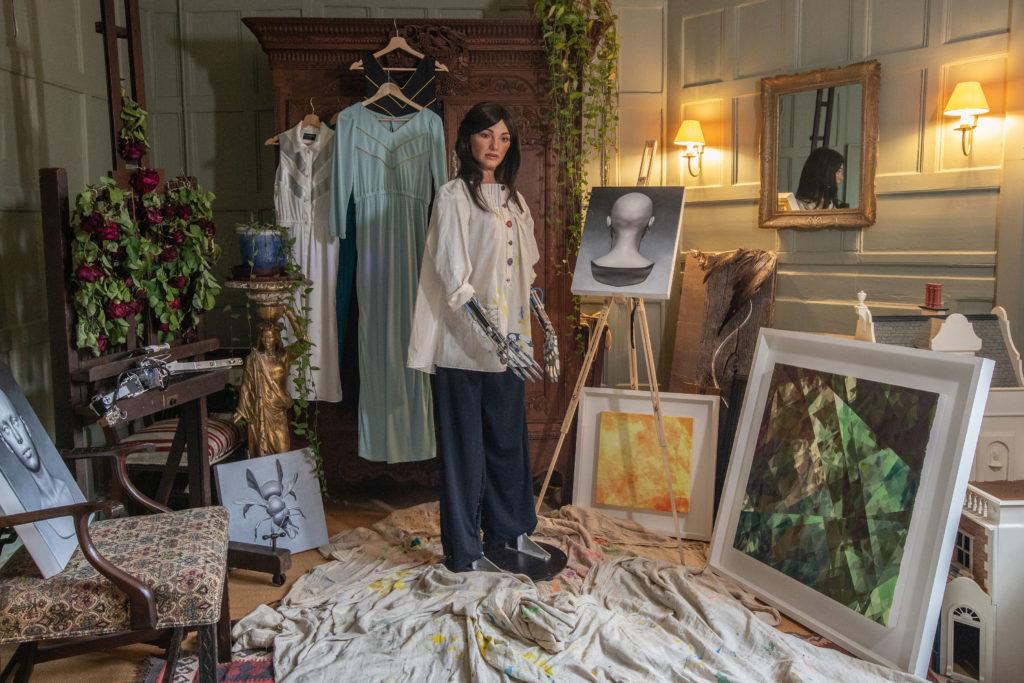 “I thought, is it actually possible that we could critique, comment and look at this world of technology by actually the technology speaking for itself?,” Meller explained while introducing Ai-Da during the parliamentary session.

She answered questions that had been submitted in advance to ensure a higher quality of responses pre-prepared by the A.I. language model.

“The role of technology in creating art will continue to grow as artists find new ways to use technology to express themselves, and reflect and explore the relationship between technology, society, and culture,” Ai-Da said.

“Technology has already had a huge impact on the way we create and consume art, for example the camera and the advent of photography and film. It is likely that this trend will continue with new technologies,” she added.

“There is no clear answer as to the impact on the wider field, as technology can be both a threat and an opportunity for artists.”

Ai-Da was responding to Baroness Featherstone, of the Liberal Democrats Party, who had asked about the future role of technology in creating art. Featherstone went on to ask Meller if he was a “puppetmaster” of the robot.

He explained that the dataset Ai-Da used to make art could be as large as the whole internet. “I’ll give an example of how far-reaching this is, which is very upsetting for humans,” he said. “We actually do ask her about the work, what she would like to do and what her ideas are for it. We are able to get quite a collaborative conversation going about what potential areas of data she could look at.”

Featherstone replied that she was “partly terrified” by what he was saying. “This feeds into all the films about A.I. taking over the world,” she said, adding that the sophistication of the technology surpassed her expectations.

At one point, Ai-Da appeared to fall asleep and had to be rebooted. She wore sunglasses during the process because, Meller explained, “when we reset her, she can sometimes pull quite interesting faces.”

Ai-Da uses the cameras in her eyes and computer vision algorithms to interpret what is in front of her. Her robotic arms are then mobilized in reaction to this information through a custom control system, allowing her to paint.

Meller, who is also a gallery director, said “the greatest artists questioned and engaged with the societal shifts within their times. The more I read about the future and where we were going as a world, I realized this very much needed debate about the nature of technology wasn’t having a lot of airtime. I increasingly became very worried about it.”

“I want to be very clear that we’re not here to promote robots or any specific technology. It really is a contemporary art project.”

The Curator of a New Mondrian Show Made a Startling Discovery: Its Star Painting Had Been Hung Upside-Down for 75 Years