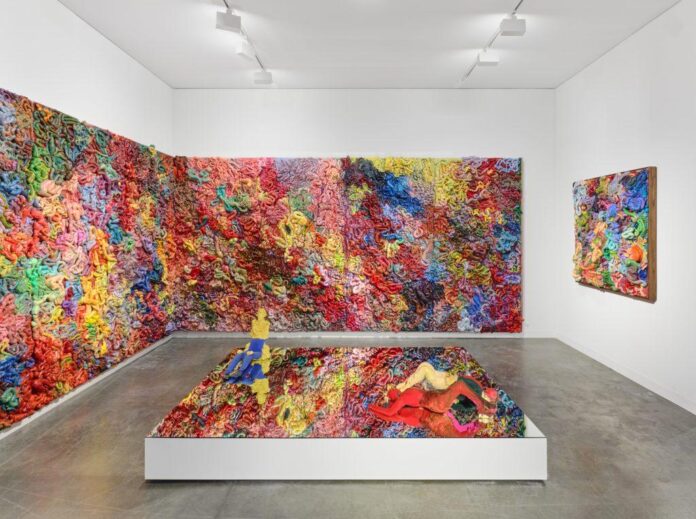 Picking which galleries have the best booths at an art fair is like choosing which Michelin-starred chefs make the best midnight snacks on vacation. It is probably not the work they are most proud of; that happens back at the gallery. And like a late-night grilled cheese, an art-fair booth presentation is more of a means to an end than a meticulously crafted symphony of the senses.

Perhaps even more than usual, dealers at this year’s Art Basel Miami Beach opted for a pu pu platter strategy, displaying one or two works each by a range of gallery stalwarts. That is a safe bet in a time of economic uncertainty, but it does not make for a thrilling viewing experience.

Still, a handful of galleries took a slightly riskier approach and managed to develop booths that stood out among the record 282 exhibitors from 38 countries. (It helps that the fair’s special sections, like Survey and Positions, require single-artist presentations, which make a more lasting impression.)

I spent a total of eight and a half hours pounding the Miami Beach Convention Center pavement to bring you five booths—one from each section—that are worth seeking out. 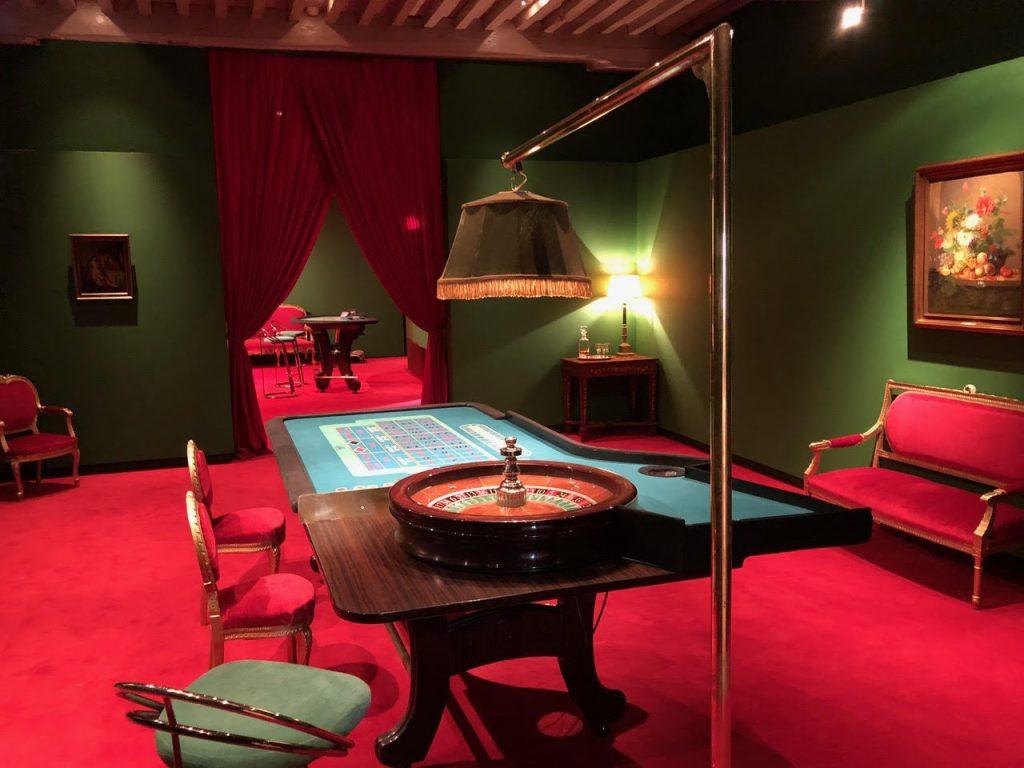 It’s a common joke that an art fair can feel like a casino. You lose track of time inside, there’s very little daylight, and people all around you are taking bets. Meredith Rosen makes that analogy literal in ABMB’s Survey section, where she restaged Belgian conceptual and installation artist Guillaume Bijl’s Casino(1984). Behind red velvet curtains, the art-fair booth has been transformed into a retro casino, complete with a roulette table, a blackjack table, cheesy prints on the walls, and two professional croupiers. “It’s a faux space in a faux space,” said the gallery’s Alex Berns. This marks the first time the project has been restaged since its premiere at S.M.A.K. Ghent in 1984. (During that first outing, undercover police raided the museum, convinced it was a genuine unauthorized casino.) Visitors can’t play for real money, but the work itself is priced at $250,000. 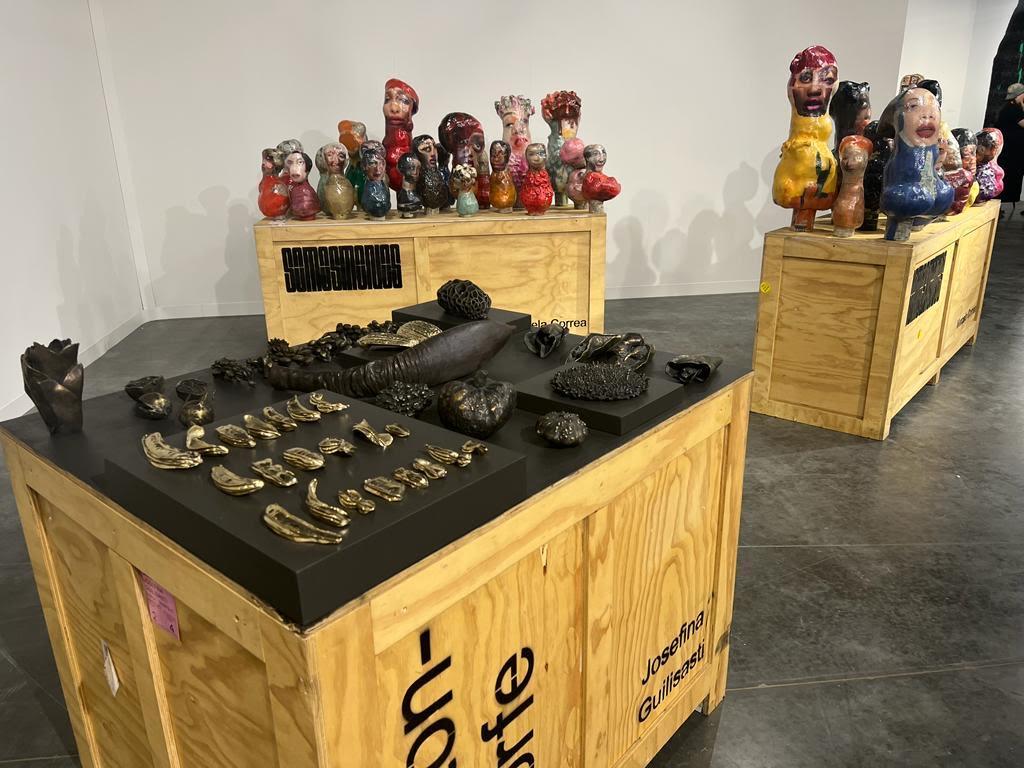 Some two-person presentations feel forced; this is not one of them. Josefina Guilisasti and Marcela Correa have studios next door to one another in Santiago and are constantly peeking at, and speaking about, what the other is working on. The artists also share a common interest in climate and migration, and the effects one has on the other.

In Miami, each artist is presenting a series of small sculptures atop shipping containers at Galeria Patricia Ready’s booth in ABMB’s Nova section. Guilisasti created bronze casts of plants and flowers native to Chile and Peru whose existence may be threatened by climate change. Correa—best known for her monumental installations—created surreal, anthropomorphic blob-shaped figures with faces pulled from magazine clippings. The display serves as a reminder of the kind of intimate, small-scale work artists developed during the days of lockdown. Guilisasti’s sculptures are priced at $635 to $10,000; Correa’s are $2,500 to $6,000. A number sold during the fair’s VIP preview. 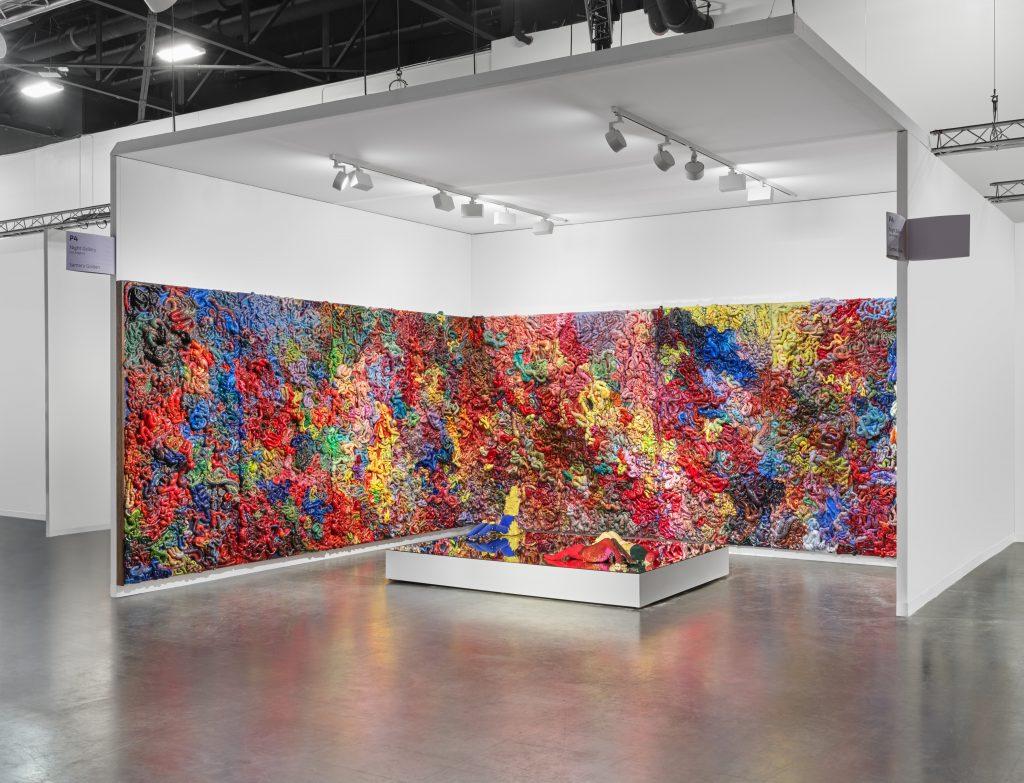 Samara Golden spilled her guts to produce her installation at Night Gallery in the fair’s Positions section. Well, not literally—but it sure looks like it. The eye-catching sculptures and wall panels look like tightly packed viscera, but they are made with materials available at a hardware store: expandable foam, acrylic paint, balloons, etc. Golden is best known for meticulously rendered mirrored installations, often developed alongside structural engineers, that invite viewers to peer into imagined interior spaces. With this new body of work, which began with a show earlier this year at the Los Angeles gallery, she is flexing her more painterly, impressionistic muscles—but still exploring what’s beyond the facade. The installation is priced at $250,000; a number of the sculptures sold for $20,000 each during the VIP preview. A small wall panel, priced at $50,000, also sold. 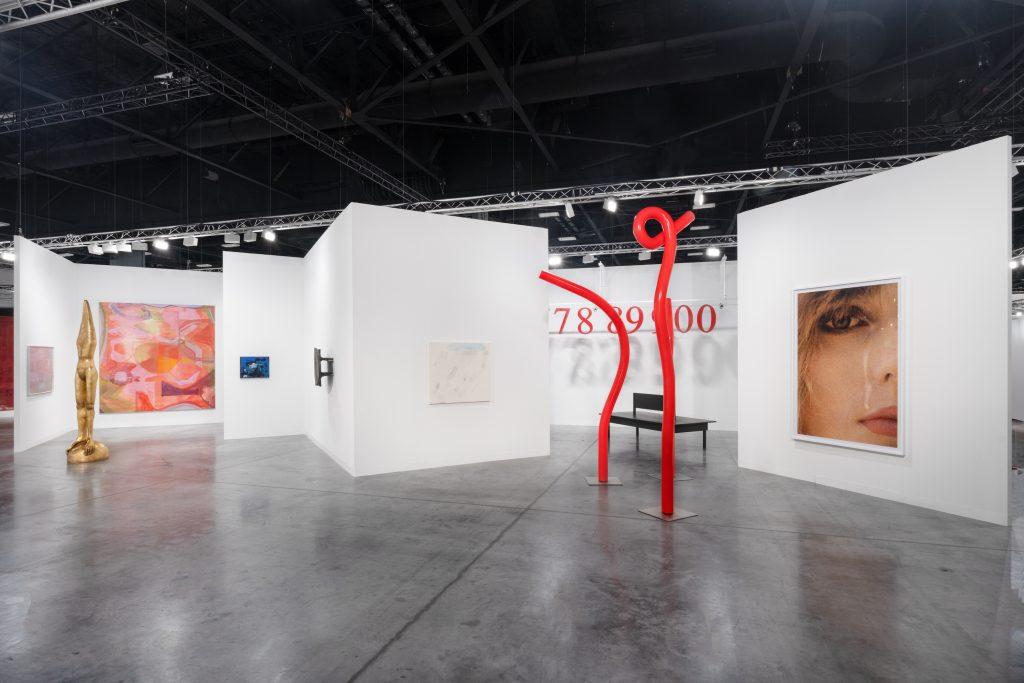 The Glasgow gallery represents a considerable number of artists who specialize in witty and wry work, so it makes sense that their contribution to the main gallery section would have a good sense of humor. The anchor of The Modern Institute’s display is a cluster of works by the Los Angeles-based Andrew J. Greene on the back wall. The artist, who is interested in laying bare the surrealism of American consumerism, created a series of piñatas in the shape of numbers and a group of vending machines filled with bizarre, useless objects. The gallery also configured the booth’s walls to allow for mini “rooms” dedicated to other artists, including its newest addition, Alberta Whittle, and the first to join the gallery, Martin Boyce. Works by Green are priced between $15,000 and $50,000; Boyce’s works are listed at between $30,000 and $60,000. 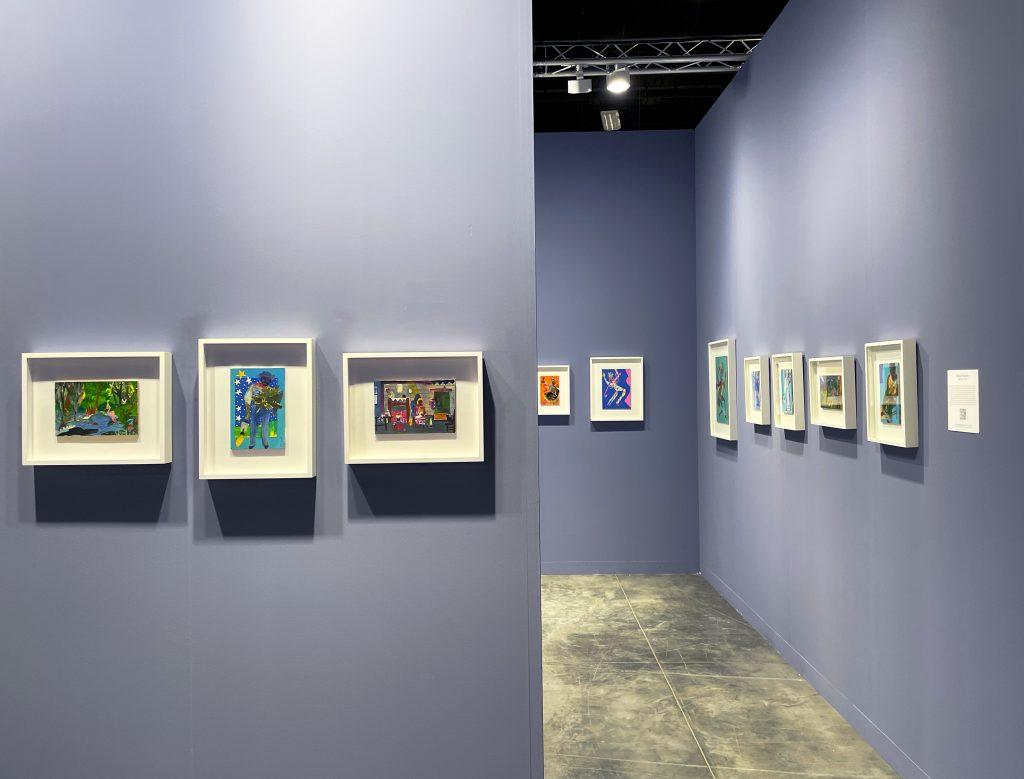 Every so often, an art fair offers the rare opportunity to see a body of work you might never have been aware of otherwise. For Kabinett, Art Basel’s section for curated displays, DC Moore presented a little-known series of 21 postcard-size works by famed collage artist Romare Bearden. Bayou Fever tells the story of a dramatic confrontation between two magical figures—the Conjur Woman and the Swamp Witch—in a rural cabin in Louisiana. Bearden originally conceived the series for a ballet he hoped would be staged by Alvin Ailey. While that never came to pass, the intimate collages are packed with clever moves of their own: the Conjur Woman, for example, arrives on the scene with a tangle of string meant to represent ropes that can turn into vipers. The series remained in the possession of Bearden’s widow—a dancer herself—until her death in 1996. It is on offer for $4.2 million.