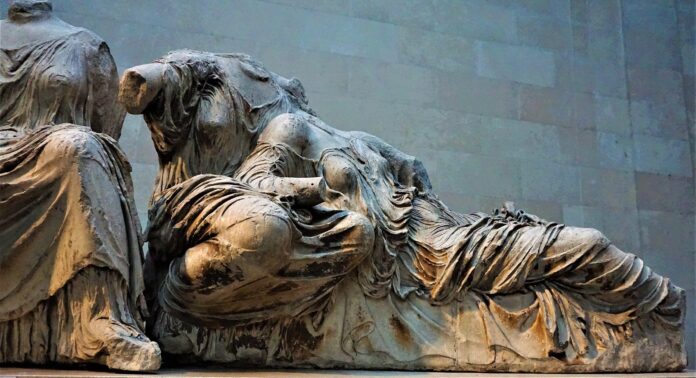 After more than 200 years at the British Museum, the Parthenon Marbles may soon return home to Greece, a move which would resolve one of the long-running disputes in the global museum sector.

George Osborne, the chair of the British Museum, met with Kyriakos Mitsotakis, the Greek prime minister, in London last week, with the fate of the 2,500-year-old Parthenon marble sculptures reportedly the only item on the agenda. Osborne and Mitsotakis then gave an address at the London School of Economics, during which Osborne admitted that the permament return of the marbles was “possible”.

Osborne said: “A win-win solution can be found that will result in the reunification of the Parthenon sculptures in Greece, while at the same time taking into account concerns that the British Museum may have.”

The negotiations were the latest in a series of secret discussions that have taken place over a period of months between Osborne and the British Museum and ministers serving in Mitsotakis’ administration, and follow a decision by the British Museum to lend the marbles to the new Acropolis Museum in Athens for a period of 10 years, according to Ta Nea, the Athens newspaper which broke the news. Sources told Ta Nea that the negotiations are now “at an advanced stage”. If the deal is finalised, the marbles are expected to be returned to Greece in early 2023, and will be displayed at the Acropolis Museum alongside other artefacts from the Parthenon.

The Parthenon Marbles, also known as the Elgin Marbles, were taken from the Parthenon in Athens by the British diplomat and ambassador to the Ottoman Empire, Thomas Bruce, 7th Earl of Elgin, in 1801. Elgin took the marbles to the UK with the permission of the Ottoman authorities who controlled Athens at the time, before being sold to the trustees of the British Museum in 1816.

The Greek government have since argued that this permission was not valid and that the marbles were taken without the consent of the Greek people. This has been disputed by the British government; in March 2021, the then Prime Minister Boris Johnson stated that the Parthenon Marbles “were legally acquired by Lord Elgin under the appropriate laws of the time”.

Supporters of the marbles’ return to Greece argue that the British Museum does not have the proper conditions to appropriately care for and preserve the marbles, which could be damaged by exposure to light, moisture and other environmental factors.

The British Museum has been plagued by construction issues in recent years and is scheduled to soon undergo a significant restoration. But advocates for the marbles’ transfer back to Greece believe they will be better protected and preserved in the new and custom-built Acropolis Museum in Athens.

For almost 40 years, the marbles have been the subject of a contentious dispute between the governments of the Greek and British people. The Greek government first made a formal request for the return of the sculptures in 1983.

If the marbles are returned to Athens, it would constitute as something of a volte-face for the former British Chancellor of the Exchequer, who used a speech at the British Museum’s annual trustees dinner on 2 November 2022 to advocate a ‘retain and explain’ position on the broad issue of restitution.

While saying that “long-term partnerships could be struck,” Osborne appeared to deny the prospect of the Parthenon Marbles or other artefacts the British Museum acquired during colonial rule being restituted to their original place of provenance.

Osborne said: ”We hear the voices calling for restitution. But creating this global British Museum was the dedicated work of many generations. Dismantling it must not become the careless act of a single generation.”

Want to Make Some Mind-Blowing AI Art at Home? DALL-E Is Now Freely Available to All Humans