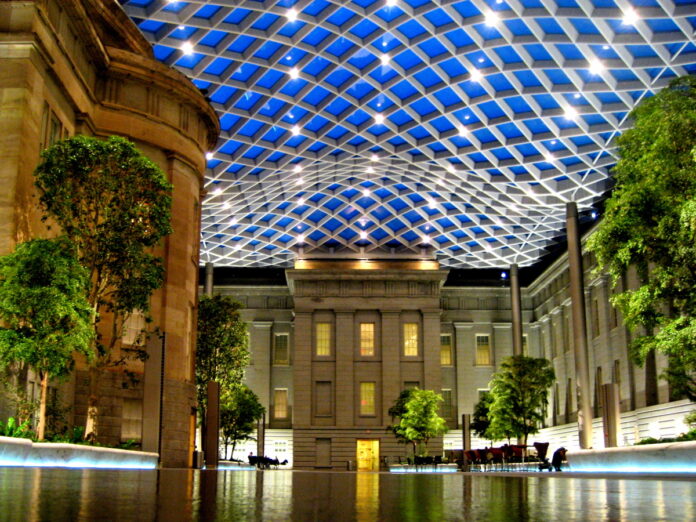 The collection of Smithsonian American Art Museum began modestly in 1829 when a Washingtonian named John Varden decided to set up a museum in the country’s capital for his collection of European art. The artwork was first placed in a room he added to his own home near the US Capitol.

In 1841, Varden’s collection was exhibited in the newly built Patent Office building – coincidentally, which today houses the museum. Along with Varden’s work, Varden himself came as the “curator” of the newly created “National Institute” of state art and historical objects.

Paintings and sculptures shared space in a large exhibition hall with the Declaration of Independence and Benjamin Franklin’s printing press. The establishment of the Smithsonian American art museum in 1846 overshadowed the prestige of the institute, which was later disbanded.

By 1858, most of the exhibits on display at the Patent Office had been moved a few blocks to the newly built Smithsonian Castle. The rest of the collection arrived in 1862. But the devastating fire of 1865 heightened the Smithsonian’s reluctance to create cultural collections.

Until the end of the century, most of the art was leased to the Library of Congress and the Corcoran Art Gallery. The turning point in the history of the Smithsonian American Art Museum collection came in 1906.

That year, the will of Harriet Lane Johnston, art collector and niece of President James Buchanan, forced a federal court to make an important decision: the recognition that the Smithsonian collection is the “National Gallery of Art.”

Today, the Smithsonian Institution is the world’s largest museum, educational, and research facility with 19 museums and the National Zoo, shaping the future by preserving heritage, discovering new knowledge, and sharing its resources with the world.

Smithsonian American Art Museum and its Renwick Gallery have taken a leading position in collecting the pieces of visual culture of America.

The Smithsonian American Art Museum is part of the Smithsonian Institution. It holds one of the largest collections of art, from the American colonial period to the present.

The museum has more than 7,000 artists represented in the collection. The museum’s main building is the old Patent Office Building, which it shares with the National Portrait Gallery. Craft-focused exhibitions are shown in the Renwick Gallery.

Skating in Central Park by Agnes Tate is a large festive scene of winter revelers in New York City’s Central Park. It depicts skaters and toboggans on a frozen lake and snow-covered park slopes.

Late in the evening, the sun sets over the Manhattan skyline. The contrasts between the snow and the dark branches of the bare trees are delightful.

“Buffalo Hunt on the Southwestern Prairies” by John Mix Stanley

Sadly, over 200 Stanley paintings held by the Smithsonian were lost in a fire in 1865. This significant loss of most of his work makes this portrayal of the American West very valuable.

“Surrender of a Confederate Soldier” by Julian Scott

Julian Scott’s Surrender of the Confederate Soldier shows a wounded Confederate soldier during the American Civil War waving the flag of surrender. The soldier is accompanied by a dark-skinned man, presumably the soldier’s slave, and a woman holding the infant, who is believed to be his wife and child.

The painting does not glorify war, but instead shows the suffering and loss of life associated with the war.

“Westward the Course of Empire Takes Its Way” by Emanuel Leutze

Westward, Empire’s Course Takes Its Own Path by Emanuel Leutse is a painted sketch of a massive painted mural currently on display behind the western staircase of the House of Representatives Hall in the US Capitol Building.

The picture shows a group of pioneers traveling west when they first saw the “Promised Land” of California.

The painting is one of several paintings by John Quidor based on scenes from Irving’s writing about Dutch New York.

“The Figurine” by William McGregor Paxton

“Figurine” by William McGregor Paxton depicts a maid carefully cleaning the glass, which contains a Chinese porcelain figurine. Next to the display window is a blue and white porcelain pot with gold trim. The painting was created in Boston and the pieces echo the region’s trade history with Asia. It also reflects the popularity of Asian decorative products in America in the early twentieth century.

Northern Lights by Frederick Edwin Church depicts the Northern Lights and Isaac Israel Hayes’ Arctic Expedition. The painting includes personal and nationalist symbolism and references. The mountain peak in the painting was named after Church during an important American Arctic expedition, represented by a dwarf ship. The details of the ship were taken from a sketch that Hayes brought back from the expedition.

Cologne Hands Back 92 Benin Bronzes to Nigeria, But a Few Will Remain in Germany on Long-Term Loan

Amid a Feverish Market for Her Prismatic Paintings, Japanese Art Dynamo Etsu Egami Is Keeping a Cool Head