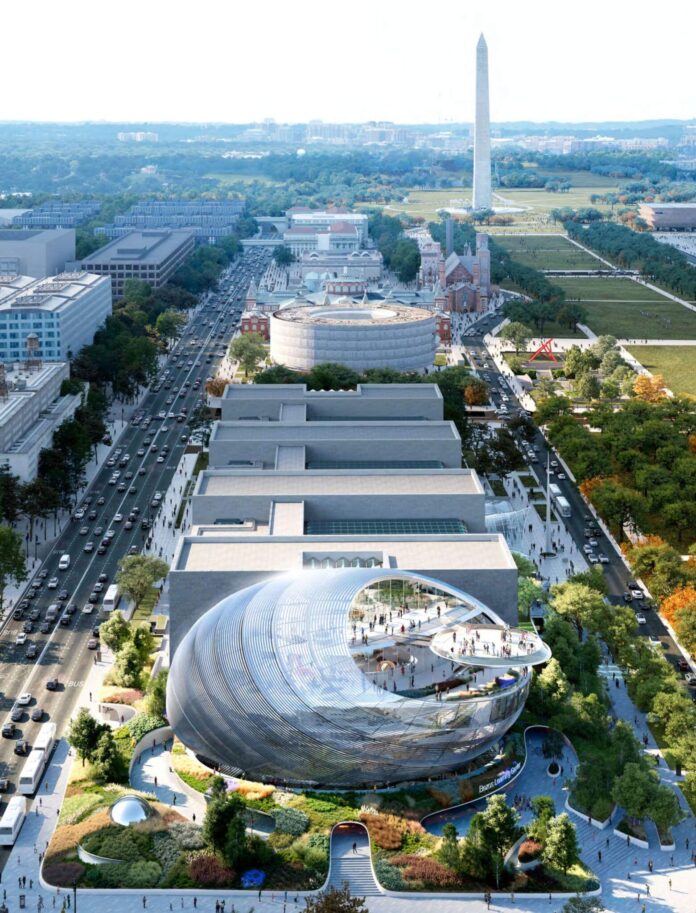 The Smithsonian’s National Air and Space Museum (NASM) in Washington, DC has revealed five design proposals for the $130m Bezos Learning Center, a project that will be realised with a $200m gift from the Amazon founder Jeff Bezos, the largest donation the Smithsonian Institution has received since its founding in 1846.

The museum is seeking public feedback on the aesthetic concept of the centre before announcing the winning firm in the coming months. The proposals from five anonymous firms can be reviewed until 19 September. The design is slated to be completed in 2023, with the building projected to be unveiled in 2026, coinciding with the 50th anniversary of the NASM.

The former site of a demolished glass-walled restaurant designed by the late architect Gyo Obata and his firm Hellmuth, Obata & Kassabaum (now known as HOK) in 1988 will be used for the new educational centre. The complex will span three floors and 50,000 sq. ft, including exhibition spaces, a restaurant, a rooftop terrace and an observatory.

Some of the proposals include a honeycomb-inspired structure with elements influenced by the International Space Station and James Webb Telescope; a bulbous dome reminiscent of rocket ships; and a design influenced by the spiraling patterns of the Milky Way.

The donation from Bezos, who founded the aerospace company Blue Origin in 2000, will also partially fund the ongoing refurbishment of the NASM, which holds the world’s largest collection of aviation and space artefacts.

“The Smithsonian plays a vital role in igniting the imaginations of our future builders and dreamers,” Bezos said in a previous statement regarding the project. “Every child is born with great potential, and it’s inspiration that unlocks that potential. My love affair with science, invention and space did that for me, and I hope this gift does that for others.”