Home News From a Dutch Golden Age still-life to a Nobel Prize medal: our... 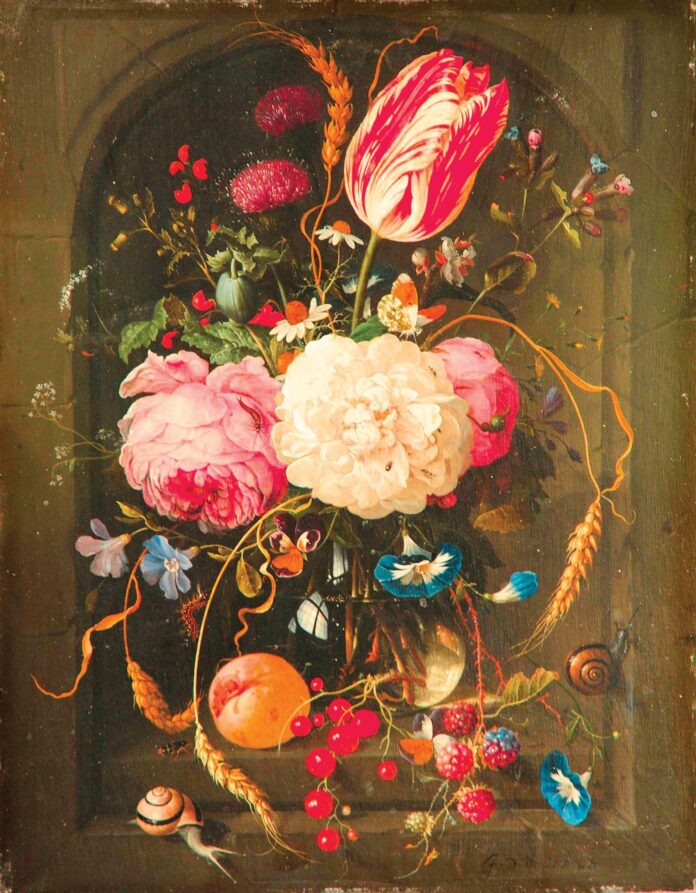 Jan Davidsz. de Heem, Still life of flowers in a glass vase in a stone niche, 1660

A clear draw for collectors of the Golden Age of Dutch and Flemish Old Masters, this intricate still-life is one of few works by Jan Davidsz. de Heem to come to market, as the majority of his oeuvre is now in private hands. With the period’s revered tulip taking pride of place within the composition, this small-scale panel is one of 16 works being sold from the collection of the late Juan Manuel Grasset—a Madrid-based civil engineer with an established eye for works of the period. “It was painted in the late 1660s when De Heem’s art had reached a point of fulfilled accomplishment after quite a long career and decades of development. At this stage in his life he certainly had no need to show off, and perhaps that is why this painting, a work of remarkable refinement, feels so effortless,” says George Gordon, the co-chairman of Old Master paintings at Sotheby’s.

This early work by the key Modernist Ferdinand Hodler is thought to have been created during the artist’s visit to Oscar Miller, the 19th-century paper mill owner and key Swiss art collector. Artists whose work Miller bought included Hans Berger, Frank Buchser and Ernst Ludwig Kirchner. He is believed to have acquired around 20 works by Hodler, with this example being in private hands since 2012. “Our current volatile times make this art era once again very attractive to collectors, especially when blue chips like this piece by Hodler are offered,” says Sebastian Neußer, the senior director at Ketterer Kunst. “I am convinced that we will see some amazing prices in our December sale when, next to Hodler, part two of the Gerlinger collection [of German Expressionist art] will be on offer.”

The artist behind this sumptuous Madonna, known as Barnaba da Modena, is recognised for the Emilian influences in his Byzantine style and for being active across Genoa, Lombardy and Pisa in the mid-14th century. London’s National Gallery holds examples of his work. This piece arrives from the Thyssen-Bornemisza Collection (alongside three other Renaissance works). “This is an exceptional, signed panel from a master whose work rarely appears on the market,” says Eugene Pooley, a specialist in Old Master paintings at Christie’s, London. “The cloth of honour behind the Madonna is exquisitely painted, with the fine detail of the brocade pattern beautifully worked.”

The first American to win the Sveriges Riksbank Prize in Economic Sciences in Memory of Alfred Nobel, Paul A. Samuelson (1915-2009) is perhaps better known for the publication of his influential textbooks (exploring Keynesian economics) and his role as adviser to the former US presidents John F. Kennedy and Lyndon B. Johnson. Samuelson’s family are now offering the prize for sale. “From a numismatics perspective, the economics prize is a different design and different fabrication than other Nobel prizes,” says Joshua Benesh, Heritage Auctions’s chief strategy officer. “More importantly, it stands for a lasting contribution to humanity. The market for Nobels is as diverse and varied as the recipients of the prize.” Last summer Russian journalist Dmitry Muratov’s 2021 Nobel Peace Prize was sold at auction for $103.5m (with proceeds benefitting Ukrainian child refugees).

This striking work was created by the German-born artist Ludwig Hirschfeld-Mack, who escaped Nazi Germany only to be interned in camps in New South Wales and Victoria in Australia (via the Huyton internment camp near Liverpool, England), before becoming a grammar school art teacher in 1942. His vessel to Australia, the HMT Dunera, was filled with professionals and echoes the route taken by Henry Talbot, Erwin Fabian and the founders of Fler furniture. This work reflects his time with the Bauhaus and joins the auction with 14 other pieces by the artist, including a collection of drawings that serve as a record of his life at the camps, all consigned by a family member.