Home News Step Inside Anna Park’s Bushwick Studio, Where She Creates Portraits of Her... 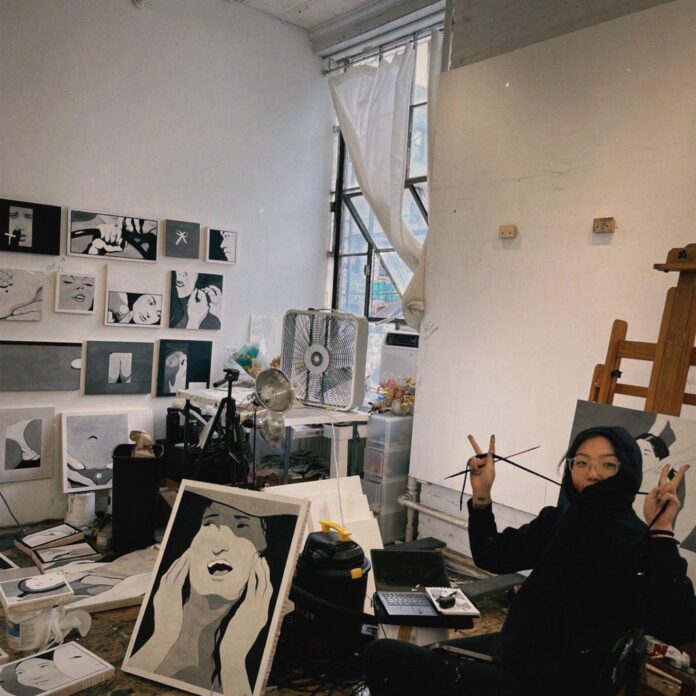 Anna Park puts in 13-hour shifts in her studio when preparing for a show. She works alone, fueled mostly by cigarettes and Diet Coke. But you have to be willing to put in the hours to maintain the kind of success she has enjoyed this early in her career.

Born in South Korea in 1996, Park was raised in Salt Lake City, Utah, but is now based in New York. Her star has had a rapid ascent since she graduated from art school in 2020, with galleries recognizing her talent early on—identifying something unique in her frenetic, semi-abstract work. Her profile received a fortuitous publicity boost after KAWS shared her work online, and her debut solo show in 2021 at New York’s Half Gallery sold out, with four works going to museums.

The artist is currently enjoying her L.A. debut, “Mirror Shy,” at Blum & Poe’s space in the city. It is her second exhibition with the gallery and coincides with her first solo museum exhibition at SCAD Museum of Art in Savannah, Georgia, where a series of chaotic, large-scale charcoal drawings are on view through January 3, 2023.

We caught up with the artist at her studio as she was preparing for the exhibition, which includes a new series of works on paper and panel depicting her alter ego in portraits that are more pared down than her earlier work. Inspired by the vernacular of film and advertising, these new works unpack cultural perceptions of the body with dark and surreal humor. 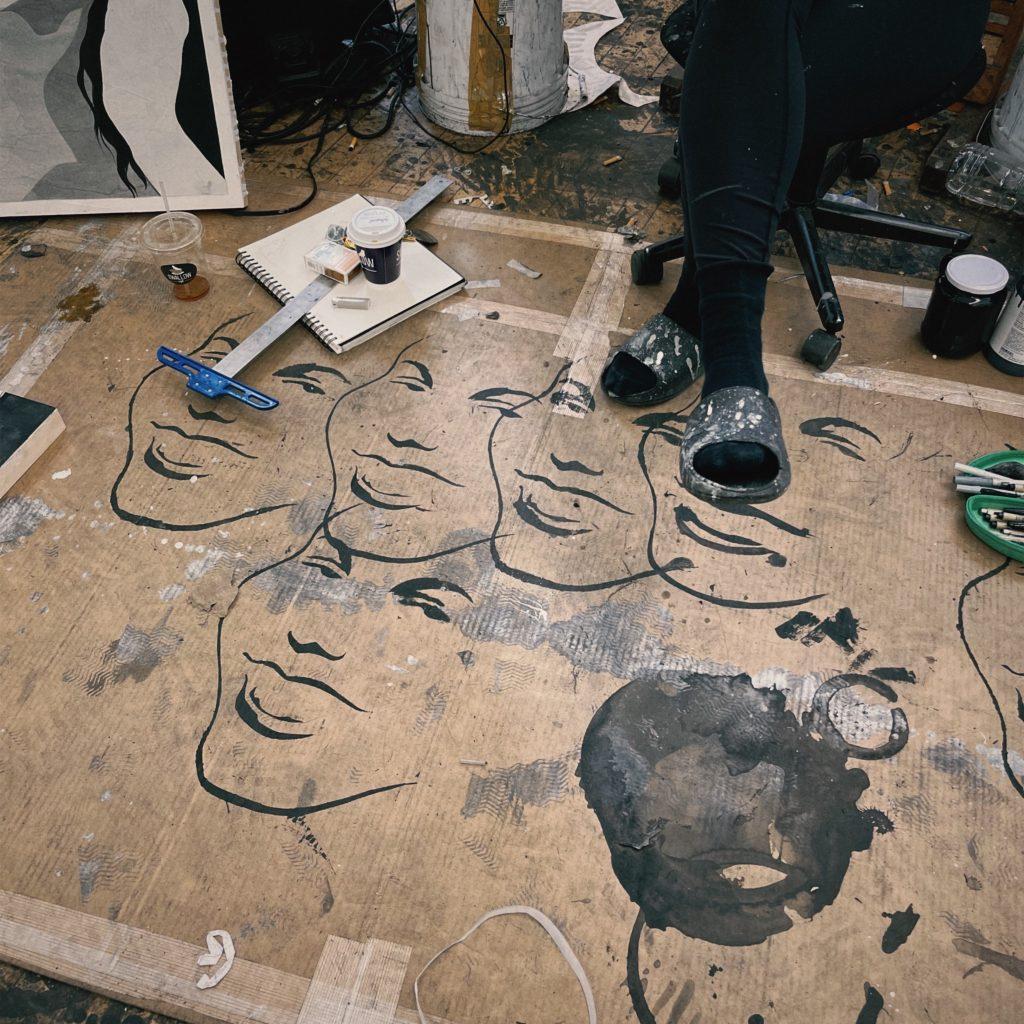 My studio is located in Bushwick, New York. Two years ago, my old studio flooded so I kind of found this space by chance. It’s in a building where a lot of my friends have studios, so it’s been nice to have a sense of community in the area.

For the first 15 to 30 minutes or so I just sit. I decide what podcasts or radio [programs] to put on for the day, and that gives me a chance to plan out the day ahead of me. It also gives me a fresh eye to look at work I had left the night before, so I can make mental notes of what to do next.

As of right now, I don’t have any studio assistants working with me. Partially because I’m a pretty private person, and I frankly wouldn’t know if I would have anything for them to do.

I just finished up my show which is now on view at Blum & Poe Los Angeles, so the studio looks a bit bare at the moment. It’s always a strange feeling to see it so empty after living with the work for the past year or so. I took some time to travel, finally, in the past few weeks and have been getting excited to get back into things.

Show us a few different iPhone photos of a work in progress [or photos of different works in various states of completion] in a way that you think will provide insight into your process. 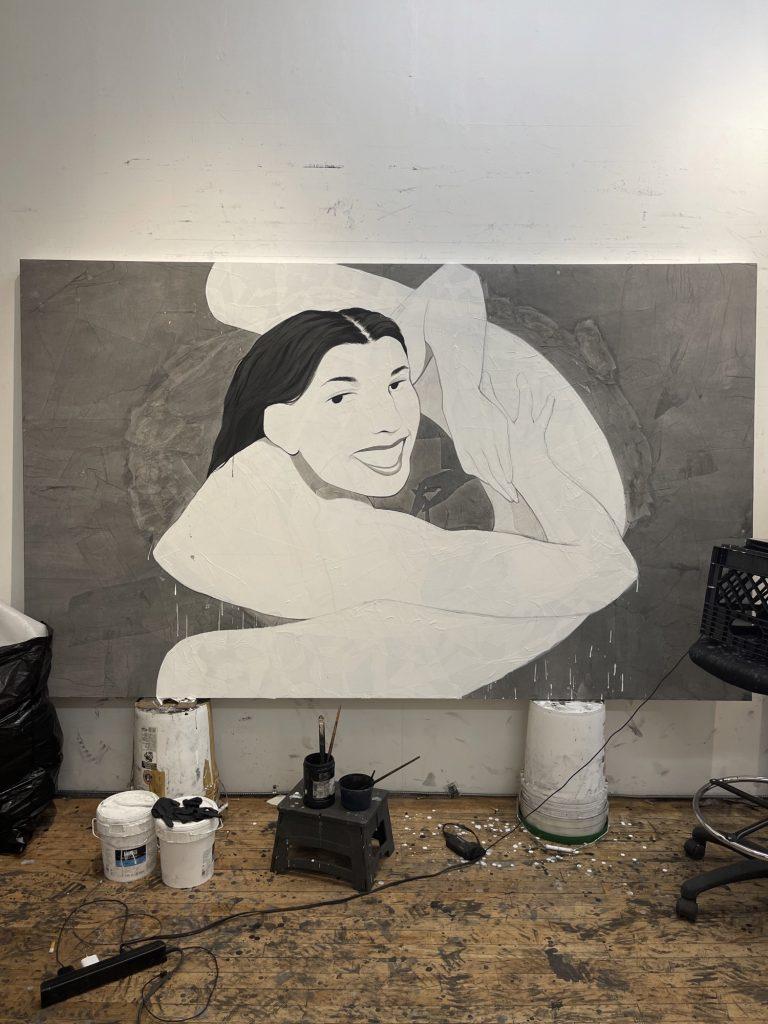 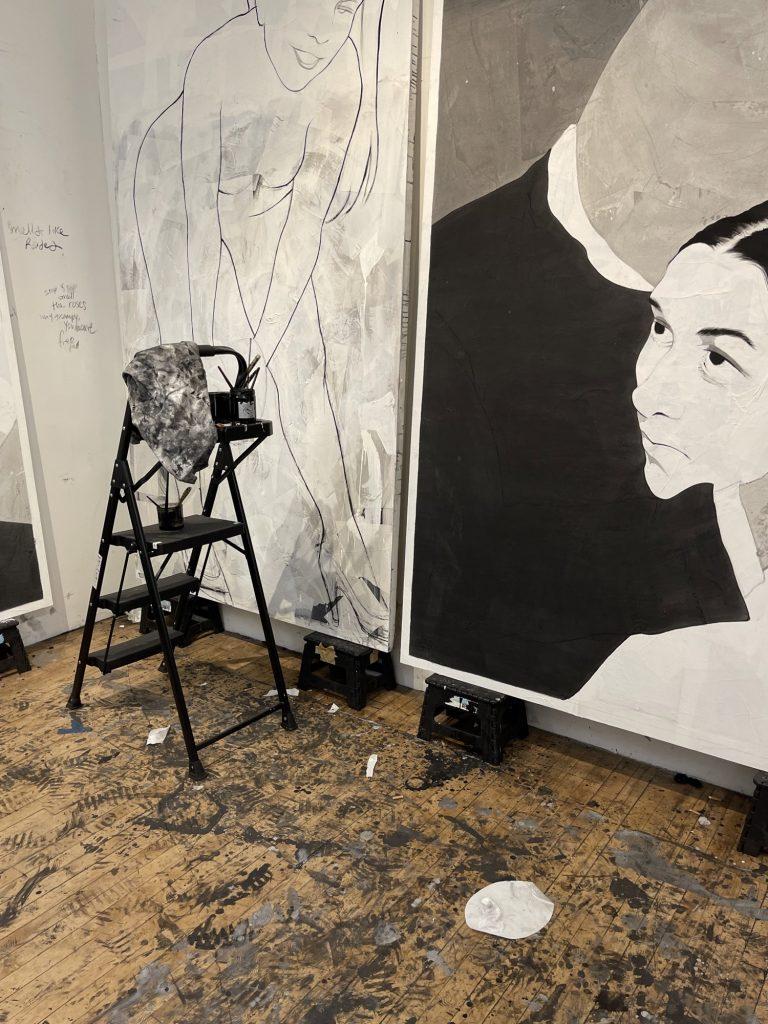 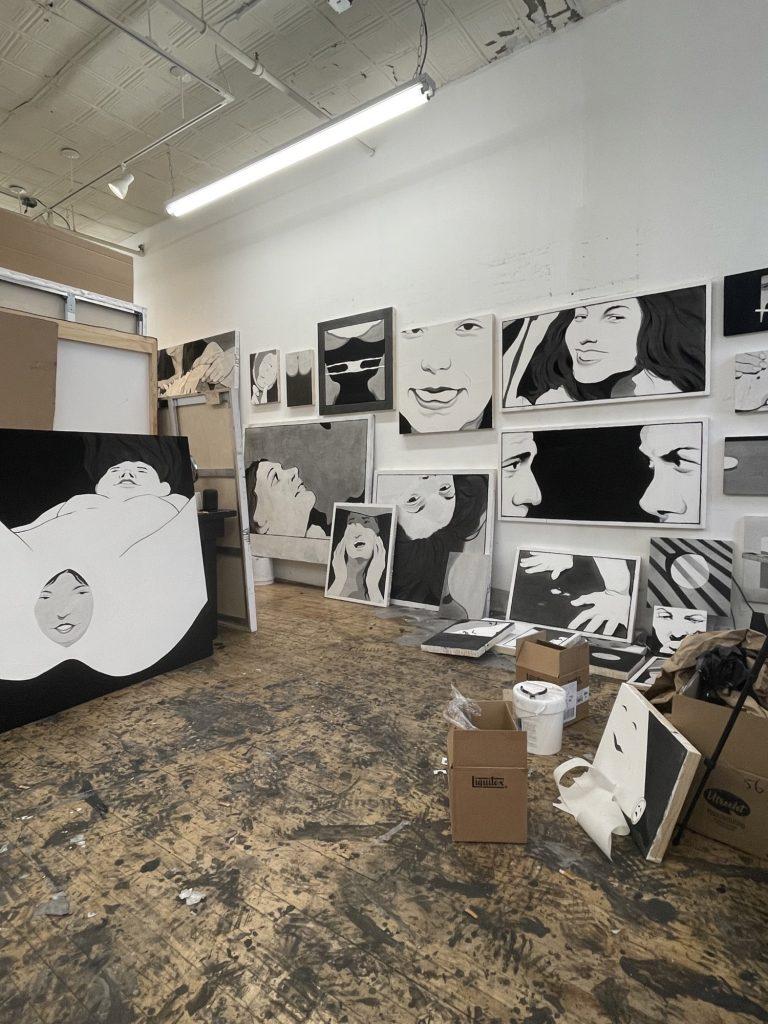 Is there anything you like to listen to/watch/read/look at etc. while in the studio for inspiration or as ambient culture?

I usually have podcasts or T.V. shows on in the background. I’ve found playing music makes my mind wander too much so having some dialogue in the background helps to preoccupy a part of my brain while working. Lately, I’ve been really into listening to stand-up comedy and comedy podcasts. And my ritual for the last few weeks of preparing for a show has been to listen to all of . I never figured out why—maybe the wholesome nature of the show calms me down for the last stretch before deadlines.

How do you know when an artwork you are working on is a dud?

When I realize there is no point of return. It’s kind of like if you are on a date with someone and you know there won’t be a second. It’s just not working and you have to say your goodbyes.

What is the fanciest thing in your studio?

Probably my air conditioner? I’ve found all my studio furniture on the side of the road. My friends think it’s gross (especially my couch), but I figure it’s going to be covered in charcoal and paint anyways. 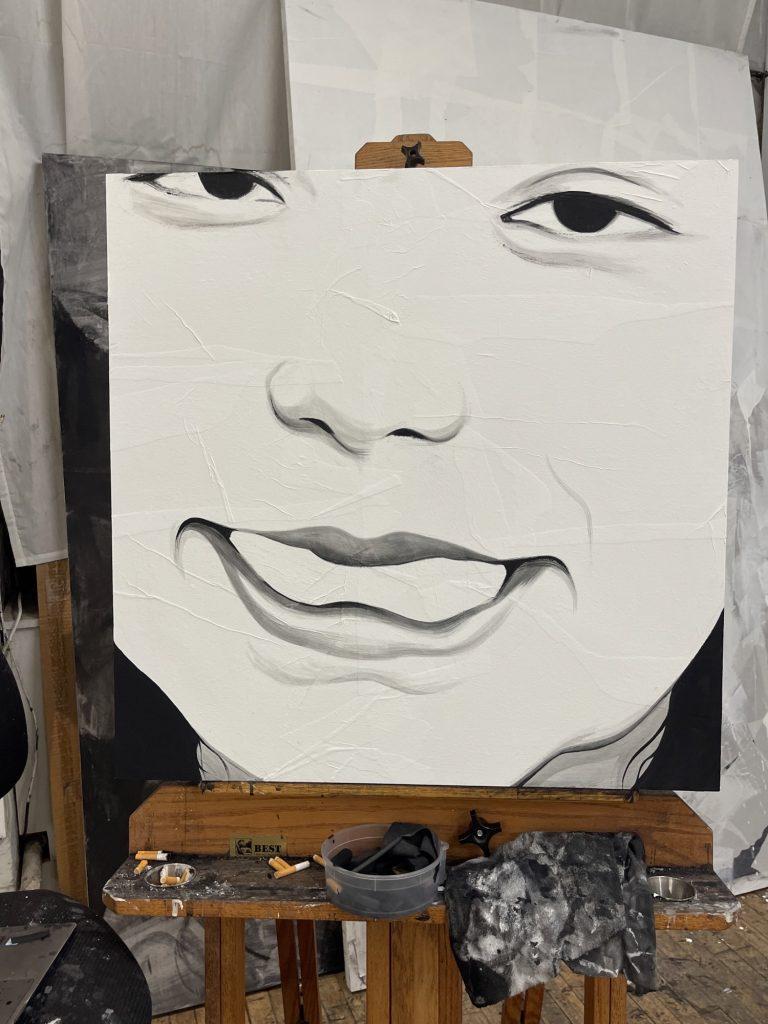 Is there anything in your studio that a visitor might find surprising?

I’m not sure about surprising, but visitors are always amused by the giant mounds of cigarette butts that are overflowing from Diet Coke cans in different parts of my studio.

I don’t really have a solution to feel unstuck—sometimes I just spiral for a while. I’ve found that I just have to work through it and hope to resolve it. If that’s really not working, going to see art always helps me get out of a rut. It’s my form of therapy and inspiration. 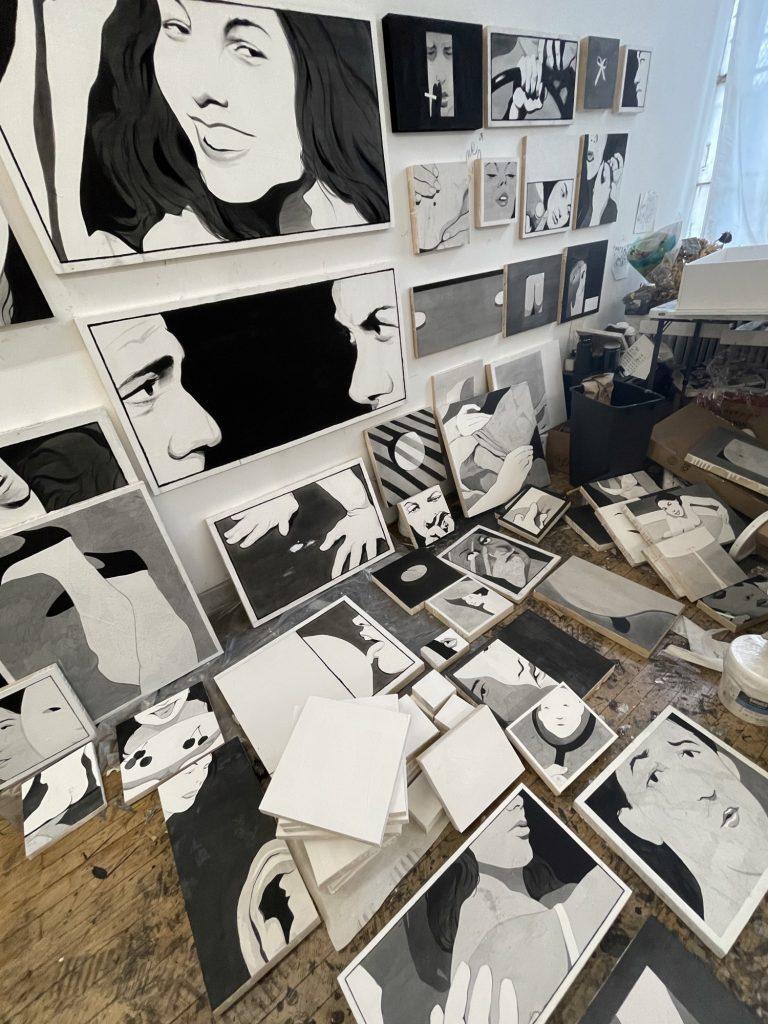 Where do you get your food from/what do you eat when you get hungry in the studio?

Do Diet Coke and cigarettes count? Oh, and a lot of gummies. I try to keep it balanced.

What do you like to do after you leave the studio at the end of the day?

I usually make dinner and watch something to wind down at the end of the day. An indulgence of mine is garbage reality television, I think sometimes I need to turn my brain off after a day at the studio.