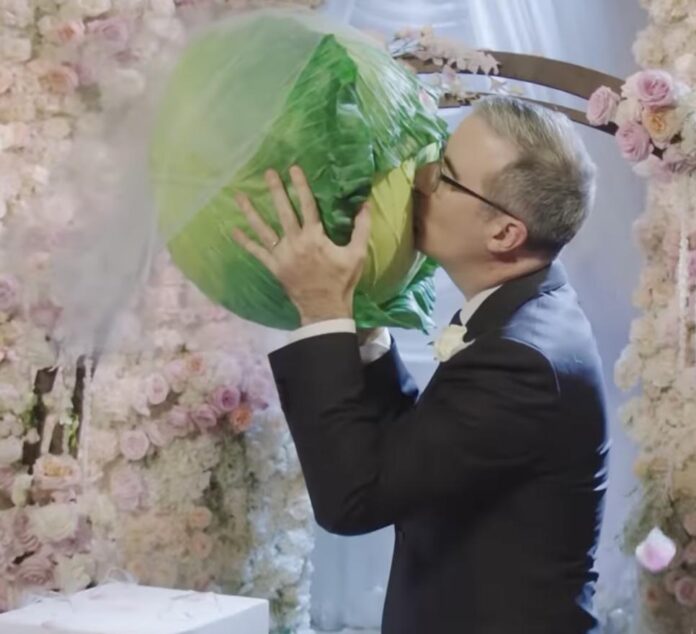 In the segment, Oliver explained how neural networks like Open AI’s DALL-E create images from increasingly complex (and absurd) text inputs provided by users. Since its April 2022 release, however, the updated DALL-E 2 has been deemed too powerful for the public, posing dangers like deepfakes, and is accessible by invite only.

While Open AI is researching responsible public deployment for the platform, Oliver and his show’s team took to Midjourney, one of many public-access A.I.s that have popped up recently, to demonstrate the power of the text-to-image phenomenon. And in the show’s consummately absurd fashion, they did this by envisioning a new Marvel protagonist named Roast Beef Superhero.

Oliver and the team also nosed around Midjourney’s Discord chat server, discovering the digital chimeras created by users since beta testing opened at the end of July, such as a “frog bumblebee” and “goose pilates.”

Then, Oliver recounted, a team member from the show named Julia made a “fateful decision,” searching the server for late night talk show hosts who’d been reinvented using the Midjourney A.I. Stephen Colbert turned up eight results, while Trevor Noah and Jimmy Kimmel only had three apiece. John Oliver, however, resulted in 493 separate A.I.-made images.

Daring to explore further to see the kinds of activities users envisioned Oliver engaging in, they discovered queries like “John Oliver bursting out of a can of Del Monte green beans” and “John Oliver commanding a hoard of elves to charge a potato.”

“All of these deserve to be in the Louvre,” the comedian deadpanned. While that has yet to happen, A.I.-generated art has sold for hundreds of thousands at auction, so perhaps we only need to wait for some forward-thinking collector to make a gift to the institution. They would, after all, have a wealth of options to choose from.

As it turns out, one Midjourney user named “postpoopzoomies” is behind an oversized proportion of these imagined realities, including “John Oliver is an egg with a bad attitude so don’t mess with him or he will do to you what he did to Humpty Dumpty.”

“I got high and blasted a million John Olivers,” postpoopzoomies posted on Midjourney’s Discord to explain his rush of creative output.

The plot further thickened with an unexpected narrative thread that introduced Oliver to the hurdles still facing A.I. Apparently, postpoopzoomies teamed up with a user named Margaret to imagine a nine-part saga where Oliver starts growing cabbages in his apartment and throws them at children. In the tale, Oliver has a change of heart and actually marries the cruciferous vegetable.

“It’s at this point that the A.I., for the very first time, seems to struggle with a prompt,” Oliver said. “Because that seems to be an image of me getting married to myself, and the cabbage somehow being there as a witness.”

So, the talk show host invited Steve Buscemi to officiate and offer the story a proper denouement, tying the knot with the cabbage before a live studio audience. (No word yet on how Oliver’s wife, an Iraq War veteran and Army medic, took the news.) Sometimes, real life can be just as bizarre as a machine-learning fever dream.