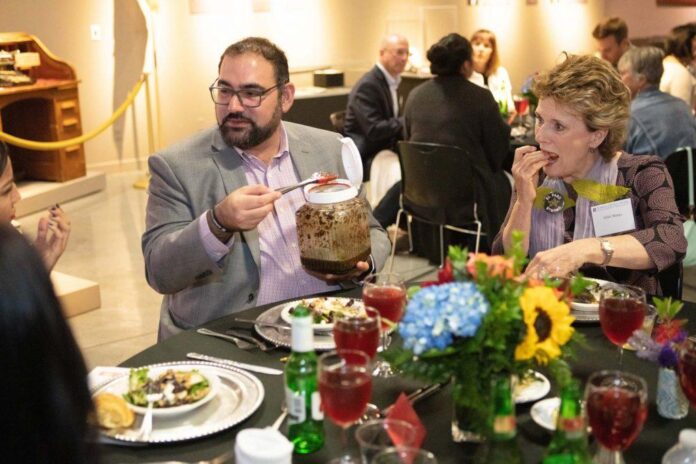 America, it’s time we had a talk. In the lead up to the mid-term elections in the U.S., political discourse has become more polarized than ever. And with the aim of finding some common ground, the artist Philippa Pham Hughes is organzing a dinner this evening at the University of Michigan Museum of Art (UMMA) in Ann Arbor, where guests from both sides of the political aisle will sit down with each other to hash things out.

“I often say communication is a muscle you have to build with practice, because what I’ve learned is people are pretty shitty communicators,” Hughes says. “They think they’re very good at having a conversation because they’re talking a lot, but they’re really not communicating.”

The Washington, D.C.-based “social sculptor,” as Hughes describes her practice, has been bringing folks together to improve those skills since 2016, when she held her first cross-party dinner in her own home right after the election, with just a handful of people invited. Her goal then was to better understand Trump voters, who seemed so diametrically opposed to her own progressive political and social leanings. But the project branched out to encompass larger groups at public venues, including the Phillips Collection, and in cities across the country, from Anchorage, Alaska, to El Paso, Texas, to Sioux City, Iowa.

The dinner at the UMMA, casually titled “Hey, We Need To Talk,” is the largest yet, involving around 120 strangers who will sit down and break bread—and hopefully not throw any rolls, or punches.

“There have been a couple times when things got sort of heated,” Hughes said of past dinners. “But by a certain point, I’ve led them through such a ritual, that I think [the participants] have naturally figured out how to diffuse things.”

To aid in keeping the conversation civil, Hughes has set up ice breakers to keep the dialogue open and prompt guests to look for similarities rather than difference. She is even considering giving everyone a buzzer or squeaky toy to squeeze when the talk veers into uncomfortable territory.

“It’s a fun, delightful way to kind of ease into this heaviness of ‘We’re having a cross-political conversation.’”

The main topic of discussion at the UMMA will be: “What does it mean to be an American right now?” The project is part of the museum’s overall efforts to get the public engaged in the mid-term elections. As well as serving as a voter registration site up through the Michigan elections on November 8, the museum hosted a “Feel Good Friday” event last month that included several installations by local artists tied to the elections, and experts on hand that spoke about ballot issues. 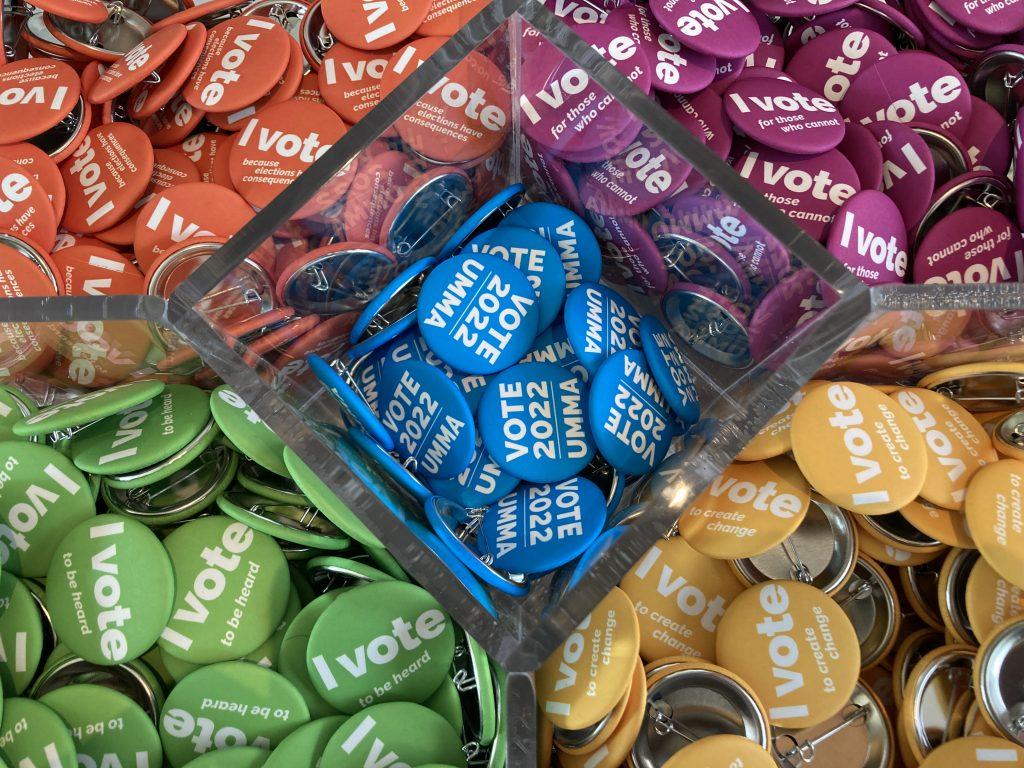 Hughes’s project is part of the museum’s overall efforts to get the public engaged in the mid-term elections. Courtesy of the Creative Campus Voting Project.

Recruiting people to take part in these conversations has been easier than one might think considering how often people have stopped talking to friends and relatives after a contentious Thanksgiving dinner.

“It is easier to talk to strangers. You have less to lose in a way and so it’s just more easy going,” Hughes said, “You know my mom is a very solid Trump voter, she’s as Trumpy as they get, and I haven’t learned how to talk to her, but that’s because we have other dynamics going on.”

Still, it’s easier to find eager participants from the left side of the political spectrum than the right, Hughes conceded, where people seem more skeptical about her intentions. “It’s been a real challenge, since we have become more polarized. There’s no question about that,” Hughes said.

Convincing community leaders that she is genuinely seeking to build bridges rather than promote one side or another has helped.

The connections people find during the dinners—where overt political affiliations are hidden and the only signal that your neighbor might share your beliefs is whether they are wearing a burger or a beer badge—is another measure of success for Hughes.

“One of my greatest victories was at this dinner in northwest Arkansas when a liberal woman complained to me after in an email that there were no Republicans at her table,” the artist said. “So we went back and looked and, yes, there were. I said, ‘Well, maybe everybody just actually agrees more than you think.’”

And once she gets people in the same room, she finds everyone gets excited about having a chance to speak openly. “I think people want this desperately,” Hughes said.