Home News The Back Room: Beyond Imagination 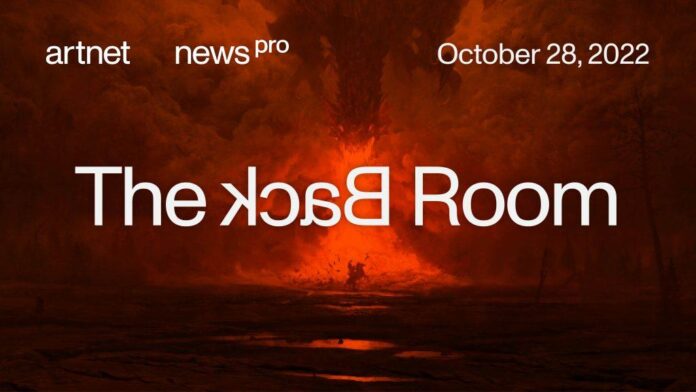 This week in the Back Room: A.I. upending the art-making business, a new Castelli to know, an antiquities reckoning, and much more—all in a 6-minute read (1,692 words). 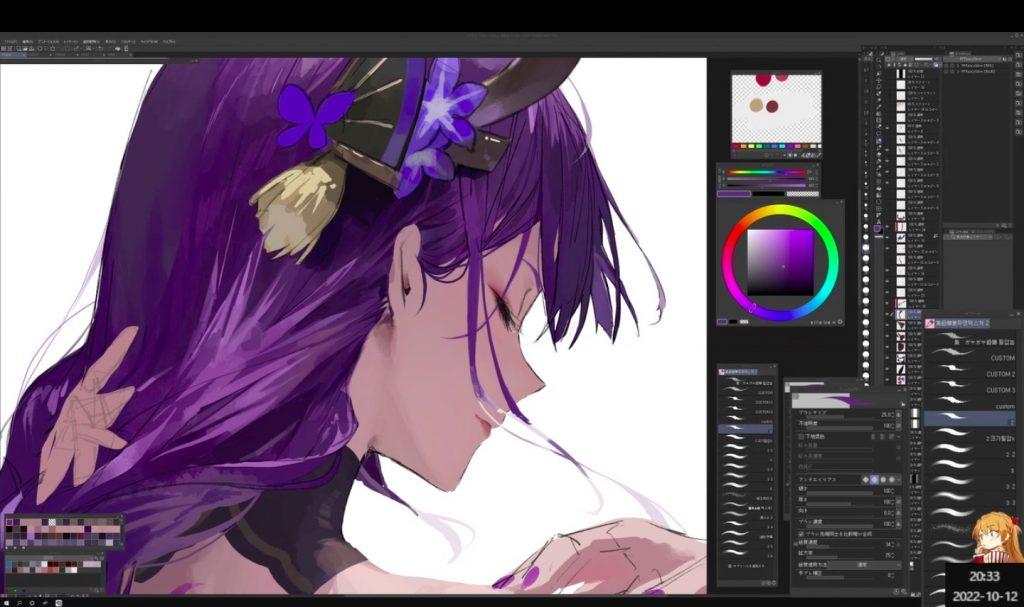 Screenshot of a Twitch stream by @ato1004fd from October 12, 2022, showing the artist Drawing a character from the video game .

A recent scandal in the realm of video-game fanart showed that A.I.-driven image generators like DALL-E, Midjourney, and Stable Diffusion are raising existential questions about the careers of illustrators and commercial artists.

But it also revealed why the art establishment should prepare to deal with some of the same ruptures sooner than later—or risk losing ground that can’t be made up.

Earlier this month, a popular Korean-language artist who goes by @ato1004fd on the live-streaming platform Twitch broadcast an 11-hour studio session working up an original depiction of a character from the video game .

“But by the time @ato1004fd had completed the digital painting,” Zachary Small wrote, “a rogue viewer had already grabbed a picture of the work in process from the stream, used A.I. to ‘complete’ it, and posted their own version to social media—before turning around and accusing @ato1004fd of being the copycat.”

The troublemaker’s tool of choice was NovelAI, a monthly subscription service offering algorithm-assisted content production. The program includes an “image to image” function that allows users to upload visuals for A.I. augmentation, as well as refine the machine’s output via text. (DALL-E and its competitors only generate images through text prompts.)

A Twitter backlash turned the tables on the impostor, eventually leading them to delete their account. But while @ato1004fd’s fans successfully defended the artist’s honor, the saga nevertheless opens the door to much bigger challenges in the business of art-making.

Why Should Artists and Galleries Care?

After years in development, A.I.-driven image generators have made a quantum leap in quality, speed, and affordability in 2022. Thanks to these tools, it has never been easier, faster, or cheaper to produce professional-looking visuals of anything a person could dream up, even if they have no artistic training whatsoever.

The result ratchets up the pressure on living artists-for-hire. Wages among illustrators “have been decreasing for years,” according to Liz DiFiore, the president of the Graphic Artists Guild, largely because of a growth in copyright infringement.

Meanwhile, A.I.-driven image generators learn to create visuals by studying databases made up of billions of images scraped from the internet. While internal checks allegedly prevent them from appropriating celebrities, politicians, and other public figures, few (if any) artists enjoy this protection.

Stranger still is the case of Greg Rutkowski, a giant among fans of fantasy art and gaming. His name is one of the most popular prompts on A.I. image generators today—so popular that people have begun mistaking the algorithms’ output for Rutkowski’s own.

The companies behind these vast databases believe they have no obligation to notify the subjects or makers of the included images because the information is largely considered public domain. So most artists are unaware that their oeuvres are even housed in these databases.

But a few know, and they’re not taking it lightly.

What Kinds of Pushback Are We Seeing?

The bad news: “Legal experts believe that artists, illustrators, and galleries looking to challenge A.I. image generators would have an uphill battle in court,” Zachary wrote.

Why? There is little precedent so far for asserting infringement by algorithms. In large part, this is because an artist’s  is not considered copyrightable—and style is essentially what the software is analyzing and adapting.

Although major galleries are typically bulldogs about defending their artists’ rights, there is little indication so far that they have strategies in place to deal with A.I. image generation, either. Reps from Pace Gallery, Gagosian, and Sprüth Magers declined to comment on the matter.

The good news: a handful of alternate solutions are attracting interest. The artists Mat Dryhurst and Holly Herndon recently launched Spawning, a tool intended to allow people to set permissions on how their style and likeness can be used by the machines.

Commercial artists have also turned to trade organizations for help lobbying the tech companies behind A.I. image generators. DiFiore said that the Graphic Artists Guild has experienced a membership surge in recent weeks, with multiple new members citing concerns over A.I. as their primary motivator. Never underestimate the power of solidarity.

Rutkowski, for one, is unequivocal about the path forward: A.I. image generators should exclude the work of all living artists, he said. Barring such a seismic shift, Dryhurst believes the work of human illustrators will be fully automated “in the next couple years.”

Yet other stakeholders in the arts balance concern about algorithmic tools with hope that they can still be a force for good. DiFiore sees them as valuable ways to optimize the creative process. A.I. could do much of the grunt work, giving human artists of all stripes more time and energy to focus on aspects of the craft where machines are inferior, if not hopeless. Others, like artist Agnieszka Pilat, are evangelizing for the technology even more heartily.

One thing is for sure, though: whatever happens next will depend on how much of the art community understands and engages with A.I.’s potential impact. If the disconnect between graphic and fine artists continues, neither side may like where it ends up.

“I think that [Steinhardt] represents, and so do many people, a world that existed in the 19th century… I think we’re seeing the last gasps of that mentality.”

—New York assistant district attorney Matthew Bogdanos on financier and collector Michael Steinhardt, who relinquished 180 objects worth an estimated $70 million last year after a sweeping investigation into his links to looted works. As part of a settlement, Steinhardt avoided criminal charges but accepted a lifetime ban on acquiring antiquities. () 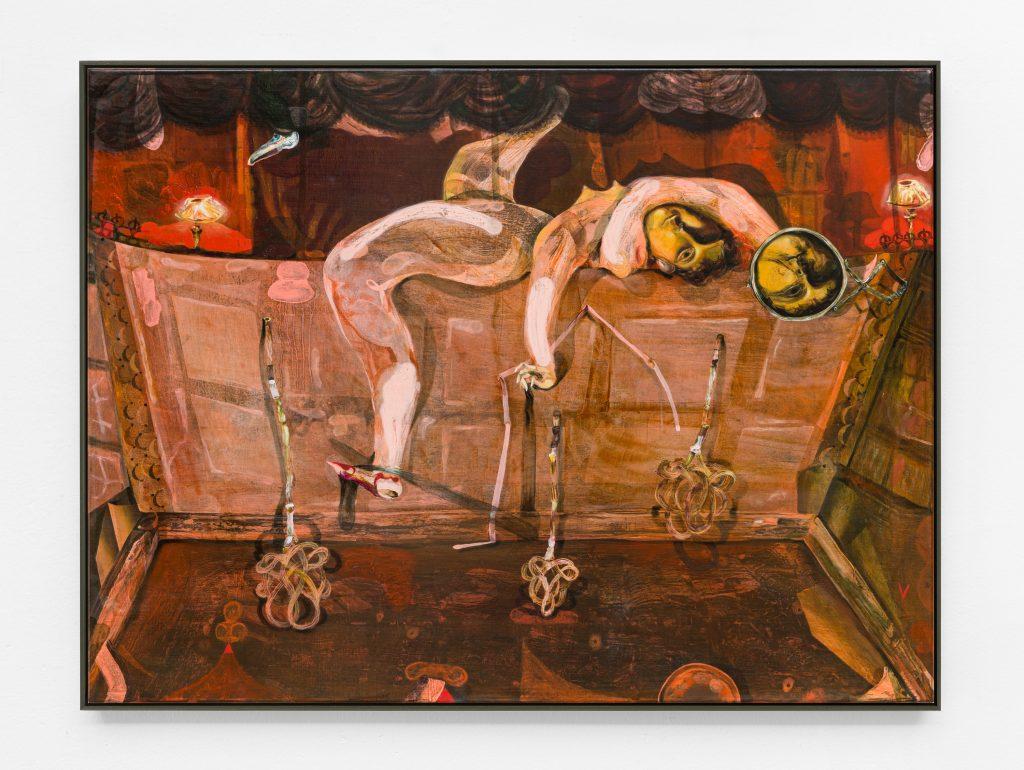 If you haven’t heard of Guglielmo Castelli yet, it might be time to get familiar. Mendes Wood DM sold out its solo presentation of the Turin-based artist’s work at Paris+ last week, even after being extremely choosy about placing works with institutions, per a gallery spokesperson. His prices still have plenty of room to rise, too.

After beginning his career in theater, Castelli has found an art-world audience by painting figures twisting, stretching, or tumbling down to earth. His subjects—which he prefers to call “actors” or “characters”—are often depicted inside defined spaces: on stage, in vitrines, even hiding in closets. , featuring a broken marionette-like figure splayed across a red-lit stage set, is a prototypical example.

New works by Castelli, a fan favorite since a sold-out show at Mendes Wood DM’s Brussels space last year, begin at $20,000 and stay south of six figures. He is currently enjoying a solo exhibition at the gallery’s recently opened New York outpost, and a new monograph is in progress. Acquiring institutions already include the Castello di Rivoli in Turin, the Blenheim Art Foundation in the U.K., and the Samdani Art Foundation in Bangladesh.

Would it be possible to script a better start? Sure, it just wouldn’t be all that believable.