Home News Artist Bone Tan Jones on how a six-day walk from London to... 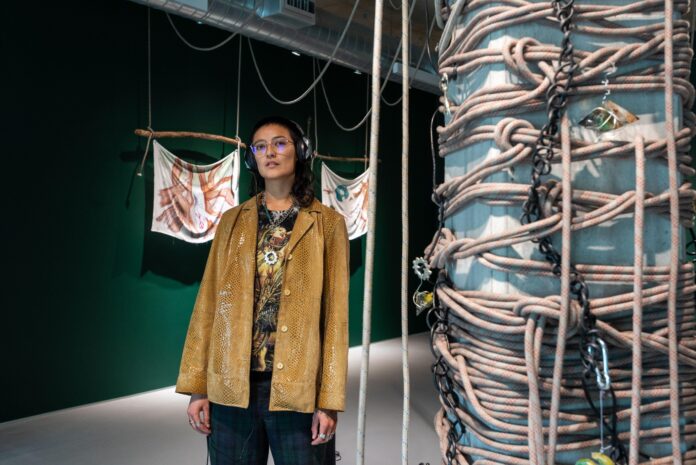 A new project at Queercircle space in Greenwich, south London, chronicles an important pilgrimage made across England. The artist Bones Tan Jones recently embarked on a six-day journey from Silvertown Tunnel, which is under construction under the River Thames, to Stonehenge. The exhibition Tunnel Visions (until 21 December) charts the pilgrimage, exploring ancient ley lines, the threat of pollution and the onslaught of urbanisation. The centrepiece is a four-metre-high, central monolith crafted from clay, electrical cabling and tree-climbing rope inspired by a 2,500-year-old Anckerwycke Yew tree that Tan Jones encountered on her travels. We asked the artist how their experiences shaped the show.

The Art Newspaper: Is the work a protest piece about fracking?

Bones Tan Jones: Tunnel Visions is a site-specific exhibition shining a light on the unnecessary tunnels being built at Silvertown/Greenwich and Stonehenge. The Silvertown tunnel being drilled underneath Queercircle from Greenwich to Newham—two of the UK’s most polluted boroughs—will create more traffic and more pollution in places where children’s lungs are already smaller than the lung sizes of children in more affluent areas. The tunnel under Stonehenge would do the same, not only that but it is desecrating a sacred site [the UK government plans to build a two-mile tunnel close to the ancient site though this is yet to be finalised].

It’s not just the stones that hold power, but the land around the stones that are sacred too. Though the work is not directly about fracking, it’s important that we see these tools of destruction as connected and recognise the impact they have on the health of humans and the Earth.

What was the most enlightening part of the pilgrimage to Stonehenge? And the most disturbing?

I found that the power of song was my most potent fuel. When I was feeling low—in energy, strength and motivation—singing old folk songs or making up my own improvised songs, helped me get to my destination, lifted my spirits and connected me to the land.

On day three I wanted to camp at an Iron Age long barrow in Chobham Common. I was turned away multiple times by security guards “protecting” private land. When I finally reached it I discovered the Long Narrow, an ancient burial mound, had been turned into an ESSO gas pipeline. Above it ran electricity pylons and the crackle of the electricity was so loud I could hear it through the bird song. As my favourite folk song goes: “No man has the right to own mountains. Any more than the deep ocean bed” (The Manchester Rambler by Ewan MacColl).

The installation will become a community-led campaign space during the exhibition?

Tunnel Visions is a generative project. Just as my pilgrimage was a catalyst for conversations and creation, so too will the exhibition. Though digging at the Silvertown Tunnel has begun, there is still an opportunity to stop it being used for cars and heavy goods vehicles, so Queercircle are collaborating with Stop the Silvertown Coalition on a series of workshops and events to amplify their campaign and empower local people to take action; from campaign and awareness raising to a project to imagine creative alternative uses for the tunnel with local schools.