Home News The Curators Behind This Year’s Polarizing Documenta and ‘Unions’ Top This Year’s... 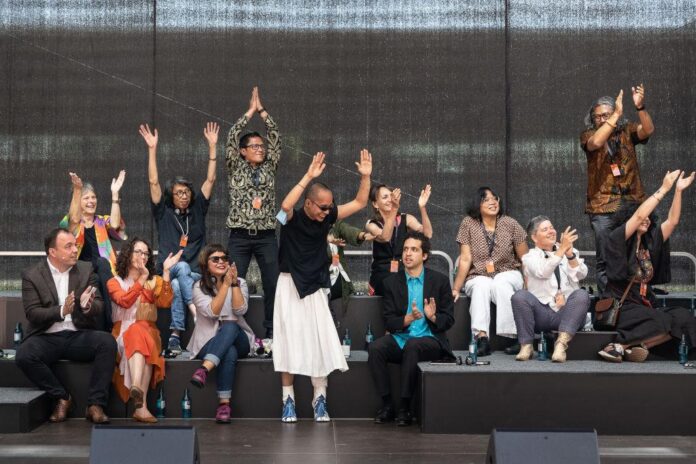 The Indonesian collective ruangrupa has come in at the top of ’s latest Power 100 list, followed in second place by Cecilia Alemani. Both held curatorial roles at two of the art world’s biggest events in 2022, Documenta 15 and the 59th Venice Biennale, respectively.

“Ruangrupa broke with old models by creating a sprawling exhibition that highlighted collective rather than individual practice, proposed networking as an essential part of the art world and introduced a more open-source approach to art making,” according to .

The choice suggests a return to convention after the headline-grabbing decision to put a “non-human entity”—ERC-721, the protocol used by most NFTs—in last year’s top spot. The ensuing crypto crash has quickly toppled the token, which did not make the 2022 list at all.

The social justice movements Black Lives Matter and #MeToo were also named on the 2020 list, in first and fourth place, respectively, but did not make the cut this year. Instead, “unions” may be an unexpected entry in third place this year, a position that presumably reflects their growing popularity among museum workers and a widespread renewed focus on labor rights.

The power list was launched two decades ago, in 2002, in order to “examine the operations of a world that is forever teetering on the brink of becoming a self-sustaining insider chumocracy, or little more than a pantomime commodity exchange.”

Since then, the notion of “power” and which kinds we should choose to celebrate has only become more prickly.

“The art world is a network of vested interests that promotes certain people over others,” ’s editor-in-chief Mark Rappolt told Artnet News. “Over time, there’s been much more of a focus on those who were not [previously] permitted, whether due to social justice, race, ethnicity or geography. Today, the idea of a global art world has changed.”

“How does power manifest? Are we talking about a structure that’s inherently Western that’s exported everywhere? Or is it a system that allows for different interpretations?” he added, noting that the number one spot used to be an easily unanimous decision but has recently become very hard to agree on.

The 2021 list baffled some for seeming to succumb to wishful thinking about who holds power in the art world when it ranked academics and authors like Anna L. Tsing (2) and David Graeber (10) higher than obvious big players like blue-chip dealer David Zwirner (23) and the Winklevoss Twins (58), major NFT investors.

Criticisms like these haven’t prevented from recognizing plenty of great thinkers this time around, including favorites from past lists like Hito Steyerl (4) and Fred Moten (5).

Inevitably, many artists who have been on everyone’s lips over the past few years appeared on the list. Among them were Wolfgang Tillmans (6), Simone Leigh (7), Nan Goldin (8)—notable in particular for her successful protest against museums’ dependence on the Sackler family’s fortune—Anne Imhof (11), Cao Fei (12), Wu Tsang (14), and Olafur Eliasson (15).

The traditional holders of power in the art world did not go unmentioned either, with Zwirner (9), Iwan and Manuela Wirth (17), Larry Gagosian (20), Marc Glimcher (23), Monika Sprüth and Philomene Magers (30), Hans Ulrich Obrist (34), and Emmanuel Perrotin (46) all making the top half.

“There used to be a more isolated art world,” said Rappolt. “Whereas now, I think issues from the real world are being transferred more quickly and readily into the sphere of art. The idea that art has to deal with what’s happening around us rather than its own questions has been one of the biggest changes.”