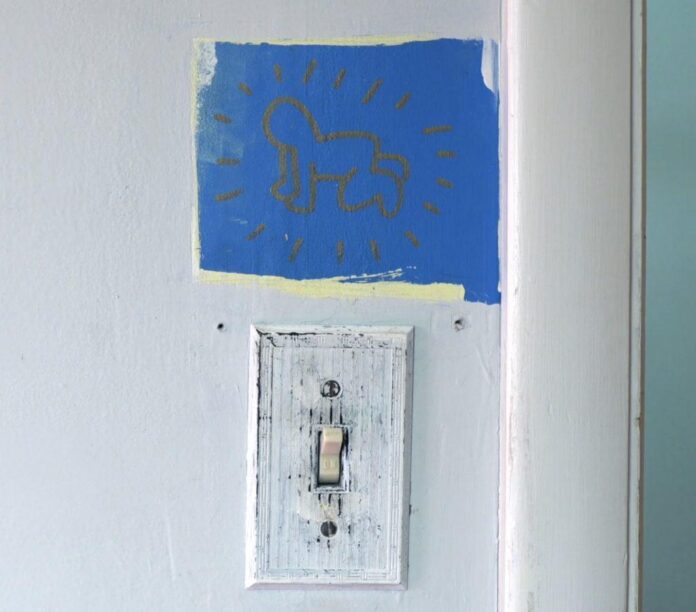 Plenty of works featuring Keith Haring’s famous “Radiant Baby” motif—a simple outline of a crawling figure emanating light—have been sold at auction over the years. But one that’s coming this fall to Rago Arts and Auction in New Jersey is different: Haring painted it on the wall of his childhood bedroom, just outside of Kutztown, Pennsylvania,

It is unknown precisely when the small work, which depicts a yellow baby against a five-inch-wide blue background, was created. The artist lived in the house until he was 18, and frequently visited his parents there until he died, in 1990.

The new owners of the house, who bought it directly from Haring’s parents, decided to cut the work out of the wall, just above a light switch.

It will be included in Rago’s sale of post-war and contemporary art on September 14. The auction house has not disclosed a pre-sale estimate.

“The piece is amazing because it is on the wall of the bedroom in which he grew up,” said art historian Christine Isabelle Oaklander in a short video put out by the auction house. “The radiant baby and the radiance of the light are inextricably woven together […] it’s almost like an autograph, it’s really a tag that said ‘this was Keith Haring’s room.’”

Known for transforming New York City’s subways and streets with art that bore potent social critiques, Haring often tackled difficult themes with the use of playful colors and stick-figures, developing a style that became instantly recognizable.

The record price for a Haring work at auction is $6.5 million for , a painting featuring a prominent Radiant Baby at the center that was made for a rally the artist organized in Central Park addressing the use of nuclear power.

Rago has a track record with Haring artworks, having sold 216 lots by the artist in the past.

Will this piece smash auction records? Probably not, but it has already smashed the wall of his former family home. From one hammer to another, the market for Haring lives on.