Home News The story of Maryan, the Polish Holocaust survivor who expressed his trauma... 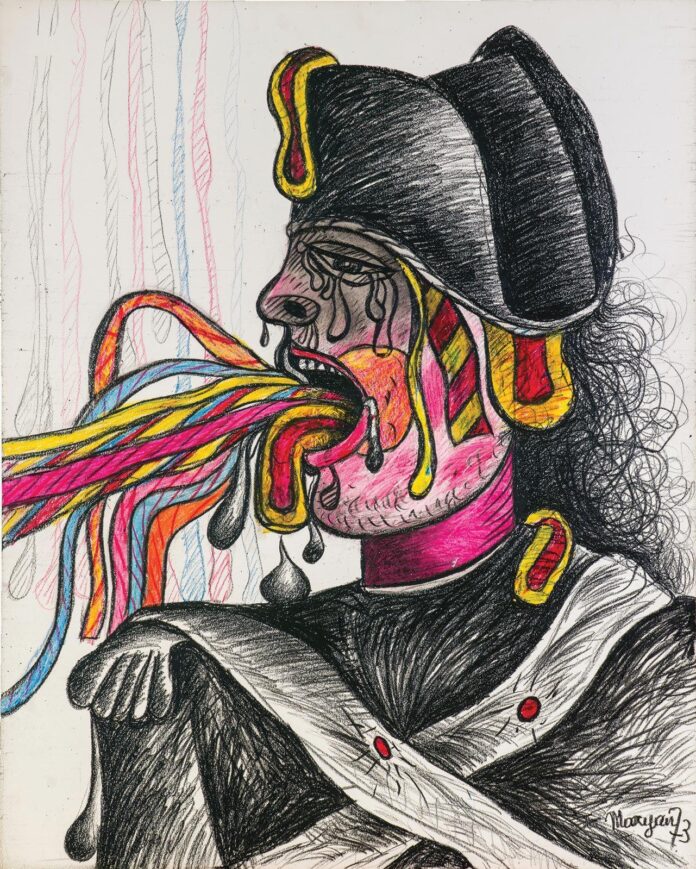 For years after his death, Maryan S. Maryan’s wife, Annette, fiercely guarded the Polish artist’s work in his studio at the renowned Chelsea Hotel in New York. Maryan’s studio was covered, floor to ceiling, with a haunting arrangement of masks from Africa and artefacts from his childhood home. Alongside hung his canvases: twisted, cartoon-like depictions of strange, bulbous figures, their bodies bleeding, vomiting or oozing with pus, rendered in discordant, oily colours. His studio remained this way for years, untouched and unseen by the world outside, slowly gathering dust. Any request from curators to see her late husband’s paintings were rebuffed by Annette.

Maryan died of a heart attack aged 50 on 15 June 1977 while working in his studio, with Annette close by. In the months leading up to his death, he had suffered a huge mental breakdown, forcing him to live for a while under secure psychiatric care, at times unable to speak.

He was born Pinkas Bursztyn in 1927 to Abraham Schindel and Gitla Bursztyn, a working-class, observant Jewish couple from Nowy Sącz in southern Poland. In 1939, Pinkas, his parents and two siblings were captured by Nazi authorities. The 12-year-old was sent to the Rzeszów ghetto, east of Krakow, before being forced onto the trains that took Jewish people to Auschwitz. He arrived at the death camp in 1944, already separated from his family.

Pinkas was prisoner number A17986. He managed to survive until the camp was liberated by Allied forces and was the only member of his family not to perish during the Holocaust.

After the war’s end, and while in a refugee camp, Pinkas’s leg was amputated. In 1947, he travelled to what would soon become Israel where he began his life’s work by studying art in Jerusalem. The first solo exhibition of his work took place in the city in 1949. Soon after, he shed the name he was born with, renaming himself, officially, as Maryan S. Maryan.

After a period of time living and working in Paris, Maryan and Annette arrived in New York in 1962 on a boat called the Leonardo da Vinci. There, he made the Chelsea Hotel his home and studio, with Patti Smith, Robert Mapplethorpe and various New York creative luminaries in the adjoining halls. There, he tried to reconcile himself with the trauma of his past.

Now, after years of careful protection, Maryan’s work will return to the country that first provided him sanctuary with the opening of a major survey of his work called My Name is Maryan at the Tel Aviv Museum of Art. The show will open with a reconstruction of Maryan’s study, achieved using photographs taken in the 1970s by a friend.

The exhibition is the first outside the US to examine Maryan’s life and work, 45 years after his death. It will include paintings, sculptures, drawings and a film, Ecce Homo. Created in 1975 in Maryam’s studio, the film is the artist’s only known work in the medium. In it, Maryan recalls in first-person testimonial his experiences in the Nazi prison camps, including a memory of having to lie among bodies after a guard had fired indiscriminately into a group of prisoners, pretending to be dead in the hope of evading detection.

The film was made after Maryan’s time in psychiatric care, when he filled hundreds of notebooks with drawings and writing, each an attempt to understand the unimaginable pain of his childhood. The documents demonstrate an attempt to objectify his own personhood, depicting himself as a young, isolated boy. Some of these documents will also be on display in the show.

There has been renewed interest in Maryan’s life and work. This travelling exhibition debuted at the Museum of Contemporary Art North Miami in November 2021; shortly after, the artist’s estate gained representation from the Parisian dealer Kamel Mennour. While Maryan’s bodily remains are buried in the Montparnasse Cemetery in Paris, interest in his work is pressingly alive.

‘Promoting Korean Soft Power Is the Most Important’: How Korean Corporations Are Bringing Their Country’s Art to the World’s Museums