Home News There Has to Be a Better Way to Argue About the Climate-Activist... 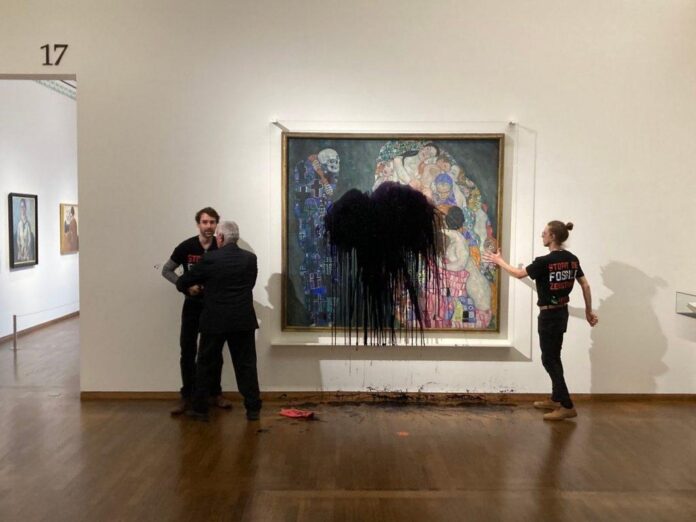 The rising tide of environmental activist attacks on artworks has fueled a lot of attention for the cause—that much is clear.

The tactic has spread like a meme. The headline-making soup attack on a Van Gogh last month in London has been followed, just to name a few, by activists targeting a Warhol in Canberra, Australia; a Klimt in Vienna; a painting by Emily Carr in Vancouver; Goyas in Madrid; in Oslo; and the in the Hague. More are likely to come.

“These tactics are specifically geared toward getting media attention,” one researcher studying this new art-attack-focused “radical flank” of the environmental movement told the AP, stating the obvious. Unfortunately, that attention has been something of a poisoned chalice. Judging from reaction in both social and trad media, sentiment about the tactic runs at least 10 to 1 against—and certainly not just from conservatives or climate deniers.

Even among the minority of positive media takes, the refrain that the activists “didn’t actually damage the art” (the attacks have mainly been targeted at works behind glass) actually shows how brittle the support is, basically admitting that doing the thing probably be a bad idea.

But because these actions are based on shocking people into paying attention, the campaign has only two ways to go—to peter out as the media begins to treat them as PR stunts, or to escalate to keep up the momentum. The food-attack-on-art tactic was already an escalation from the earlier glue-yourself-to-art method, as that became less newsworthy. 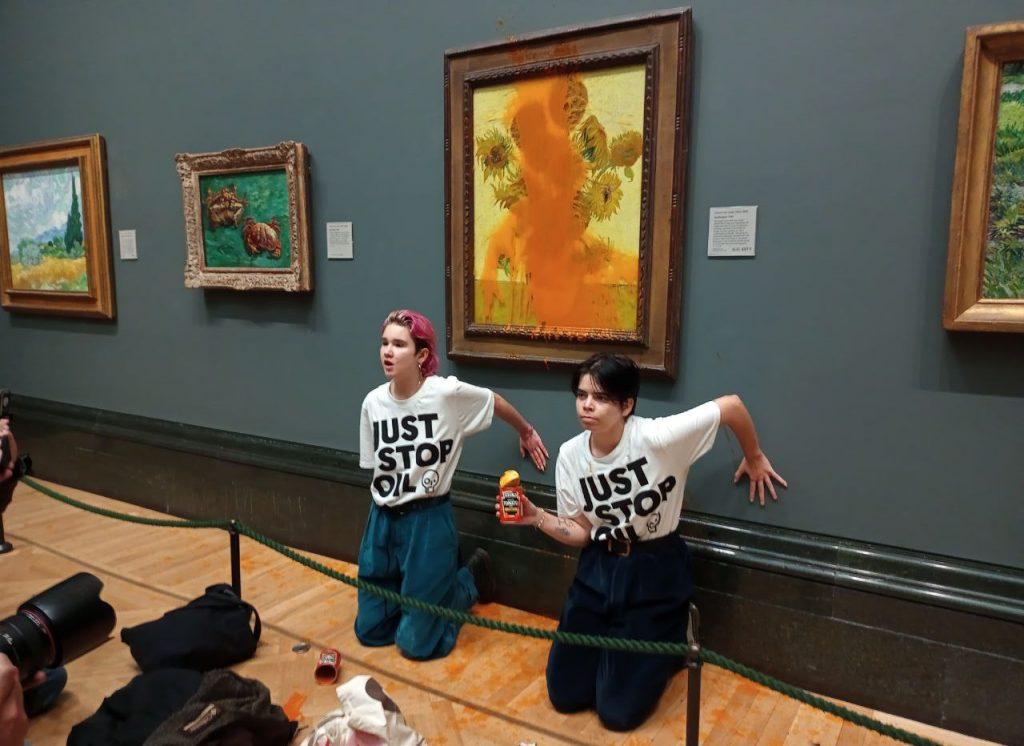 The Politics of Desperation

Before we go any further, everyone should read Dorian Lynskey’s long article in the , for which he spent time with the activists of Just Stop Oil, the U.K. group behind the soup attack. That was from April of this year, back when the tactic was still mainly blockading tankers and not museum attacks.

Lynskey’s piece leaves me very sympathetic. These are mainly young people, staring into the abyss of climate change, who’ve taken it upon themselves to actually live as if what the scientists tell us is true: that we have just a short time to act to turn things around.

Environmental writer Andreas Malm, writing in the describes his own initial skepticism at the art-attack strategy—and then of feeling cautiously convinced after looking into it. Just Stop Oil’s key goal is to halt the authorization of new oil permits. Thanks to their wave of actions, a much larger number of people are now aware that the U.K. is authorizing a bunch of new drilling that is sure to push humanity closer to self-immolation.

And yet… I would slightly reverse Malm’s emphasis. I would say that if Andreas Malm, author of , has initial reservations about using famous art as a target for eco-activism, then you probably have a problem in communicating the valor of your cause to a larger public through the art-attack tactic.

Another important environmental writer, George Monbiot, had a supportive piece in the . His point is that critics who say that the art attack is a bad tactic need to acknowledge that environmentalists have all the other, less divisive strategies—peaceful protests, petitions, awareness campaigns, etc.—and gotten nowhere near the kind of attention the museum actions have received.

“But… why target art?” is among the most common reaction from observers. While you can spin the answer many different ways, the actual answer seems to be that . The acts work because they are incongruous. That generates attention of the “…they did ?” variety that gives them viral lift, even as other types of more relevant action generate less attention.

Monbiot’s observation is an indictment of our desiccated civil society. However, saying that the expediency of the art-attack tactic is directly related to the shallow logic of spectacle demanded by the media is not actually a great endorsement. It rather shows how social movements are warped and distorted by the logic of spectacle, undermining their longer-term viability by forcing them to become the worst version of themselves just to get a media hit. 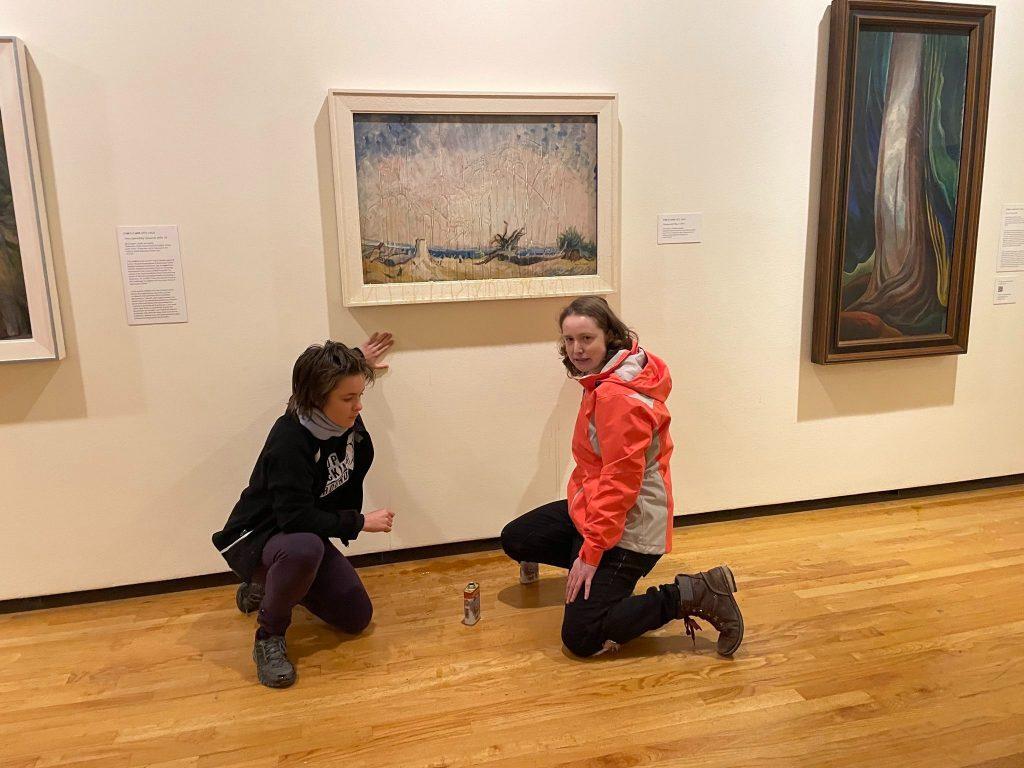 I am struck by this passage, from a Q&A posted on the Just Stop Oil website titled “Why Art? Why Now?” The document was put up in the crush of attention following the October 14 Van Gogh soup attack, in the moment of maximum press attention:

This isn’t really an answer. “Won’t this just repel people?” is the number-one stated objection to the actions. Recent history is full of movements that expanded dramatically and then petered out. The Just Stop Oil reply is, essentially, “If you even ask that question, you just don’t get it.”

There is now an alarmingly prominent left-wing theory that the art attacks are actually an “op,” funded by pro-fossil-fuel forces, designed to discredit environmentalists. I don’t believe this—but there’s a reason it has traction.

We know from the history of social movements that when they actually become threateningly popular, one typical tactic is to infiltrate them and push them towards actions that are alienating and self-destructive, aiming to split the movement and to discredit the cause.

Go look up COINTELPRO. Better yet, go look up the infiltration of the Dakota Access Pipeline movement.

Again, I am not saying that the art attacks are a plot by BP-funded provocateurs. Forceful activism will inherently be provocative. Debating rhetoric and tactics is often just a deflection. But you can’t just dismiss the question about alienating people either. Just cheering on whatever grabs the spotlight is not actually an engaged position.

The Limits of Shock

Well, there is no alternative on the level of media discourse. What would make an actual difference is the existence of a large-scale and effective plan to turn things around that was making visible gains. That would make these kinds of desperate actions less necessary.

The truth is that these art-attack actions only make sense if they have an audience. One of the effects of a media-focused, “transgressive” framework is to polarize opinion, because polarizing actions attract more media attention. But this also tends to encourage thinking about the potential audience as an antagonist—and it is that fact specifically which makes the attention generated such a mixed blessing.

Because the audience is not an undifferentiated mass of sleepy animals being shocked into motion. Some are hardcore head-in-the-sand types and militant free-marketers. Those you will not reach, and presumably the organizers of Just Stop Oil or Last Generation are not even trying to.

Clearly, the nearest, largest layer of activatable people are those who are of the reality of climate change but have actual questions about what it means to act. These range from “Isn’t oil a necessary evil we need for a transition, at least in the short term?” to “My life is already precarious—do I have to choose between my survival today and the planet?” to, crucially, “Isn’t it hopeless?”

Startlingly little of what is said or written about the attacks acknowledge this. Instead, we are just having a big meta conversation about attacking art.

It is worth saying that, when interviewed about their actions, Just Stop Oil activists actually have answers to some of these questions. Asked what the group wants, Phoebe Plummer, one of the two activists who threw soup on the Van Gogh, told NPR:

So our demand is that the government immediately halts all new fossil fuel licenses. In the U.K., we have eight years worth of oil in reserves, so those eight years need to be used to make a just and fair transition to a renewable future. And that transition needs to include training for people who work in the fossil fuel industry currently. There’s a lot of transferable skills so that they have job security in a renewable future. It needs to include the insulation of British homes and it needs to include subsidized public transport.

But that exchange is still pretty far down, beneath questions like “Why tomato soup?”

And a great deal of the punditry in support of the art attacks—for instance, Salon’s Émile P. Torres—follows the pattern of dismissing any questions about the art-attack tactic as rightwing and then restating the dramatic and terrifying facts about climate change, as if shocking people with the facts were the point.

It’s far from clear to me that lack of “awareness” is the key problem. If the near-constant news reports about deadly wildfires, floods, and super-hurricanes isn’t enough to wake people up, I am not sure getting gak on a painting is going to be what finally rips the veil off.

Distress Signals From the Future

If you are observing such actions and thinking about how to respond, how you read them matters. I think you have to take these art attacks as signal flares telling you something about where public consciousness is heading.

In a book I put out earlier this year, I have a chapter titled “Art and Ecotopia,” about the weaknesses of the “awareness-raising” strand of eco-art, and the need of centering a realistic, positive vision of the future if artists are going to put their energies to good use. But I also end by saying, “without a positive shared narrative or image of the future to hold on to, the psychic consequences will be both predictable and horrible. Then, the mental weight of the end-times narrative can only be expressed via metastasizing death cults and sociopathic nihilism, as the lack of a positive future renders the present meaningless.”

So much of what is going on in the present can be read as the psychic side effects of the breakdown of expectations about any realistic, positive picture of tomorrow. That’s a much bigger context than just the local decisions of activists responding to media incentives, positive and negative.

This breakdown explains the vulnerability to all kinds of people to crypto scams promising instant riches, as people lose an ability to justify saving for a future they don’t think will come. It explains the spreading allure of cults, as people look for new narratives to replace old, collapsing ones in a world that is not offering realistic answers to them (in my mind, this includes contemporary art’s obsession with a quasi-mystical, “imagine-we’re-mushrooms” style of environmentalism). Shoot—lack of belief in the future is one of the reasons why people are taking up smoking cigarettes again.

The art attacks are one more response. They are actually a more constructive kind of response than some of these others. At least they imply a future.

A world that stops believing in its own future is not going to be kind on institutions whose entire purpose is to determine what gets saved and passed along. And these actions will seem very constructive compared to whatever happens in museums in five years—if we let the future vanish entirely.