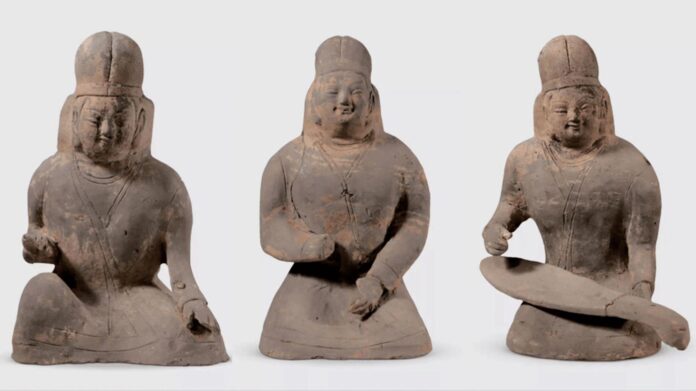 Archaeologists from the Datong Institute of Cultural Relics and Archaeology have reportedly unearthed a large trove of ancient terracotta figurines in the Shanxi province of China, according to state-run publication China Daily.

The figurines, found in the tomb of upper-class individuals who lived during from the Northern Wei Dynasty (386-534CE), depict a variety of dancers, domestic workers and labourers, providing a historically important glimpse into daily life of the period. The archaeological team stated that this discovery constitutes a watershed moment in the study of funerary culture. The female musicians depicted in this terracotta group will also provide a coveted link between ethnic costuming and national culture.

The Northern Wei Dynasty marked a nearly 150-year period of political turbulence and social reform, defined by political recentralisation, ethnic integration and the construction of a portion of what would become the Great Wall of China. Many of the finest known examples of ancient Taoist and Buddhist art known to contemporary audiences date from this period, including the Unesco World Heritage Sites known as the Longmen Grottoes and Yungang Grottoes.

The Positive Effects Of Art on Mental Health