Home News Unionized Workers at the Philadelphia Museum of Art Are Going on Strike... 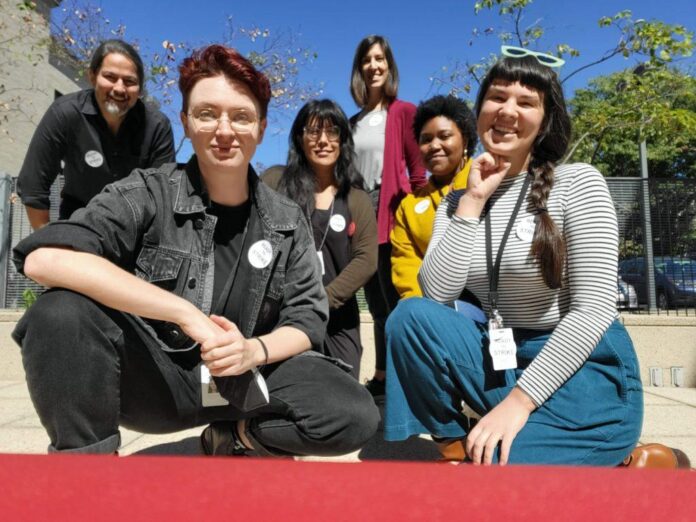 For the second time in two weeks, workers at the Philadelphia Museum of Art (PMA) are staging a strike, as contract negotiations with the institution remained stalemated.

Today, members of the union—a group of more than 150 employees representing almost every department at the museum—will picket in front of the venue rather than report for work. “Our message has been clear: remedy the Unfair Labor Practices and come to the bargaining table with serious offers,” the group said in an announcement.

The move comes just 11 days after the bargaining unit staged a “warning strike,” hoping to pressure the museum into resolving the prolonged dispute between the two parties.

However, whereas that previous demonstration was conceived as a one-day event, today’s strike could stretch on for days or even weeks as workers say they are prepared to picket until their contract demands are met.

STRIKE STARTS MONDAY. Join us on the picket lines at the Philadelphia Museum of Art starting Monday morning. Last Friday was a warning.

Management has had every opportunity and can still avert a strike, but the clock is ticking. pic.twitter.com/AJpnlMswsE

The group has the resources to do so. At the union’s disposal is a “robust strike fund” made up of donations from individuals and fellow unions, Rizzo explained. One such gift came in the amount of $25,000 from the American Society of Mechanical Engineers this summer.

But Rizzo added that the union hopes not to need all that money. “We’re willing to go sit at the table later today if they want to do that,” he said. “But it’s really up to them to make that move.”

The PMA, for its part, plans to remain open for the duration of the strike. “The museum respects the right of employees to organize and go on strike but is disappointed that the union decided to strike despite the significant wage increases and other offers made by the museum at the last negotiating session,” reads a statement released by the institution today.

The museum also shared details of its current offer to unionized employees, including wage increases of 8.5 percent over the next 10 months and 11 percent by July 1, 2024; a minimum annual salary for exempt employees that is more than 10 percent higher than the current lowest annual salary; four weeks of paid parental leave; a more flexible remote work schedule; and “job security protections that ensure the museum will not use a temporary employee, term employee, subcontractor, or volunteer to lay off or furlough a current union staff member.”

A spokesperson for the PMA declined to “speculate” on whether or not the institution would bring in temporary workers if the strike continued on.

Monday, September 26: The museum is open today. We are committed to serving our community as we continue to negotiate in good faith toward a fair and appropriate new labor agreement. pic.twitter.com/ZOoXsMpqjV

Negotiations between museum management and the workers’ group have been ongoing since October 2020—just months after 89 percent of employees at the institution opted to unionize. Health care and wage increases are among the topics that have been battled over in near-weekly meetings held between the two parties since then.

The museum’s COO, Bill Peterson, as well as representatives from its in-house counsel and the outside law firm of Morgan, Lewis & Bockius—which has a well-documented history of union-busing—are among those who have been present in meetings with the union.

Promoting a message of progress, the museum noted in its press release today that it has  reached tentative agreements with the union on more than 25 “substantive issues.”

The union, in turn, confirmed that headway has been made on numerous “non-economic” issues, particularly during two marathon negotiation sessions that took place last week.

“But when we got to the economic package,” Rizzo said, “negotiations just completely stalled.”

“We showed them [with the last strike] that we’re capable of putting a lot of pressure on, and this week is about continuing that pressure,” Rizzo went on. “I hope we’ll get back to the table really soon, I really do. I’m a museum educator. I want to be there teaching kids this week instead of outside picketing, but that’s really up to senior management.”

A representative from the PMA said that the next meeting between the institution and the union is planned for later this week.

In Pictures: Before V.R., There Was M.C. Escher—See the Graphic Artist’s Mindbending Work on View in Houston

This Masterpiece of Polish Symbolism Was Expected to Be the Priciest Painting Ever Sold in the Country. Now, Police Are Trying (and Failing) to...