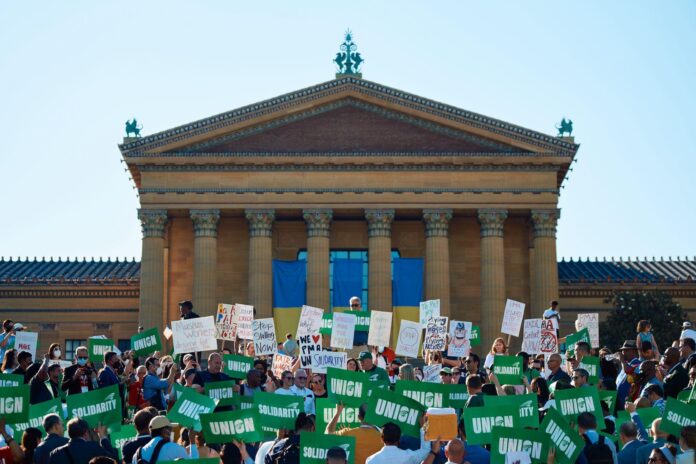 The Philadelphia Museum of Art’s (PMA) union has filed eight unfair labour charges against the museum’s management with the National Labor Relations Board. The charges, filed on 26 August, are the latest escalation of tensions between the museum’s leadership and unionised workers during a contract negotiation process that began following the union’s formation in the spring of 2020.

The museum’s union is part of the local branch of the trade union AFSCME (American Federation of State, County and Municipal Employees) and has made repeated claims via social media that museum administrators have engaged in union-busting actions throughout the negotiation process. In a statement, the union alleges that “PMA management has, in fact, flagrantly violated federal law by repeatedly interfering with employees’ rights established under the National Labor Relations Act of 1935”.

Adopted in 1935, the National Labor Relations Act was created to guarantee the rights of workers in private sector jobs to organise unions and take part in collective bargaining as well as other action such as strikes. The act also addresses many of the inequities that occur in the bargaining process between unions and their employers.

“We are disappointed that the union has chosen to file an unfair labour practice. The museum does not agree with the union’s assertions in the filing and looks forward to responding,” a spokesperson for the museum tells The Art Newspaper. “The museum has been bargaining in good faith with the union, and we remain committed to making progress toward a collective bargaining agreement.”

According to data from Bloomberg Law, the average number of days for a new union and the workplace’s leaders to bargain and sign their first contract is 409 days. While there are a number of factors that can complicate the bargaining process, such as the logistic hurdles posed by the Covid-19 pandemic, negotiations between the PMA’s leadership and unionised workers, begun around 27 months ago, have lasted far longer than the national average.

“I would say that negotiations have been strained. It’s very clear that our proposal as a union and the proposal that management has stuck with for the past several sessions of bargaining, are very far apart,” Nicole Cook, programme manager for graduate academic partnerships at the museum and a member of the union bargaining team, told The Art Newspaper in July.

The PMA Union has held several rallies in recent months to bring attention to the bargaining process. The most recent one took place in July and drew hundreds of demonstrators to the steps of the museum. Earlier this summer the union also started a strike fund, which would be used to compensate workers in the event they went on strike and had to forgo pay as a result of this action. While the union does not currently have plans to go on strike, the fund would allow them to do so if they choose to in the future.

“I hope that this sends a clear message to board chair Leslie Anne Miller and chief operating officer Bill Petersen that the museum’s behavior in and out of negotiations over the past two years is unacceptable and the rank and file workers of the museum won’t stand for it and deserve better,” Adam Rizzo, president of AFSCME Local 397, says. “I’m hopeful that our new director, Sasha Suda, will be able to right this ship when she arrives in September.”