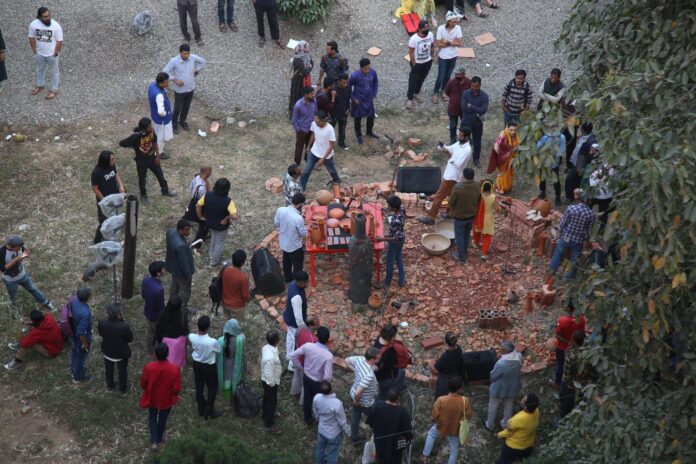 The next edition of the Dhaka Art Summit (DAS, 3-11 February 2023) will mark the beginning of a cross-border collaboration between two of South Asia’s largest private art organisations. The Samdani Art Foundation (SAF) in Bangladesh, which runs and funds the biannual DAS, will partner with India’s leading private museum for Modern and contemporary art, the Kiran Nadar Museum of Art (KNMA) in Delhi, for a “long-term institutional exchange” of “unprecedented scale” in the region, according to an official release.

This partnership, which is open-ended in terms of its timeframe, will take the initial form of a group exhibition, titled Very Small Feelings and centred on the theme of youth. It will debut at DAS for the duration of the event before travelling to the KNMA in July 2023, and will see the institutions jointly commission works, including a performance by the Indian artist Lapdiang Syiem, as well as organise extensive loans of art between the two countries. The latter is a feat easier said than done: the movement of people and goods across national borders in South Asia is often impeded by insufficient infrastructure and long-standing political tensions between its countries. As a result, travelling exhibitions, and other collaborative cultural efforts, are rare.

India and Bangladesh maintain relatively cordial bilateral relations marked by growing attempts at economic and cultural exchange, particularly those focused on the communities and areas most affected by the 1947 partition of Bengal. Nonetheless, recent flare ups have emphasised both the nascency and fragility of this bond. For example, a number of senior Bangladeshi politicians cancelled trips to India between 2019 and 2020 after New Delhi passed the Citizenship Amendment Act, which disproportionately affects those living near the Bangladesh border, particularly Muslims.

Previous attempts at ambitious cultural collaborations between South Asian countries have been made in recent years. In 2015, the border-spanning My East is Your West programme by the Delhi-based Gujral Foundation involved group exhibitions of artists from across the region. The shows were staged in India and Pakistan before travelling to the 56th Venice Biennale as a collateral event, but such feats are typically short-lived.

However the team behind the new Dhaka-Delhi partnership are confident that the joint expertise of SAF and KNMA will ensure its success. “We have the experience to make this happen,” says the KNMA’s senior curator Akansha Rastogi, who is jointly leading the partnership with Diana Campbell, the artistic director of SAF. “It’s about understanding bureaucratic structures and processes, being in touch with the right people in the right places and establishing a sense of trust with them—that network takes a long time to grow, but both our institutions have now built up a decade-plus of knowledge around what we can do and what we can’t; what can move and what must stay in place,” Campbell says.

The weight of both institutions and their close ties to their national governments should help too, especially around thorny issues such as securing visas for artists. DAS is held in collaboration with Bangladesh’s ministry of cultural affairs, which provides the summit with one of its main venues, Shilpakala Academy. Meanwhile, in 2019, the KNMA partnered with India’s culture ministry to organise the country’s first national pavilion at the Venice Biennale in almost a decade.

This partnership also marks a coupling of interests between the eponymous collectors behind these institutions—the industrialist couple Rajeeb and Nadia Samdani, and Kiran Nadar, the wife of billionaire Shiv Nadar, India’s fifth richest man according to Forbes. But as the collaboration is in early stages, the impact that the powerful contemporary art patrons joining forces will have on the subcontinent’s art world remains to be seen.

More clear is how costs will be divided: funding for the partnership will depend on the location of its projects, with KNMA shouldering most of the costs in India and SAF doing so in Bangladesh, Campbell says. She adds that the transport costs are split between institutions, meanwhile KNMA will support the travel costs of all Indian artists to the next DAS. A number of commercial galleries and international cultural funding bodies are also supporting certain artists projects and travel for the exhibition, including the Mondriaan fund in the Netherlands and the Bagri Foundation in London.

The partnership comes at a time when both Nadar and the Samdanis are building new institutions to expand their cultural reach and legacies. KNMA will soon open a vast museum building and cultural centre near Delhi’s airport. Meanwhile SAF’s long-delayed museum near Bangladesh’s north-eastern city Sylhet is due to open in 2024, and will provide SAF with a greater year-round presence and more space to display its collection.

Rastogi says that the partnership is an exciting way for the two institutions—founded within 18 months of each other—to grow together and benefit the artistic communities they support. She points out that the KNMA has developed a strong reputation in showing overlooked art histories in South Asia, while SAF has gained a considerable international reach through its summit, which is regularly attended by the world’s leading curators and critics. Combining the two could become a “potent force”, she says. “Both KNMA and DAS approach ‘institution’ as an evolving form, which is unique to the region that has had dearth of contemporary arts institutions.”

And while the move is certainly born out of the enduring necessity in South Asia for private organisations to lead discourse around contemporary art in the absence of robust public funding, it is also indicative of a wider push towards collaboration among institutions across the world.

“This speaks to what is required to build an institution that reflects the values of the 21st century,” Campbell says. She points out that both SAF and KNMA are founded by women and employ women as their chief curators. “This partnership is certainly rejecting a very masculine type of institution building, in which objects are hoarded, in favour of sharing ideas and nurturing relationships. It is also an exercise in new forms of audience building. It will be likely be a slow process that will grow in unexpected and organic ways. Collaboration is its own artistic process and works on its own timeline.”