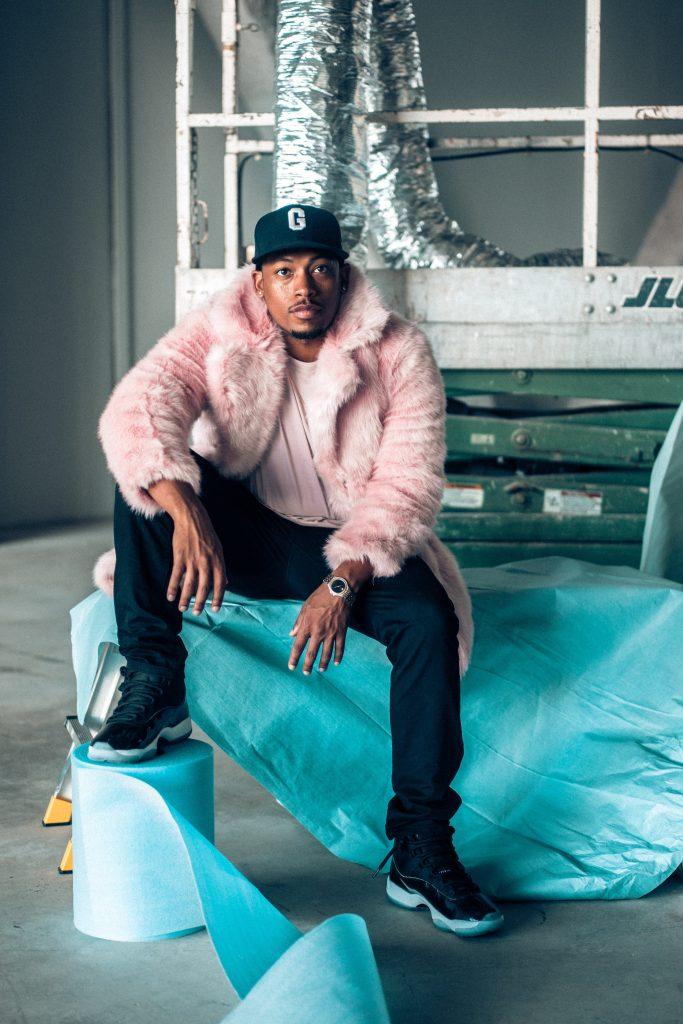 If you find yourself in the Miami Design District this week, you may come across a series of oversized rocking chairs that recall feathered Carnival costumes (albeit crafted from foam noodles), a free-floating dome that looks like a giant disco ball, and hundreds of brightly hued wind chimes hanging in the palm trees. This is all part of , Germane Barnes‘s series of site-specific interventions for the latest Miami Design District Annual Neighborhood Commission, unveiled during Miami Art Week. 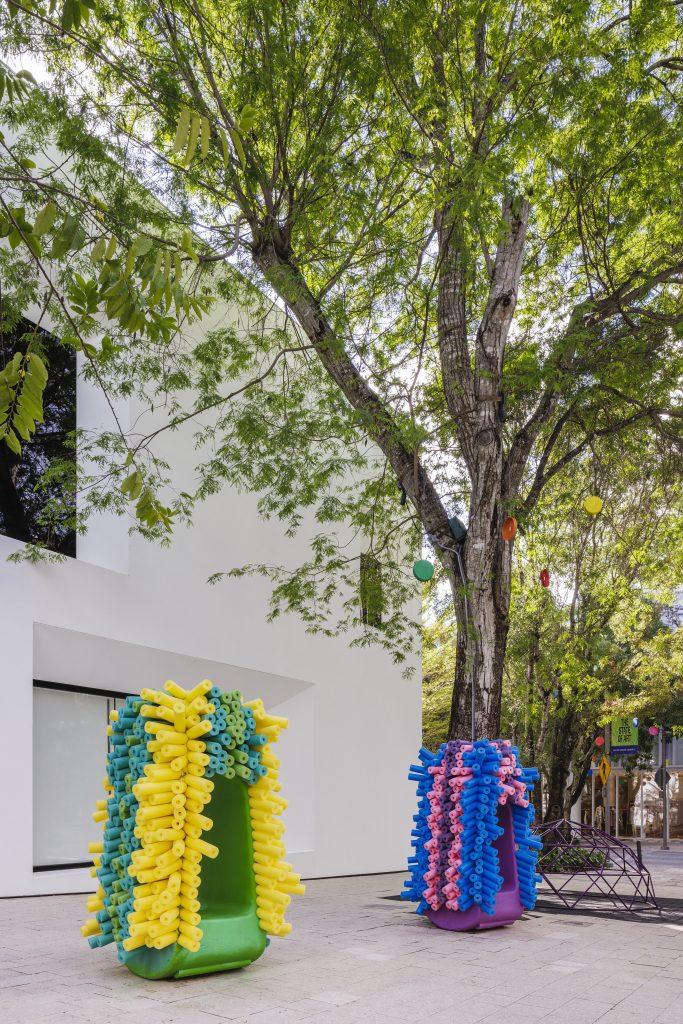 The young, Chicago-born architect—recently a recipient of the Rome Prize in Architecture, the Harvard Wheelwright Prize, the Architectural League Prize, and a grant from Theaster Gates and Prada’s inaugural Dorchester Industries Experimental Design Lab—has had his work exhibited in several museums, including the Los Angeles County Museum of Art and New York’s Museum of Modern Art, where it was featured in the 2020 exhibition “Reconstructions: Architecture and Blackness in America.” As the first local to win the Miami commission, Barnes used the opportunity to further his practice of exploring the connections between architecture and racial identity.

This has manifested in multiple forms inspired by Black cultures from across the Diaspora, such as a porch chair made from metal, wood, and rope—the materials used in South Florida’s shotgun houses—with a milled wooden back post that recalls the combs used to style Black hair. The chair was exhibited at Nina Johnson in Miami, which just hosted Barnes’s first exhibition, featuring tapestries, furnishings, and artworks produced during his residency earlier this year at the American Academy of Rome. 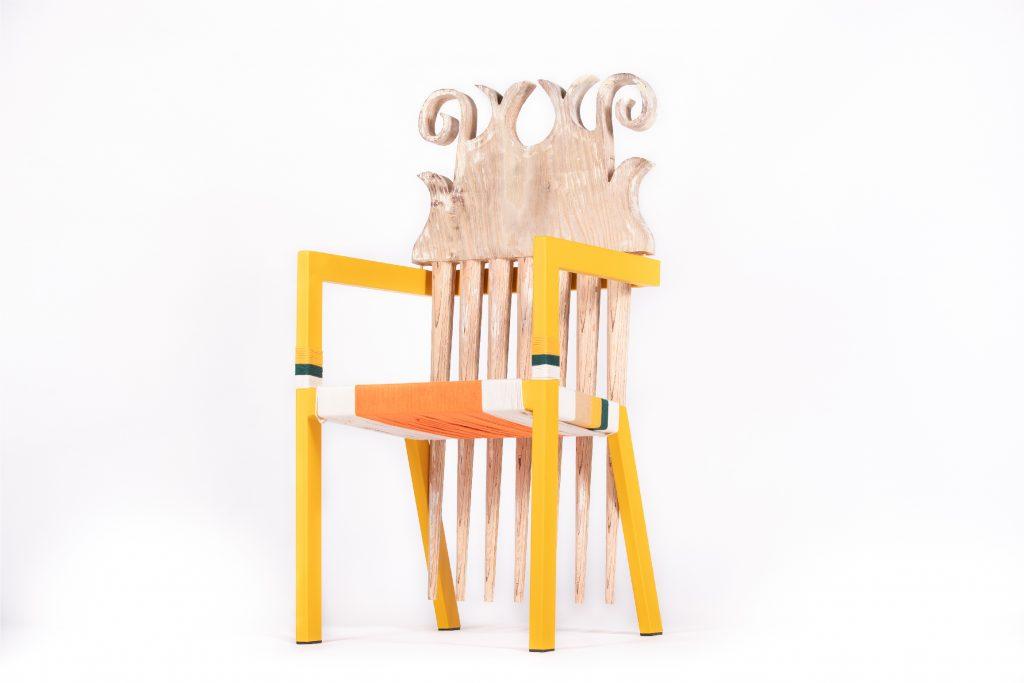 There, the architect’s research focused on lesser-known narratives of architecture, design, and migration, in particular the history of columns throughout Antiquity, and how the porticos they upheld relate to the porches that have become central to Black American life. He is now designing columns of his own: “They are my newest project to blend design and Black identity,” he told Artnet News.

Meanwhile, in Miami, he is drawing on the vibrant visual language of Carnival, in homage to the city’s BIPOC communities. “This city would not be what it is today without significant contributions from people who, on the one hand, look like me, and on the other reflect deep ties to places beyond Miami, especially the Caribbean and Latin America,” Barnes said in a statement.

During the installation, people are invited to gather around the disco ball for Carnival-inspired music as well as a program of talks developed with the University of Miami’s Center for Global Black Studies and the Institute of Contemporary Art, Miami. “The moral to the story is that there is space for everyone here,” he said. 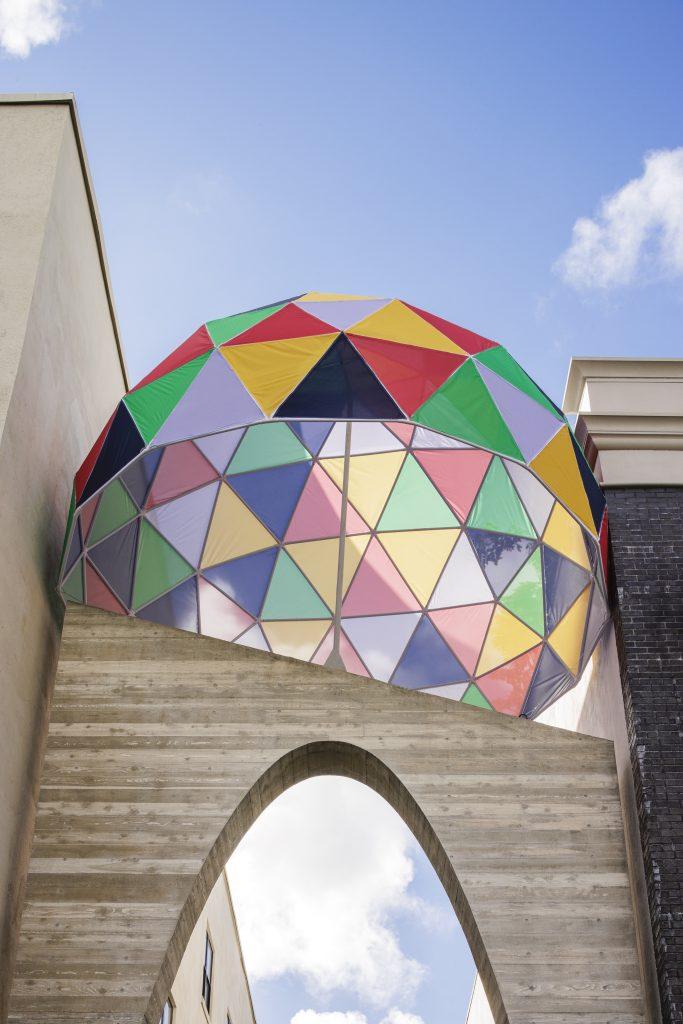 In his work as an assistant professor and the director of the Community Housing & Identity Lab (CHIL) at the University of Miami School of Architecture, and through his own eponymous studio, Barnes is focused on making more space for everyone. In the meantime, he made some time to respond to our Valuations questionnaire.

I am notoriously frugal with my own money. I am of the mindset that if the object works, why purchase a new one? However, most recently, I finally upgraded my cell phone and bought some new headphones to match. (I am omitting the name in case a phone brand wants to give me free stuff in the future!)

I am currently saving up to create two huge columns. They are my newest project to blend design and Black identity. I want them to be full scale, over 10 feet tall.

I would immediately drive to the gas station and put some fuel in the tank. That leaves me with $60, so I would then drive to downtown Miami to get an order of Liger’s cookies, and with the remaining funds get oxtail with extra gravy, cabbage, and plantains at Palatino Jamaican Restaurant in Wynwood.

A fresh haircut! I don’t know what it is about a fresh cut, but I feel like a new person. Hair is very important in the Black community, so this is not uncommon. If I were someone who posted thirst traps, they would always be on haircut days.

I think my discipline is my greatest asset. It makes me very dependable and serves me well when it’s time to complete projects, generate ideas, or be a good friend.

I value work that resonates with me. That allows me to acquire works from diverse authors that may not be in the public sphere.

Mark Fleuridor should be on everyone’s radar. Mark is a Miami-based visual artist who moves through disciplines—he paints, he quilts, he does photography, and he does them all at a very high level. He has his first-ever Miami solo show at Young Arts [through December 10]. He’s incredibly humble and just an all-around amazing person. 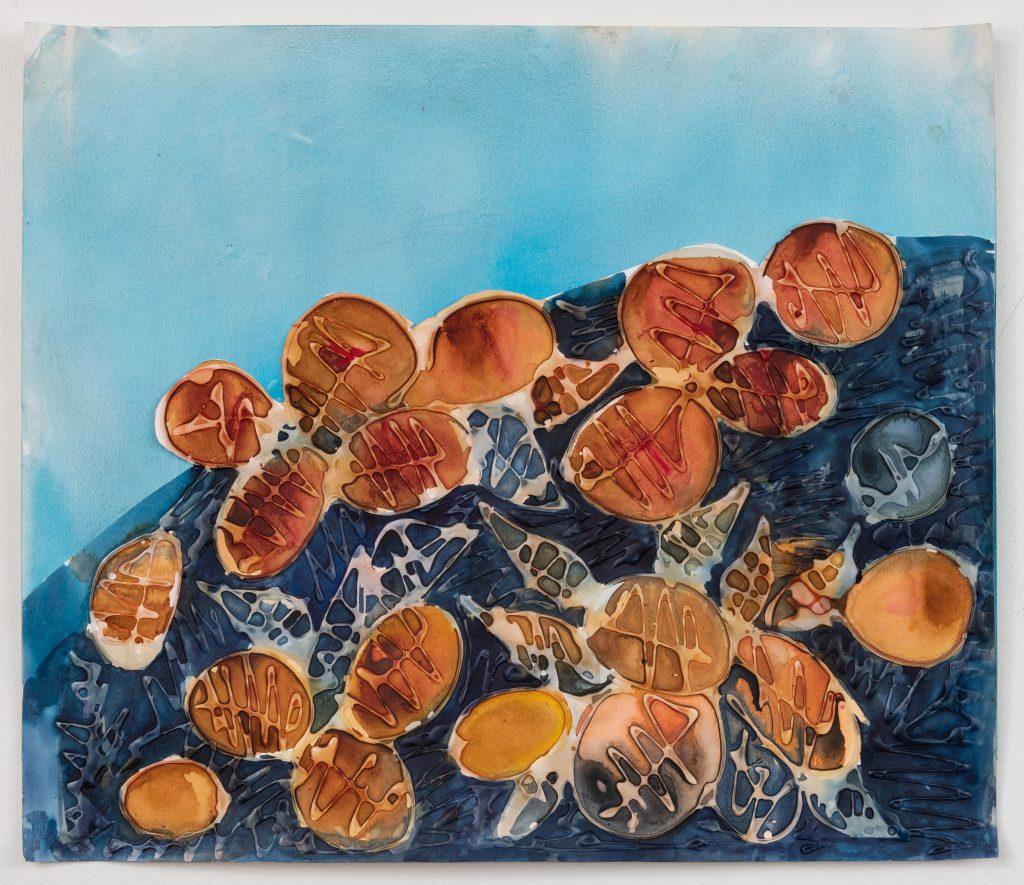 Mark Fleuridor, After the Storm. Courtesy of the artist and YoungArts Gallery.

T. Elliot Mensa works in ceramics as a visual artist and has been on the Miami scene for as long as I have lived here, which is almost 10 years. I have been repeatedly stunned by the eccentricity and thoughtfulness of his work, and I hope others begin to recognize it as well.

The pressure to be relevant. Let me enjoy art the way that I want to enjoy art. People should be allowed to go at their own pace.

A vintage Movado watch that my father gifted me in high school. I went to a highly competitive and very privileged high school in Chicago; many of the students were upper- or upper-middle-class. One day my dad calls me into his room and tells me, “I don’t ever want you feeling like you don’t belong in the same room as those other kids because they wear their money. Here’s my watch; now they’ll look at you and know you’re supposed to be there as well.”

For a long time, at any event where I knew I would be nervous, I would wear that watch as my safety net. I recall one event where I could not find it—I was so scared and sad. I called my dad and told him I lost the watch. He let me know that at this point in my career, I didn’t need it—everyone knew I was supposed to be there. 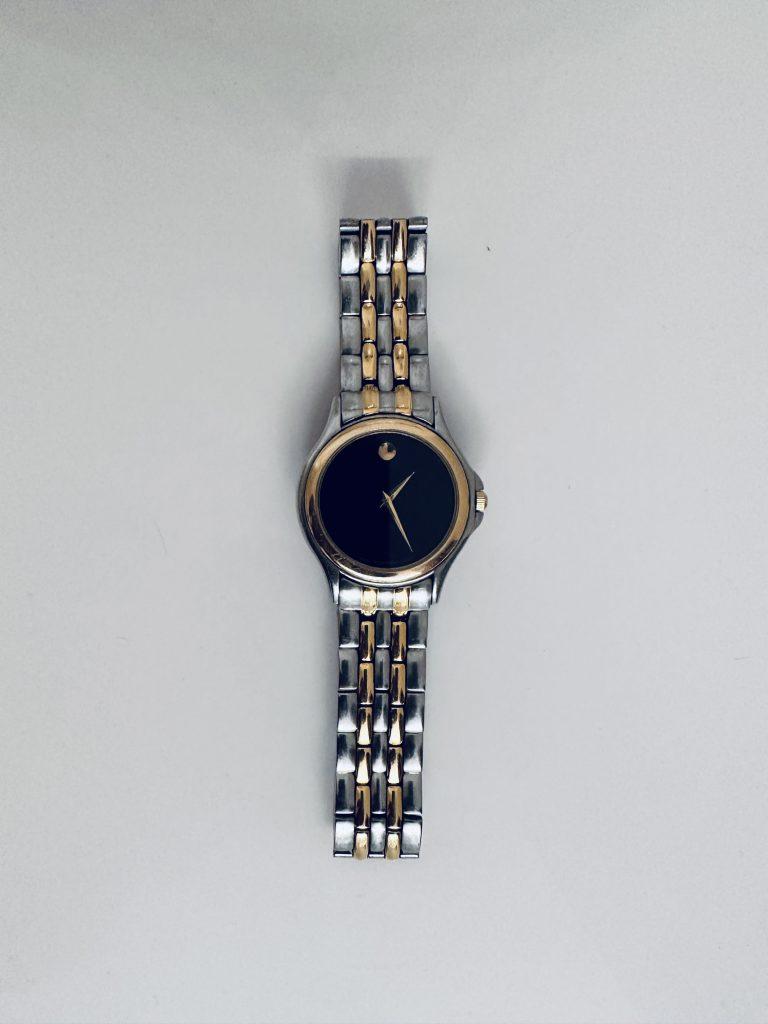 What’s been your best investment?

I bought my first property back home in Chicago. It’s a historic Greystone that I am converting into affordable housing units. This has been a dream of mine to own property in the neighborhood that I was born in and help people find adequate housing. I began this project early in 2020 and we are now ready for tenants!

What is something small that means the world to you?

There’s a tiny chain that I wear as tribute to my late sister, who passed away from cancer. It means everything to me. Rarely does anyone see the chain, but I never take it off. It is my way of keeping her with me.

Pizza in Italy! I know they created it, but American pizza is better. I lived in Italy for seven months and the pizza was mediocre at best. I do not care what rationale you try to use, the pizza was nothing special and ours is superior.

Access to racial equity. There are so many problems that can be boiled down to racial inequities.

I aspire to leave this place better than I found it.

3D technology at the service of art