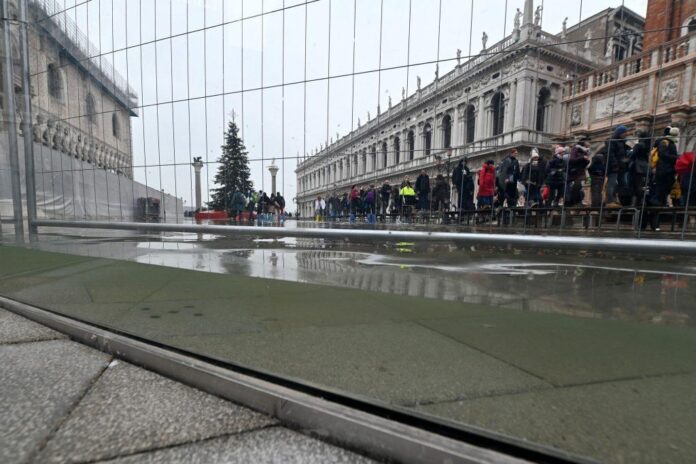 How can Venice save Saint Mark’s Basilica from the rising waters of Acqua Alta, the lagoon’s seasonal high tide? In a simple and straightforward solution, the Italian city has erected glass barriers around the 900-year-old church to keep the waters out.

The new barriers will protect against up to three-and-a-half feet of water, which would allow for a high tide of over six feet above sea level. Working in concert with the transparent fencing is an engineering project to create underground drainage channels below the church and the square that are designed to remove flood waters from the area.

“Let’s hope that, from now on, there are no more high waters that will touch the base of the basilica,” Mario Piana, the basilica’s architect and restoration expert, told the . 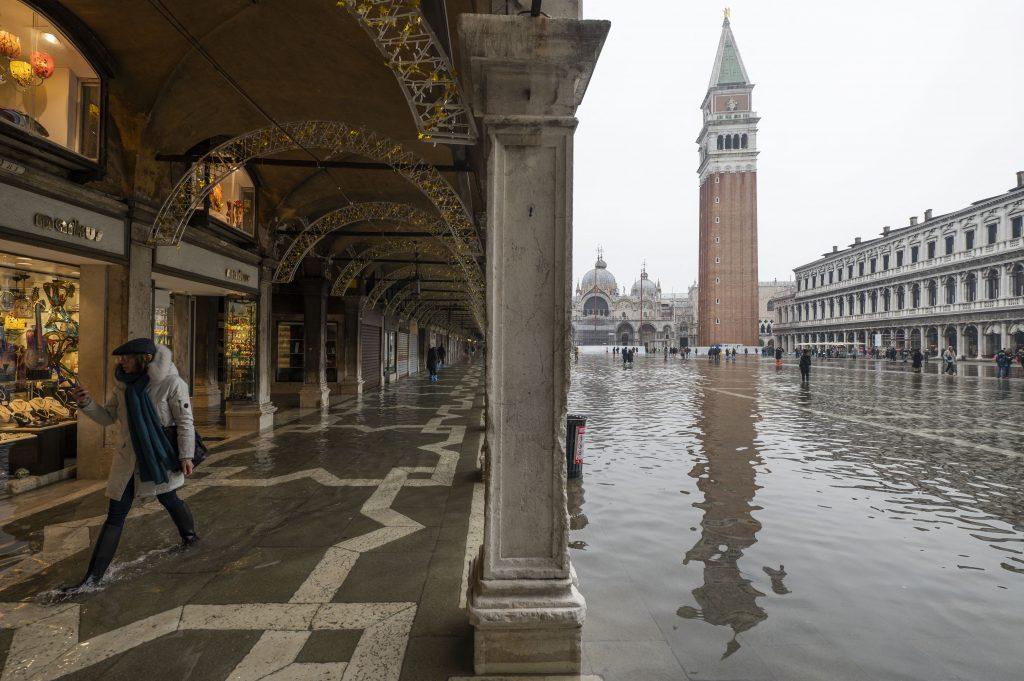 Saint Mark’s Square flooded by an Acqua Alta event on December 10, 2022. The high tide was too low to operate the MOSE Experimental Electromechanical Module that protects the city of Venice from floods. Photo by Andrea Pattaro for AFP via Getty Images.

To keep the glass walls from being overturned by the force of the water, the city installed the barriers using a base of armored concrete buried beneath the paving stones of Saint Mark’s Square. (The intricate geometric design, of white limestone and gray trachyte, was laid in 1723 and is the work of architect Andrea Tirali.)

The church and its namesake square sit in one of the lowest-lying areas of the city, with the square among the first places to succumb to rising tides. 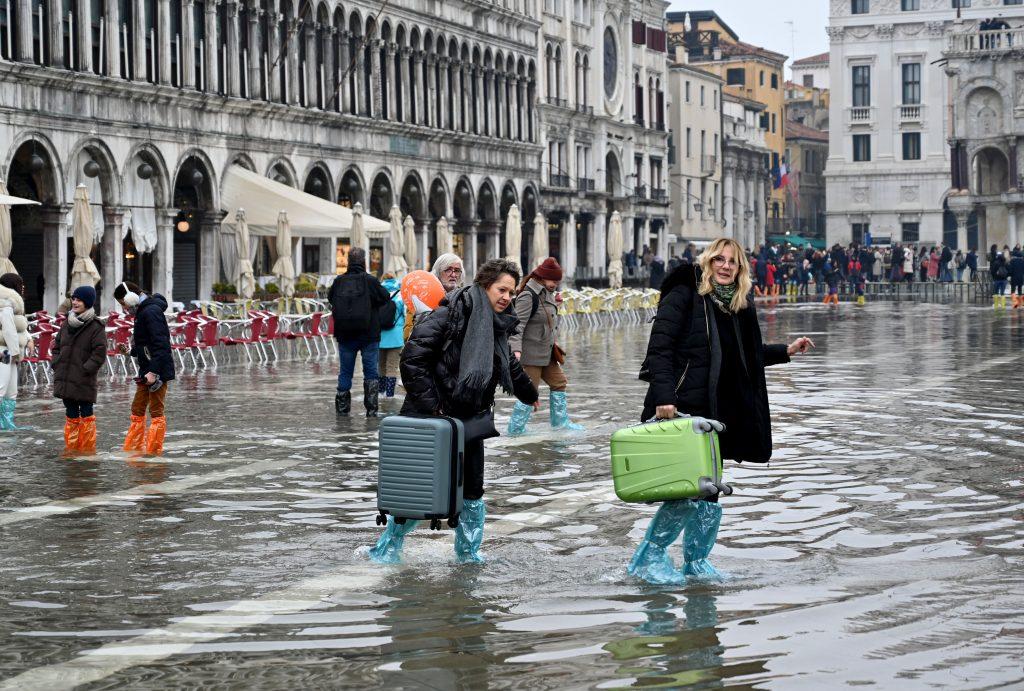 Tourists in Saint Mark’s Square traverse the floodwaters of an Acqua Alta event on December 10, 2022. Photo by Andrea Pattaro for AFP via Getty Images.

The flooding was particularly bad in 2019, forcing the evacuation of the regional council chambers and temporary closures of city museums and the Venice Biennale as water levels reached to near-record heights. The city was able to safeguard most of its art despite the worst flooding in half a century, but the issue remains a pressing one as Venice looks to adapt to rising sea levels caused by climate change.

Even after flood waters subside, their effects can be lasting. The seawater can cause erosion, and leave behind corrosive salt crystals—potentially damaging the famous basilica’s marble columns and mosaic floors. 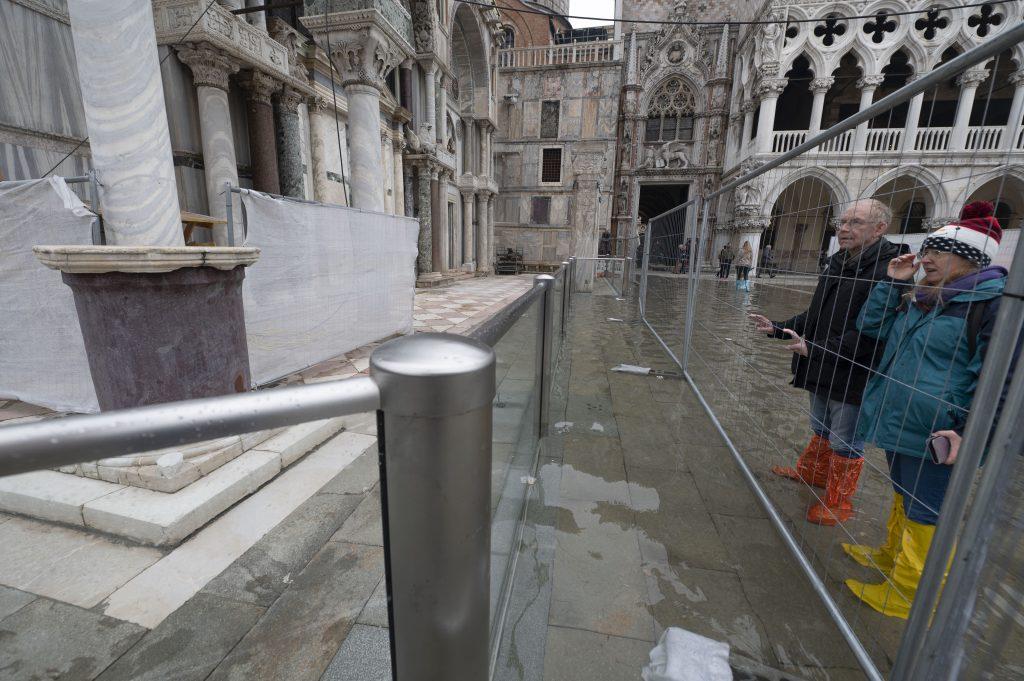 Saint Mark’s Basilica is now protected by transparent glass barriers that keep out the floodwaters of Acqua Alta events. Photo by Andrea Pattaro for AFP via Getty Images.

The church is not working alone to try and protect the city’s cultural heritage against rising tides. After years of delays—as well as 35 arrests on charges of corruption, including against the mayor—Venice successfully deployed 78 flood barriers at mouth of the lagoon as a test of the the €7 billion ($9.5 billion) MOSE Project in October 2020. What was projected as a 53-inch rise in water levels amounted to mere puddles, demonstrating the system’s ability to safeguard against flooding.

Until the project’s completion, however, the barriers are only enacted when water levels are expected to exceed 51 inches. Saint Mark’s begins flooding at tides of just 35 inches, necessitating the additional protective measures.