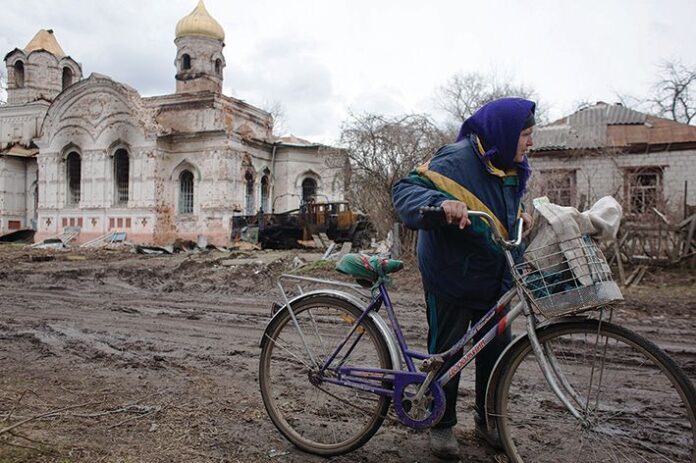 A gleaming sculpture of three dancing women, their nude bodies resembling a Matisse painting, stands in front of the Palace of Culture in the Ukrainian city of Lozova. On 20 May, two Russian Kh-22 supersonic bombs dropped from the cloud-strewn skies and decimated the building. It was a direct hit, the bombs gutting the entranceway of the recently renovated cultural site. In the hours after the blast, Ukrainian news channels streamed footage of an elderly man trying to repair the damaged sculpture of the women, even as he is surrounded by the rubble of the still burning building.

That evening, in his nightly address to the nation, Ukrainian President Volodymyr Zelensky gave his verdict. “The occupiers have identified culture, education and humanity as their enemies,” he said. Echoing the president, the regional governor of Kharkiv, Oleg Sinegubov, said: “There is no doubt the occupiers directly targeted the Palace of Culture.”

On 22 May, Ukraine’s culture minister Oleksandr Tkachenko wrote on Facebook: “Constant shelling, rockets and bombings has resulted in the destruction of 21 national monuments, 88 local monuments and seven newly discovered cultural heritage sites.” He added that Ukraine is “already working with international partners on a plan to restore our cultural heritage”.

Have the Russian occupiers, as Zelensky says, identified Ukrainian culture as the enemy? On the eve of the invasion, the Russian President Vladimir Putin said in a televised speech that Ukraine had never held “real statehood”, and that Russia’s neighbouring country, independent since 1991, was an integral part of his country’s “own history, culture and spiritual space”.

Or are Ukrainian heritage sites and historical artefacts being lost as collateral damage amidst the chaos of war? This, increasingly, is the most pressing question for museum and heritage professionals across the globe as they work to assist Ukrainian colleagues in the midst of war.

Although unproven, the country’s Ministry of Culture and Information Policy says the Russian occupiers are attempting to deny the Ukrainian people the places that provide them with a collective memory and shared history. As of June 9, the ministry says 389 cultural heritage sites have been destroyed or damaged since the invasion began.

But the detailed work of proving this claim—of verifying how the damage came about and of providing evidence that the destruction was strategic—requires a concerted international effort.

As of 30 May, The United Nations Educational, Scientific and Cultural Organisation (Unesco) has verified damage to 139 cultural sites, including 62 religious sites, 12 museums, 26 historic buildings, 17 buildings dedicated to cultural activities, 15 monuments and seven libraries.

A report, meanwhile, by international legal scholars and genocide experts released on 26 May by the New Lines Institute for Strategy and Policy and the Raoul Wallenberg Centre for Human Rights concluded that there is a “very serious risk of genocide” in Ukraine, citing the “destruction of cultural and sacred sites” as an indicator.

Kharkiv, the country’s second largest city and a major cultural center, is the worst hit, according to the Ukrainian government. Affected sites number at 94 in the surrounding region, of which 78 are in the city.

Mariupol, on the Azov Sea, once a Greek colony, is the second most affected, with 52 damaged sites in the city from a total of 72 in the surrounding Donetsk region, according to the ministry’s heritage site.

Ukrainian government sources claim religious and holy sites are being actively targeted above all else. The Holy Dormition Sviatohirsk Lavra, a historic monastery under the jurisdiction of the Ukrainian Orthodox Church of the Moscow Patriarchate in eastern Ukraine, was damaged in March and again by Russian shelling earlier this month. St. George Skete, an ancillary building affiliated with the monastery, was destroyed, according to a Facebook post by Yurii Kochevenko, a Ukrainian military officer, confirmed also by a news website affiliated with the Russian Orthodox Church. In a video showing the ruins, Kochevenko said it had been intentionally destroyed by the “Russky mir” (Russian world).

Leading Ukrainian academics also decried an air strike on 7 May that destroyed the National Literary and Memorial Museum of Hryhorii Skovoroda. The musuem is named after the 18th-century philosopher and poet, who is revered as a national symbol. The mansion in which he lived and worked at the end of his life also burned; although its collection had been moved in advance.

The number of attacks against cultural sites combined with official Russian statements denying Ukrainian nationhood has fueled discussion of a cultural genocide by Russia as a colonial power. Julia Musakovska, a Ukrainian poet and translator wrote in a Facebook post after the Skovoroda museum was hit that “clearly, the enemy’s goal is to erase the Ukrainian national identity and culture by destroying our heritage completely”.

“We are trying to gather information and we are trying to check that information,” says Sophie Delepierre, the head of heritage protection at the International Council of Museums (Icom). “The international community is taking coordinated action to fight [the destruction of heritage],”she says. “There are many actors beyond the museum community—The World Customs Organisation, border police, Interpol, Unesco. But we have to find the right way to fight, and we have to fight together.”

Unesco, Icom and affiliate organisations like the International Alliance for the Protection of Heritage in Conflict Areas (Aliph) and the Heritage Rescue Emergency Initiative (Heri), are currently developing a mechanism for independently assessing and organising this mass of data, working in line with the 1954 Hague Convention for the Protection of Cultural Property in the Event of Armed Conflict.

The Netherlands-based investigative journalism group Bellingcat and its partner, Newsy, released a report on June 7 that contained extensive findings from the analysis of several Ukrainian heritage sites attacked or bombed during Russia’s invasion. “The aim was to see what open source could tell us about the condition of the sites and the circumstances that led to their damage and destruction,” writes Maxim Edwards, the editor of Bellingcat.

In the US, the Cultural Heritage Monitoring Lab (CHML), part of the Virginia Museum of Natural History in Martinsville is working in partnership with the Smithsonian Cultural Rescue Initiative. There, a team of historians, conservationists and archaeologists are collating evidence via “geospatial” means; the close monitoring and sifting of satellite imagery, remote sensing and open-source media and footage. An impact summary released in May served to capture the size of the task for those outside of Ukraine. The CHML has found evidence of 458 damaged cultural sites. “Memorials and places of worship” have been disproportionately damaged, the summary notes.

“We are monitoring over 28,000 cultural sites and objects throughout Ukraine,” said Hayden Bassett, Director of CHML, in an interview. “Our approach allows us to identify potential impacts every 48 hours, which is the immediate need in this phase of the conflict.”

But the distant work the CHML is doing must be complemented by a range of on the ground resources, Bassett says.

“We need more than satellite imagery alone,” he says. “We need local partners to conduct specialist inspections, structural assessments and collections assessments. Otherwise damage can go undetected for years. That is the sort of research we need from heritage practitioners across the sector in the months and years ahead.”

Once verified evidence is established, the coalition are sending it to the International Criminal Court.

The Ukrainian government plans to wield this information as evidence to convict Russia of war crimes. The data will be used “for the criminal prosecution of those involved in crimes under Ukrainian law at the International Criminal Court in The Hague and a special tribunal after its establishment,” according to a statement on the website.

But the intricacies of international law will have to be pre-empted so the evidence accrued can directly help to hold those responsible to account. In a recent column for The Art Newspaper, Robert Bevan wrote: “Cultural genocide is, itself, not recognised as a crime internationally—but attacks on culture may prove evidence of genocidal intent.”

Russia’s attack on Ukrainian culture is not limited to bombs falling from the sky; the trafficking of Ukrainian artefacts must be verified too. The efforts to track stolen artefacts is both professional and voluntary, from the highest levels of Interpol to spontaneous collectives gathering on Telegram, Whatsapp and Instagram. Interpol has uploaded 218 Ukrainian artworks on its ID-Art mobile application. Each piece is known to have been illicitly trafficked from Ukraine, either before or during the war.

Then there is the Instagram collective Divchata, a voluntary initiative designed to help Ukrainian artists and museums maintain a database of art that has been evacuated from the country.

At Icom, officials are also working on devising an emergency red list for Ukraine—an exhaustive database of cultural objects. Typically, a red list takes around a year to complete; this is being created in a matter of months. Overseen by Delepierre, the list is a categorised inventory of cultural objects within the collections of recognised Ukrainian institutions and which are at imminent risk of being stolen. The list will be distributed to law enforcement imminently.

“We say to collectors: keep your eyes open and be careful,” Delepierre says.